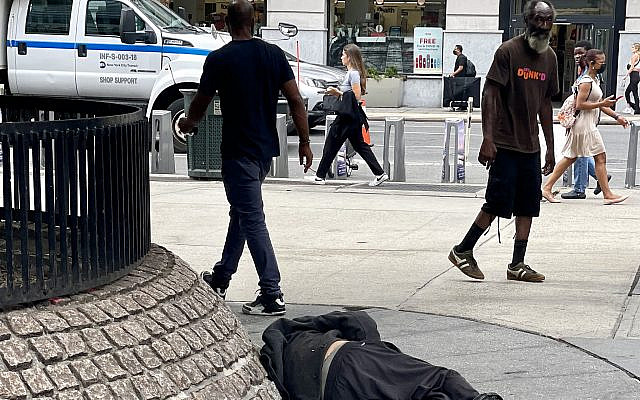 Where are the happy Americans? 20 years after 9/11, a recent visit strikingly underscored the gloom. A central reason is that despite undoubted progress that has been achieved in recent decades, America is now beset by a debilitating case of extreme tribalism.

A few years ago then-Israeli president Reuven Rivlin challenged a century’s worth of Zionist efforts to create an Israeli people by declaring in a landmark speech that the country is divided into secular, ultra-Orthodox, religious and Arab “tribes.” Only the extreme left (with its illiberal identity politics) and  extreme right (with its hatred of the Arabs and strategic myopia) could welcome this vision. But he did have a point, and it goes beyond Israel.

In America everything is bigger, so at least eight tribes can be observed: Evangelicals, the white working class,  establishment Republicans, educated liberals, progressives, those for  whom sexual or gender issues are identity, and those who identify via a minority ethnic status (which mostly would not include the Jews, who prefer to classify by political leaning). And it’s no simple left-right split: the establishment right wants low taxes not Trumpist  arson; the liberals may seek social justice but they also believe in individualism and  merit and recoil at the obsessions with identity and appropriateness as policed by Twitter mobs.

The country has long been torn between the opposing ideals of “melting pot” versus “mixed salad” – and the salad is ascendant.

This is so first in a reaction to the considerable racism in many parts of the right. America is about to lose its white majority in favor of the informal alliance known as “non-whites” (leaving aside that the calculation includes many white Hispanics). This leaves many whites in anger and despair. Hence the right’s efforts to undermine democracy: it’s  why Republicans are trying to suppress voter turnout among non-whites; it’s  why the right has no problem with a voter from overwhelmingly white Wyoming having the impact of 70 in  minority-packed California in the powerful Senate (because of the hyper-federal political system ) and four times more impact in presidential elections (due to the twisted electoral system).

The salad is also on the rise because of the identity politics of the progressives. For them, the most important association in life is group identity as it relates to origin or race or sexual or gender preference, or even socio-economic status – but never national identity.

This upsets those who care about the nation – but the progressives will say identity was always the driving force in politics, just that only the white man’s was counted. Many of them now argue that almost every existing mainstream social structure — including standardized tests and even the ideas of ​​excellence and meritocracy — are inherently exploitative. They have little interest in the liberal view that sees a human’s identity as the individual: nearly eight billion identities on earth, with more arriving by the day.

It is a little sad to contemplate Martin Luther King, the African-American icon who famously longed for a world where his children’s children would be judged by their content of their character and not the color of their skin. Today he might find himself torn to pieces on this point by the progressives of Black Lives Matter (much as they would agree, of course, on the scourge of racism).

Not only is skin color the dominant factor by the progressives of our era, but it’s also OK to oppress one particular group. It is hard to find anything similar in the democratic world to the complete acceptability in many American circles now of saying: “Not another white man.” One could argue that such are the wages of millennia of patriarchy, and this is not without some logic. But it’s also true that many white men, particularly the uneducated ones with no hegemony to enjoy, feel abused. And when they complain about discrimination the answer is not a denial but the blithe and somewhat triumphalist assertion that “it is someone else’s turn to eat.”

This is the main reason why even some otherwise reasonable people found themselves voting for a candidate like Donald Trump. It is easy to dismiss as mere bitterness at privileges lost – but the truth is that there are also those among them who genuinely oppose what they see as a terrible mistake. Ironically, this mistake can be defined as an abandonment of liberal values. Perhaps most uneducated whites do not see it (certainly not in the U.S. where the world “liberal” has been distorted),  but their interest lies in liberal values.

I always favored affirmative action in a measured and reasonable way; in which an acceptable degree of meritocracy can be maintained while steps are taken to give  the marginalized voice and market failures are corrected so that equality of opportunity is real. I certainly do not deny that the older generation of white men (the older generation) still enjoys advantages. But the extreme reaction visible in today’s media, academia and corporate world might not breed a better society; it seems to be creating a situation where everyone is somehow angry.

The “right-wing tribes” are unhappy that Democrats are in power, even though much of their agenda – from the infrastructure bill to expanding health insurance – benefit poor whites. They see before their eyes mainly the  “thought police,” “cancel culture” and strange mantra about “defunding the police.”

The “left tribes” are dissatisfied because they see themselves besieged by a Supreme Court whose large conservative majority was obtained through trickery. They feel injustice because of an election system that requires their side to win by about 6% in order to actually win. They cannot even find succor in  predictions about a natural majority that awaits; this notion assumes the Hispanics will forever remain on the left – but Hispanics are quite socially conservative. If the Republican Party stops gets out of its own way by ending its flirtation with White Supremacists, a flip is possible.

For evidence of where the wind is blowing, look to the draconian new Texas law bizarrely deputizing citizens to sue anyone abetting abortions, which the Supreme Court refused to block despite its clear violation of Roe v. Wade. And wait for the upcoming review of Mississippi’s request to in effect overturn Roe v. Wade, which will be heard in several weeks. There is a chance this will happen, whereupon about half the states may follow Texas. In liberal places like California, the fashionable talk will be of secession.

So that’s the lay of the land: no to crude jokes, social safety nets or abortions; yes to the death penalty and the provision of weapons to any nut; liberals horrified by both the left and the right; and a cloud handing over the indispensable nation.

It’s hard to say where all the anger began. Was it Trump, whose weird disruptions,  abandonment of decorum, and toxic persona drove so many people mad? Was it liberal successes (seen by half the country as excesses) in areas like gay marriage, that so upset the religious – or the election of Obama (or going back further, civil rights) that so upset the racists despite the societal advancement that it signaled? Was it political correctness? Globalization? The internet bring too much change too fast? The freeing of the slaves??

All may be factors. But if you ask me, America’s descent was certainly also accelerated by the terrorist attacks of September 11, 2001. It still remains incredible that they worked so well, as if satanic intervention was involved. The attacks contaminated America by unleashing a wave of reflexive patriotism that could be twisted into illiberalism and aligned with the politics of wider grievance and despair. It brought a bad karma palpable as never imaginable before, and last week in New York City I still felt its poison in the air.