The Blogs
Shannon Nuszen
Apply for a Blog
Advertisement
Please note that the posts on The Blogs are contributed by third parties. The opinions, facts and any media content in them are presented solely by the authors, and neither The Times of Israel nor its partners assume any responsibility for them. Please contact us in case of abuse. In case of abuse,
Report this post. 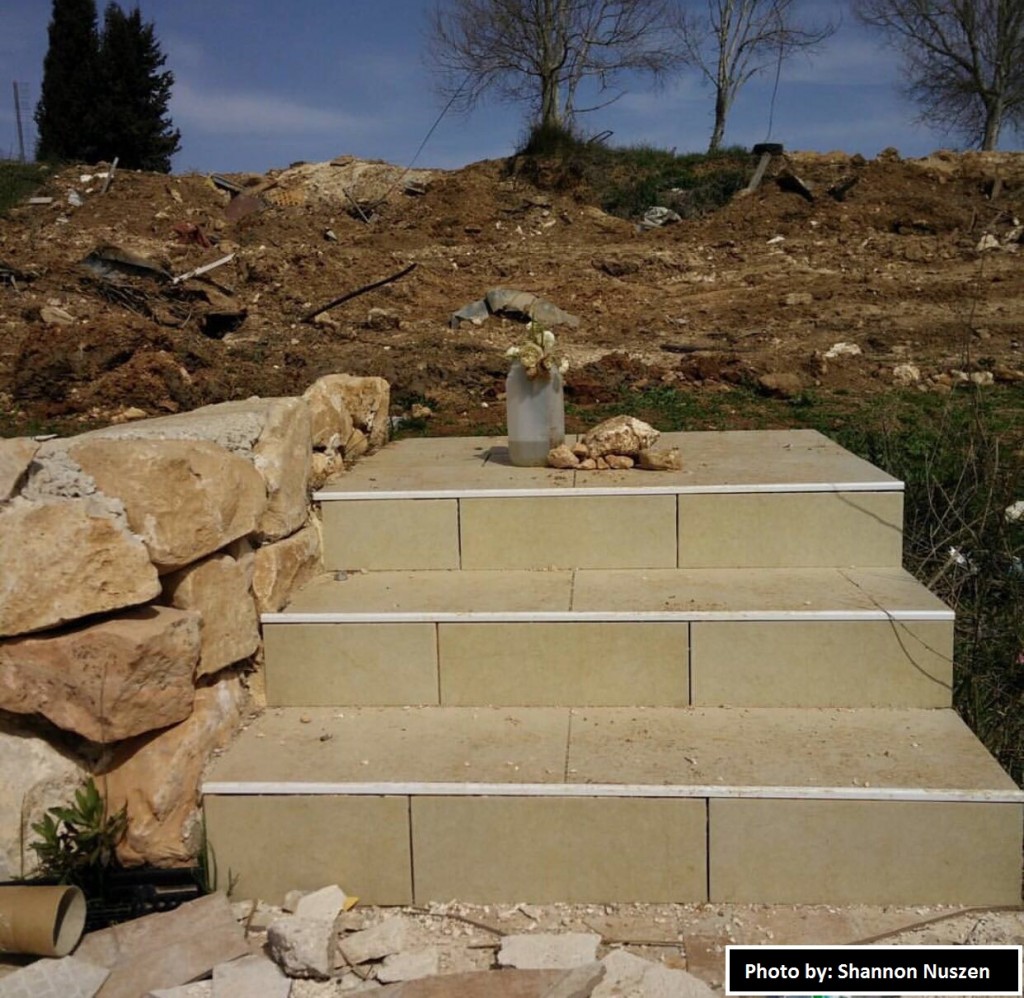 The only remains of what was once home to an Amona family.  Photo by: Shannon Nuszen

When 42 families and over 200 children were evacuated from Amona, a hilltop community overlooking Ofra in the middle of winter, they were given temporary shelter in the dorm and promised alternative housing within 2-3 weeks. It’s now been 5 months, and the families are still there, with no end in sight.  Although the area was declared by the court as private Palestinian land, there is no evidence of prior ownership, and no documentation was produced to the court in order to validate the claim made.

The shelter in Ofra is a girl’s high school dorm, with narrow hallways, and multiple small rooms.  Each family was given a room, sometimes 2, depending on their size and needs.  The Ziv family of 8 has 2 connected rooms, each measuring 3×7 meters.  The 6 children (ranging from 5-17yrs old) are in one room situated with 3 sets of bunk beds.  A tiny sink separates them from their parent’s space next door, which is where Elad and his wife Sarah sleep.  It’s also where the family’s clothes are stored, and where they try to serve breakfast each morning on a small TV tray, before the children head off to school.

There is no space for families to prepare meals individually, so an eating hall was set up to serve the residents twice a day, cafeteria style.  In the beginning, meals were provided at no cost.  Today, families must register and pay for the meals.  The same type of food is served every day, so it gets tiring and often difficult to make the children eat, but the families are thankful for the accommodations.  “It’s especially difficult for children with food allergies, or special dietary needs” explained the Weiss family.  It’s understood that the destruction of Amona was a government decision, and that the regional council is doing as much as they can to care for them in the aftermath.  “We have tremendous gratitude for the provisions given to us by the Binyamin regional council.  But, this was supposed to be a temporary situation.  This is not an environment for families.  Netanyahu himself came to us in Amona and promised that our homes would be replaced on an alternate hilltop within 2-3 weeks.” said Elad Ziv, an Amona resident for over 18 years. 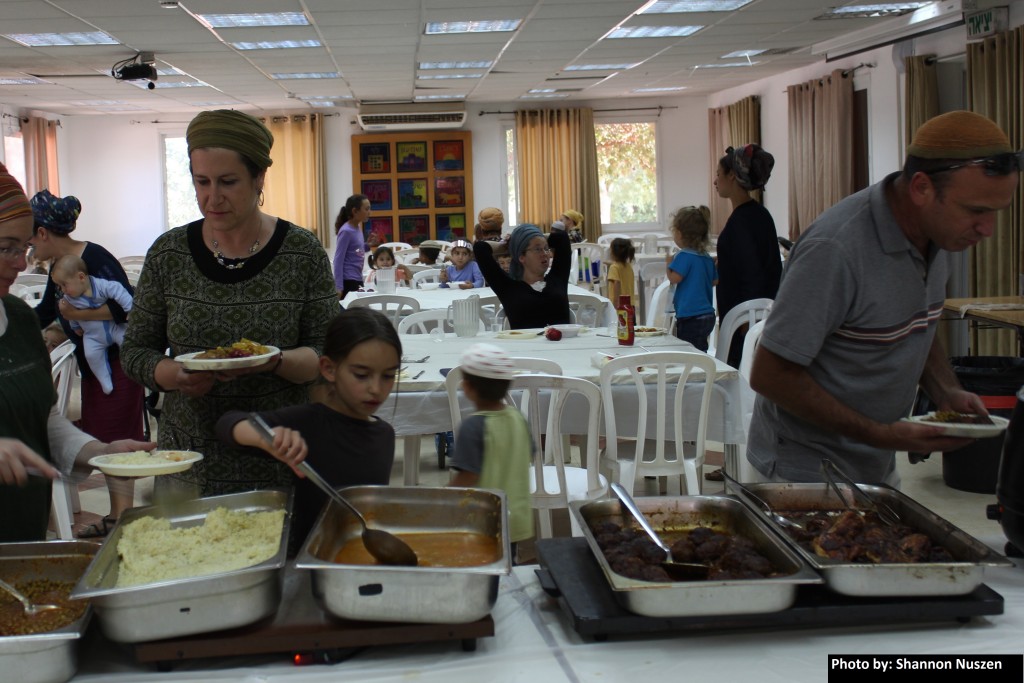 The living quarters are barely enough room to sleep.  There is no space for relaxing, or spending time together as a family.  However, the alternative is for each family to disperse throughout Israel.  This is not what any of the residents of Amona want, or were promised.  Throughout their life in Amona, they developed strong connections with the land, the homes they built from scratch, and the other families who built alongside them.  “We’ve been through so much together as a community.  These are life-long friends, and our children have grown up with neighbors who are more like siblings than just the kids next door.  We’ve witnessed the destruction of our homes, our land, our rights, and in many ways our dignity.  If we leave now, and give up on the goal of resettling as a community, then we have succeeded in allowing them to take everything from us.  This is the only thing we can hold onto, and we must.  We must continue to draw from our strength as a family, and we have decided that we will remain together.  If we don’t, Amona, which is so dear to us, will soon be forgotten.” Ziv continued.

Parents of older teens expressed great concern for the youth, explaining how difficult it is for them to have absolutely no privacy, sharing their space with their parents and up to 6 younger siblings.  In such closed, confined spaces, there is simply nowhere for them to go.

Almost immediately, the youth began taking a daily trek up the hill to visit the ruins of their former homes.  It became a daily ritual, that only seemed natural after getting off the school bus each day.  They would return “home”, and to the youth of Amona, that hilltop is the only home they have ever known. 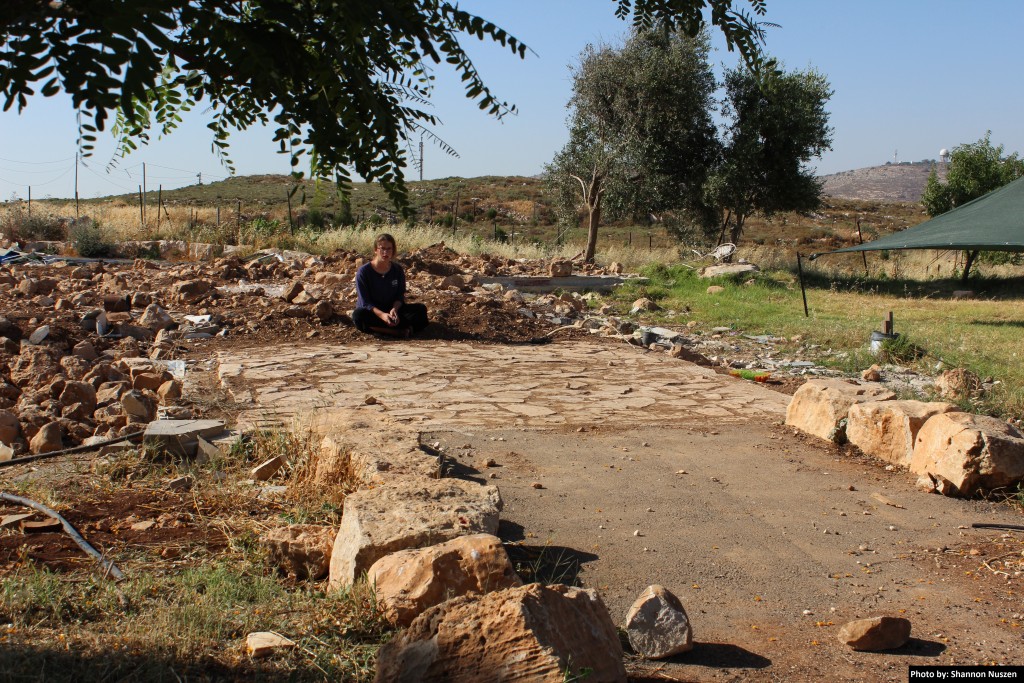 Amona teen sits at the front entrance to her home on the demolished hilltop.  Photo by: Shannon Nuszen

Seeing the piles of trash, debris, and rubble that was once their home, was unbearable.  Seeing the land that they loved left in such filth and disarray caused aching deep inside their soul.  The anger and sadness would consume them each and every visit.  Some days they would scream in anger, and share with each other their feelings of betrayal and distrust.  Other days they would cry for hours, holding and consoling each other.  It wasn’t long before this tremendous ball of emotions erupted into a call to do something.  So, they did. 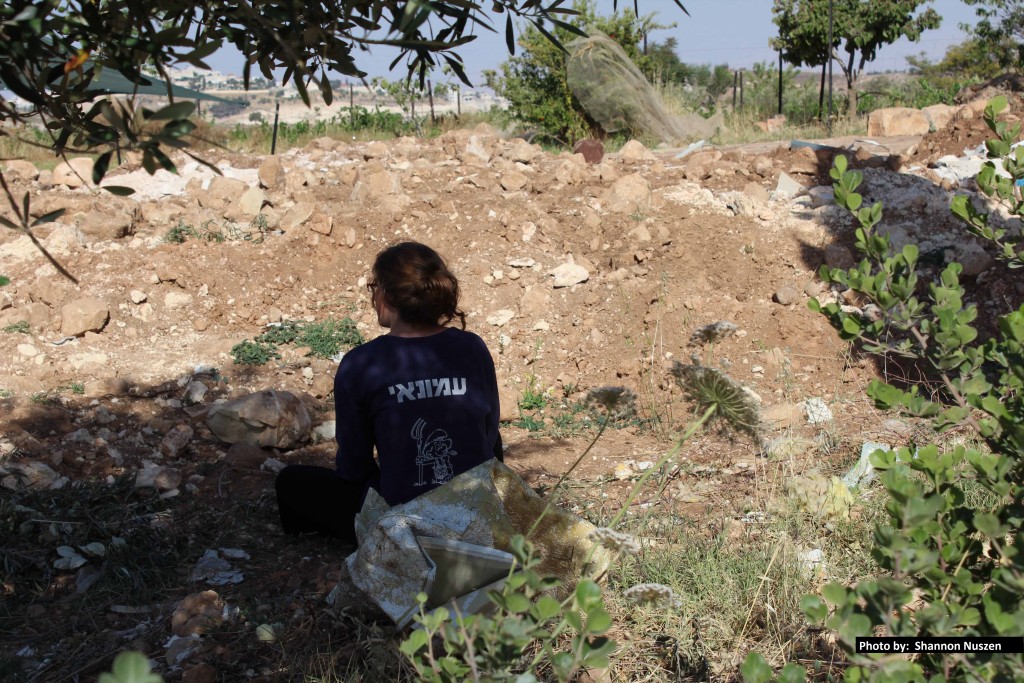 Tamar sits inside the ruins of her home, in the area where she says was her bedroom.  Photo by: Shannon Nuszen

They turned their desperate attempt to escape the confines of the dorm into a chance to fulfill their own dreams, and to restore what had been ripped away from them.  They began to focus all their energy into reclaiming what was theirs, creating a place where they could pray, a place to dream, and to hope.  They began a mass cleanup of the entire hill, and committed to rebuilding.  They worked tirelessly.  An abandoned archeological site from the byzantine times provided perfect walls where they could create a space of their own.  They salvaged what they could from the wreckage to build a shelter.  They made support beams, and attached aluminum sheets to make a roof.  They connected electricity, and brought in lighting with extension cords.  They made themselves a small kitchen, complete with a warming plate, hot water urn, and a tzeduka box (charity collection).  A floor was made, and lined with mattresses.  They gathered fruit from the surrounding trees.  Some pledged to live there, never returning to their 3×7 room in the midrasha.  They talked about how much they loved the land, and how they didn’t need to depend on anybody else to survive; the land that they’ve loved since their birth would take care of them. 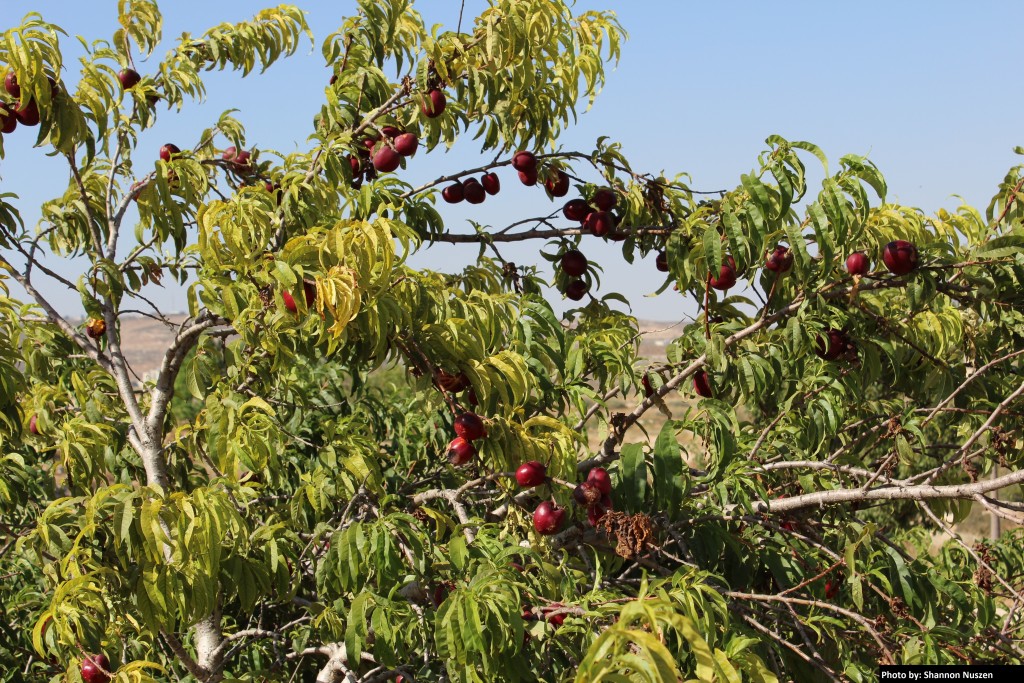 Fruit trees on the Amona hilltop are in full bloom and being harvested by the youth.  Photo by: Shannon Nuszen A door made of pipes secured the entrance of the youth fort.  Photo by: Shannon Nuszen

Most Amona parents were unaware of the structure being built by their teenagers on the hilltop where their homes once stood, until the IDF came to destroy it this past week.  “In the chaos that our lives have become, it’s impossible to manage a normal family structure.” said one mom as she struggled to speak to me over 2 toddlers fighting for her attention.  “We don’t see our children most of the day.  They run freely through the compound, simply because they have no place to be.  They can’t be expected to stay in the rooms.”

Unfortunately, Amona is not the first community to be demolished by the government, and as a result we have case studies and statistics on the psychological damage such an event has on families.  After Gush Katif, many young people were treated for severe depression.  Most were filled with anger and frustration, turning to drugs, alcohol, vandalism, and in general wreaking havoc wherever they could find it.

Although the IDF deemed the Amona youth’s actions illegal, when the parents of the teens found out what their children had been up to, they were relieved and proud.  “They know every tree and rock on the hill, and every spot has meaning to them.  The attachment these kids have to this particular plot of land is something that people just don’t understand.  It’s not like anything you’ve ever seen before.” explained Yifat Schwartz, a resident of Amona for more than 20 years.

Those who witness the space commented on how the youth had made an amazingly clean space for themselves.  It was well organized, tidy, and functional, complete with a charity collection box, and daf yomi (religious study) books inside an indented wall space.  What the IDF found in the youth space didn’t surprise me as much as what they didn’t find.  Not even one container of alcohol was found.  There was no sign of any drug paraphernalia, and no risqué magazines.  There was no graffiti, and no vandalism.  The space was clearly not created to cause trouble.  These young pioneers were building a home, no different than any other children who put into action their dreams of building a magnificent fort or club house.

Last week however, the IDF once again ascended the hilltop on a seek and destroy mission.  In light of the recent news about the approval of new homes for the residents of Amona that we’ve been hearing for weeks now, it seems absurd that the government felt it needed to lash out against the teens of Amona and destroy this small structure.  If new homes are going to be built on a nearby hilltop, one would think that the problem would resolve itself soon.

The youth of Amona however, are not deterred.  They are determined to rebuild, again and again.  They are confident that one day their struggle will be rewarded. 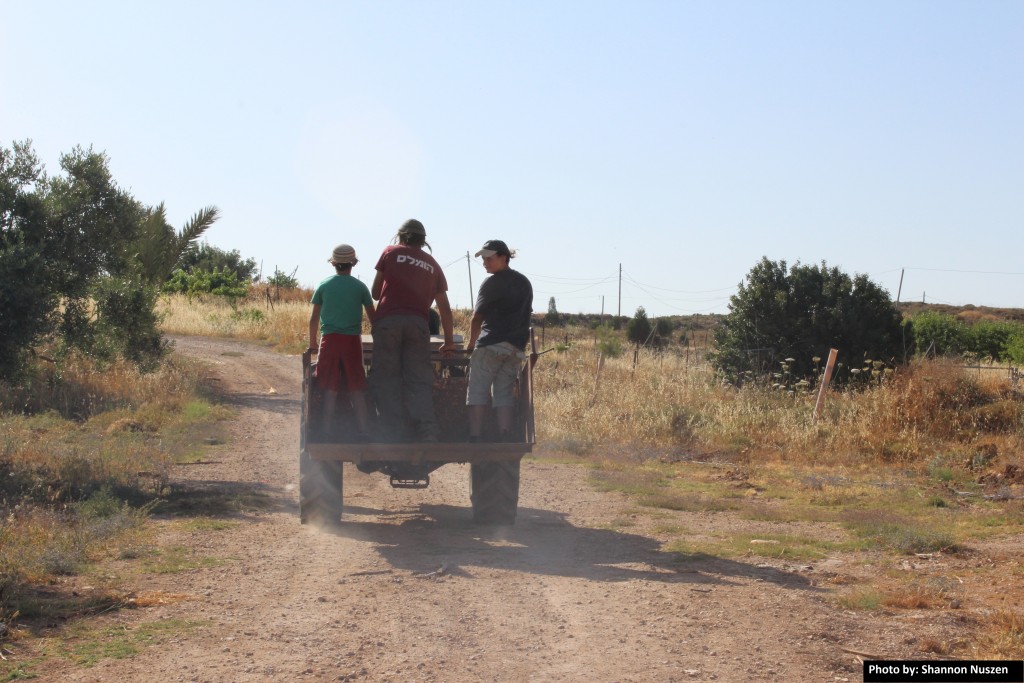 Amona youth cruising the hilltop in a search for usable materials for the fort they will build again.  Photo by: Shannon Nuszen 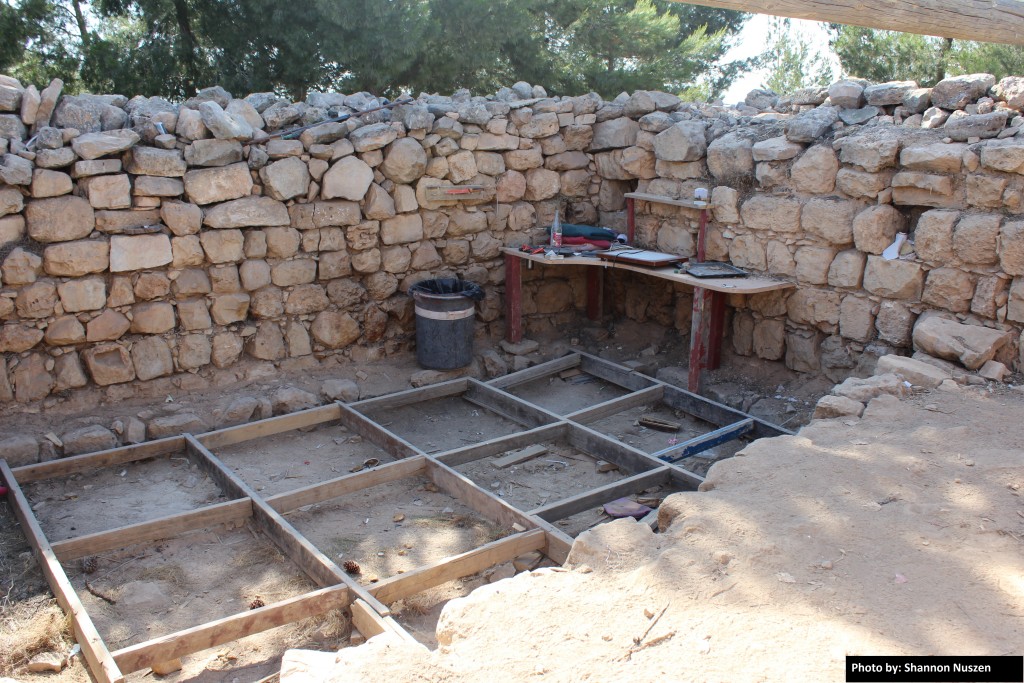 The beginnings of a rebuilt space for the Amona youth seeking an escape from the confines of the dorm rooms.  Photo by: Shannon Nuszen

Elad and Sarah Ziv are hoping to move their family into temporary housing on the newly approved hilltop soon, allowing them to finally move out of the confined rooms in the midrasha.  As of today, even allowing the families temporary housing on the hill is still yet to be decided.  The Ziv’s are concerned about how long their family can continue in the current situation.  They are worried about the long-term effects such instability will have on their younger children, and how much destruction their older children can endure before breaking, and becoming another sad statistic.  How long will they ride the up and down roller coaster of back and forth government decisions?  It may be years before they finally get through all the red-tape to build permanent homes.  In the meantime, will they be permitted to reclaim their dignity, and live like a family unit in a place of their own?  They are looking forward to returning to normalcy, living like a family once again, sitting on a couch together, playing the piano, hearing their son on his drum set, preparing meals in their own kitchen, and eating together at the Shabbat table.