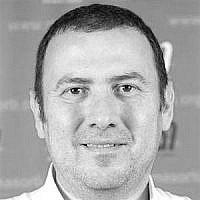 A few months ago, while I was writing a Torah scroll, I had a flash of philosophical insight. After writing a few lines, I stopped to clean the quill (the quill in my left hand and the cleaning cloth in my right) and I thought of the drops of ink in my inkwell.

Any ink drop might find its way to one of the mentions of the Divine Name or might easily end up on the cleaning cloth. All the ink drops are together in the same inkwell, yet for some reason — although they have the same potential — their end is not the same.

Some ink drops will compose the holiest word in Jewish tradition, the Divine Name, and will never be erased, while others will end up on the cleaning cloth and eventually in the garbage heap.……..

The liturgical hymn Unetane Tokef  that introduces the Kedusha in the Mussaf prayers of the High Holy Days, refers to this point in depth.

In this prayer, man is described as being derived from dust and returning to dust in his end.  Man is compared to a broken shard, to dry grass, to a fading flower, a passing shadow, a fleeting cloud, a blowing wind, scattered dust and a passing dream.

The bard uses eight comparisons to illustrate the transience of man’s life and its value.  Yom Kippur diminishes man’s value as opposed to the supreme greatness of the Lord of the Universe.

However, nevertheless, in spite of everything, our prayer book teaches us that we can change. A broken shard cannot be restored. We, however, can change our ways. A scribe is not capable of choosing which ink drop will be a component of  Divine names and which will end up on the cleaning cloth.  But we are capable of choosing what to do with our gift of life.

Shall we make our life a blessing or a curse?………..

The Magid of Kamnitz gave us the following parable:

In an important exhibition in a large museum in Paris, an impressive wooden cabinet was on display, the handiwork of a master craftsman.  It contained several niches and cubby-holes, shelves and revolving or removable drawers. It could store silverware, gold, diamonds, and valuable documents.   This cabinet was the talk of the day at the exhibition and the master craftsman who had made it was awarded a gold medal in the competition that took place there.

An extremely rich man from the royal city of Vienna bought this cabinet for a big amount of money. He placed it in his palace and boasted of it to all and sundry.

However, the wheel of fortune turns in life and this rich man lost all his wealth. All his possessions were sold to cover his debts. No seller or buyer realized the quality of the cabinet and it was sold as a piece of junk and bought by a poor shoemaker for a pittance.

The shoemaker put his pieces of leather in the space designed for glassware. He put nails in the drawers meant for silver and gold objects. He put wax on the velvet-covered shelves.

One day the master craftsman who had made the cabinet visited Vienna.

As he was touring the city, the sole of his shoe came apart. He looked for a shoemaker to mend his shoe.  He found the place of the afore-mentioned shoemaker and entered .

While the shoemaker was mending the shoe, the craftsman looked around and saw the cabinet that had once been so beautiful. It stood in a corner leaning sideways because a foot was missing. Many decorations were missing too, and the wood was scratched , stained and covered with dust.

The craftsman fainted. The shoemaker called passers-by to help him and they revived the craftsman.   When he came to, he wept.  “See what they have done to my cabinet,” he cried bitterly.

How could he not cry at the sight of what had become of his masterpiece?……..

The Magid of Kamenitz concluded: the Lord created man in wisdom and gave him in his soul several sections, cells and hidden drawers.

A section for a measure of modesty. A drawer for wisdom. A shelf for holiness.

But there is a man who chooses to store pride in the place meant for modesty. Another stores foolishness in the drawer meant for wisdom. A third, alas, stores worn shoes on the shelf of sanctity.

Man’s spiritual existence is designed by his own choice. He will be the one to choose what to store in his soul.

As is written in Parashat Nitzavim: “I call heaven and earth to record this day against you, that I have set before you life and death, the blessing and the curse: therefore choose life that you may live and your seed after you.”  (Deuteronomy 30, 19 ).

May we be blessed with understanding and know how to fill our spiritual cells with virtue. May we be inscribed in the book of a relevant life!