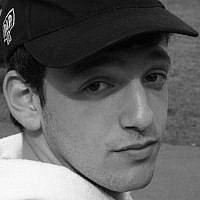 Staff Sergeant (Res.) Noah E. Abramowitz, at your service. Allow me to introduce myself: 23 years old next week. I finished a year in Yeshiva, a year in Hebrew University, and two and a half years in the IDF since I left my birthplace in Baltimore, MD, five years ago. The plan was a year of yeshiva, a near full scholarship at YU, and Semikha afterwards from YCT. Mann tracht und Gott lacht, am I right? I like reading a lot of your work, because I think sometimes people aren’t ready to say what you are, and you say it right, and you say it well. Except, I think this time you went too far.

I’m the same Noah E. Abramowitz who, with God’s help, next year finds himself heading out to a yet unconfirmed destination to teach Torah, coordinate youth activities, and maybe even teach a word or two of Hebrew to Diaspora Jewish Youth. I mean, I’m hoping for some exotic destination, Australia would be nice. But if it’s America, so be it. Then again, maybe not, because, from what I understand, “Israelis donate virtually nothing to support the American Jewish Community,” so I guess my services there are unneeded, or, more accurately by your approach, unavailable for your use.

I mean, I really want to go help other Jewish communities. Or maybe it’s a waste of my time, right? It’s not that I care too much about them right? Some of them might be Conservative, or worse, Reform. God forbid I could support a Jewish brother like that, right? Because, from what I understand from what you wrote, I, as an Israeli, “reject every Jew that the ultra-Orthodox deem invalid.” Right, no time for those.

Well, maybe you guys should help yourselves if all the above are true. Then again, from what I understand, Chutz La’aretz is no picnic. I’d love to send some security guards from elite units your way, to protect some synagogues or JCCs or whatnot….but I guess we could use those guys here in Israel, after all, why would Israelis “use their influence to combat those fueling anti-Semitism” abroad?

Seriously, my brother, I am here for you, with nothing but love and affection. I mean, I get scared for America when I see certain events taking place, and I guess my Israeli instinct of calling for proper gun regulation and such should really be valid in this discussion as a firearm owner and a concerned citizen…but I’m guessing you yourself might think this view is invalid because “you don’t live here?”

You speak of Israelis. You speak of “the ugly Israeli,” the one we’ve heard of in the papers, the violently vocal, overly opinionated, occupying and preoccupied caricature you’ve seen over and over. But the same caricature you draw here could be drawn about any other group, and then it would be xenophobic, racist, sexist, you name it. Evidently, generalization is alright here. I mean, we’re used to a double standard, but we expect it from the world, not from our brethren. Maybe that’s what makes it hard when I talk with J-Street activists. But alright, now’s not the time.

You seem to think it’s perfectly acceptable to throw all Israelis under one label, that of what you find wrong here. Why then is it shocking that we have our own labels for Americans, and American Jews specifically? You seem to think it’s fine to label us all as Hareidi sympathizers, something you clearly find unfair. Mind you, I find Hareidi control of the Rabbanut dangerous, and work against it. But, at the same time, you don’t acknowledge that people like me exist. You throw us all under another label. Why should I work to have labels removed when you seem to be find utilizing them yourself? You seem to think that the Shlichim the Sochnut sends out, not to mention those from the Mizrahi and the other various movements, are “donating virtually nothing”. If our work is worthless to you, don’t tell us we don’t do it. We do, we just don’t really feel appreciated when we hear stuff like that, kills morale, you feel me?

With regards to leverage, I can say personally that I didn’t vote in the 2016 elections because I knew that it is wrong to express one’s opinion on a matter they can’t fully understand. I am not fully involved in America anymore, and for that reason I can’t understand the matters, and therefore I did not vote. Call it what you wish, I call it consistent. If I don’t want you telling me how to run my country, I will ensure I’m not being a hypocrite. Mind you, it’s my right to vote, but the consequences are not my yoke to bear, so I did not vote.

Antisemitism is an interesting point. I agree that perhaps more needs to be done, but Israeli security agencies are in fact constantly on the look for guards and agents for abroad, and that should not be ignored.

But Rav Shmuly, you missed a point, or maybe you took it as a given. Either way, it was not addressed in what you wrote: this relationship is in no way one-sided.

My grandparents, who should live and be well, were dedicated fundraisers for the state of Israel. They met influential leaders all along the way, and one day, my grandfather wrote to Ben Gurion, asking whether his efforts in America were more important than his dream of making Aliyah. Ben Gurion responded by reminding my grandfather who won the revolutionary war: it wasn’t the financiers in Britain, it was those with their feet on the ground in America.

We here in Israel do what only we can: we ensure the Jewish future. Dr. Yossi Beilin, one of the main figures in the Oslo Accords, stated that the purpose of the state of Israel is to ensure that his secular grandkids know what Lag BaOmer is. I couldn’t have described it better. Israel is the home of the Jewish people, and we put our efforts into that, first and foremost. This is the security fund, the insurance policy, of millions of Jews worldwide, not to mention the clear beginning of the Redemption. We might not give you our money, but we give you our lives. We defend this country with some of the best years of our lives, and we keep it running day by day. The sums do not add up, you are right. We are talking currencies whose difference is like that between Heaven and Earth.

We run the economy and build homes, basically nurturing this wonderful insurance policy we call home. We keep this place safe, and we spend our lives making it better. Yes, the rabbanut monopoly on Judaism must be broken: we are already seeing results with Tzohar’s Kashrut taking off, more is yet to come. We send Hebrew teachers and young people to college campuses and day schools, we celebrate the cultures from where our Olim arrive, and above all, we encourage more to do the same.

There is room for improvement. I don’t think we can rest on our laurels and think the state has reached as high as it can. But to tell us that Israelis don’t care enough? Come visit, brother, and I will show you quite the opposite. I’ll introduce you to folks who care dearly about diaspora Jews, of all shapes and sizes, and I’ll show you people who want to give back. But the most important thing which can be done is for people to arrive here, become citizens, and influence change from within.

Looking forward to your response, and Shalom Al Yisrael.