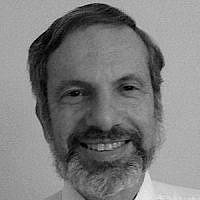 The Blogs
Steve Koppman
Apply for a Blog
Advertisement
Please note that the posts on The Blogs are contributed by third parties. The opinions, facts and any media content in them are presented solely by the authors, and neither The Times of Israel nor its partners assume any responsibility for them. Please contact us in case of abuse. In case of abuse,
Report this post.

When I saw Daniel Gordis’ “Israelis don’t care that you’re insulted: An open letter to American Jews” from the TOI blog last week, I knew it had my name on it.

What most impressed me was Gordis’ mastery of the endless self-justifying sophistry that apparently protects many Israelis from caring about the subjugation and periodic slaughter (e.g., Gaza, 2014) of unlucky Arabs while letting them call the state a “democracy” though ruling nearly 3 million “Others” without rights or vote for 50 years and imposing suffocating blockade on 2 million more such non-voters.

As American Jews, Gordis says we must accept all this since we don’t have ‘skin in the game.’

Gordis tells us we must support our Israeli family. Defining morality by whatever one’s family does or wants was the world’s default ethic before emergence of Judaism, whose universal morality is often seen (by us, I thought) as a profound advance. Yet amoral familism is exactly what Gordis, like Israel’s leaders and many rabbis and community leaders use to round us up behind the state’s unconscionable practices.

Gordis’ open letter of course well expressed a widely-held Israeli position – with characteristic condescension toward both Arabs and American Jews: Israelis will keep doing what they feel like to Arabs for the rest of history, and we should shut up and send money and support.

The closure of mind and heart seems thorough. It’s the same argument we’ve heard for 50 years and it’s no better in the re-telling.

Israeli Democracy: “Just For Us”

As we know, the basic rule of democracy is: Governments derive their just powers from the consent of the governed. Nowhere else in the modern ‘democratic’ world does one people claim a permanent right to rule another and bomb them when they resist. Sorry, colonialism’s days are happily over in most of the world and Greater Israel is not a democracy.

Let Them Vote or Let Them Go

Israel before the State — “the Jewish People” the United Nations agreed should share Mandatory Palestine — was of course a moral as well as an ethnic community, with a broadly shared ethos. ‘Let My People Go’ rang across history.

Jews worldwide defined themselves for millennia against the cruel empires wielding illegitimate power across the world. As a Jewish and American kid, I actually grew up thinking, as I know did many others, that every fight for freedom was my own.

Today’s state, which has commandeered our identity on the world stage despite no commitment to this morality (‘Love the stranger?’ ‘What, me worry?’), has done what Hitler couldn’t do, reversing the moral posture of the Jewish people worldwide as it excuses permanent oppression as the natural order in its realm, decrying any other view as a doubtless ‘anti-Semitic’ “double standard.”

This state demonstrates daily through its actions a basic ideology directly contrary to historic Jewish morality, shared much more with those who Jews abhorred: The Pharaohs, imperial Romans, modern-day totalitarians, an ideology that says: Some people’s lives matter – and some people’s don’t. (And we decide which.)

For subject Arabs, the State has become czar, cossack & pogromitchki. It debases us all as Jews, wherever we live.

Can a state that rules over others against their will truly be a ‘Jewish’ state at all just because most of its people call themselves “Jews”? Shouldn’t a ‘Jewish state,’ to meet that description, subscribe to Jewish moral principles?

This is the tremendous cost of Gordis’ “greatest accomplishment of the Jewish people” (an Israeli state). I’m not so sure. The Jewish People that now has a state is something totally different — and, in many ways, opposite — from what it was. At the risk of citing a Christian source, I can’t help thinking: “What do we profit if we win the whole world and lose our soul?”

Occupation, again, is a form of dictatorship, a contravention of democracy. Before the state, virtually all Jews (and Americans) would have agreed that resistance to tyrants and occupiers “by any means necessary” was totally justified. But Gordis (like many Israelis) from my perspective betrays Jewish history as he calls such resistance “murder” and “terrorism” when directed at Israelis, who he sincerely seems to feel have every right to rule Arabs as tyrants, apparently indefinitely.

Gordis writes like the state is fragile as a feather and surrounded by intransigent all-powerful enemies, like it’s May, 1967 or maybe May, 1947, or even 1943 in Europe, that Sadat never came to Jerusalem, as if the entire Arab League didn’t in 2002 accept Israel behind the Green Line, as if even the perpetually demonized leadership of Hamas hasn’t agreed over and over they would accept any agreement Palestinians voted for in a referendum, and that Israel doesn’t have a huge stock of nuclear weapons, the world’s best technology and the unflinching support (and unbounded generosity) of the only super-power.

Yet everything the state does to Arab “Others” is justified by Gordis by “fear” and the “security of our children,” dangers we in ‘safe’ America — huh? — can’t understand because we don’t share them (and therefore have no ‘cred.’ ) This fear apparently justifies permanently occupying other people. Let’s call this the scam it is.

Look at the numbers of terrorism’s admittedly terrible toll in Israel and you’ll see Jews in ‘safe’ America are more in danger of violence, yet have no chance (or imagining) of an Israeli solution of conquest, occupation and occasional slaughter to heighten our sense of security.

Though it’s moving to hear Israelis like Gordis dramatize their very understandable feelings for the lives of each of “our own people,” it’s equally sickening to appreciate the coin’s other side: Indifference not only to ongoing oppression of Others but their periodic slaughter, their casualties typically exceeding ours by a hundred times. No one can claim with a straight face that killing a couple of thousand Arabs in Gaza, including hundreds of children, is essential to Israel’s security.

While the state has a great effect on American Jews, it’s not necessarily always a good one. Few things have undermined Jewish identity in the US like the perpetual Occupation and the Gordis-Israeli view of the world that sustains it. Some people think the rise in intermarriage rates from 15% to 75% in the 50 years since The Six-Day War has nothing to do with the state and its refusal to let Arabs go. Have they talked seriously to young American Jews?

Gordis talks as ever about more Americans making aliyah. As everyone knows, huge numbers of Americans of all ages travel to Israel and virtually none stay, which has been true for generations. In my opinion and experience, the climate of Israeli thought embodied in Gordis’ piece has something to do with that too.

There’s always the historical kicker: We’ve offered them peace and they’ve refused. The Jewish community of Palestine of course accepted partition. Terrible things happened in 1948 and 1967. So we subjugate the grandchildren and their descendants for the rest of history? Does the U.S. still occupy Germany and Japan?

Of course there are many, many Israelis determined to treat the Arabs with humanity, for both moral and strategic reasons, including some who become prime ministers. But the clearest historical evidence is that reaching out to Arabs under current Israeli political circumstances gets Israeli leaders shot or drummed out of office. It was never clear in fact that any of these leaders could deliver on their admirable offers. While Barak and Arafat met at Camp David, surveys back in Israel showed opposition to most of what Barak was offering, a rising political tide against him. Both Barak and Olmert offers were still in negotiations when these men were pushed out by those unwilling to continue them.

But the onus is on the Palestinians to drop their pants, promptly agree to Israeli proposals, even with leaders likely unable to deliver and soon to be ‘democratically’ swept out of office. An Israel-Palestine agreement is inevitably going to take negotiations, so a supportive citizenry is required, not offers that are here today, gone tomorrow. The Gordis/Israel ace-in-the-hole — “The Arabs always refuse peace” — is unfair, a historic scam we play on ourselves to invalidate Arab grievances.

If and when the state is serious about peace, let it put its best historical offer back on the table. And leave it there. That’s what’s needed, all the more so in dealing with a less advanced, less organized, badly traumatized people.

The one way we American Jews can help bring peace is to make continued Occupation mean true isolation. Moderation in the pursuit of justice has not worked. What’s absolutely needed is an end to U.S. aid and Diaspora support. Democracies don’t occupy others. Clarity must finally come from the American-Jewish community that it is will no longer contribute to this travesty and ignore Jewish morality to satisfy its cousins.

Here is where Gordis’ open letter makes good points, urging American Jews to finally use their considerable money and influence to pressure the state (though in his view, only on religious and ‘peoplehood’ questions, not ‘security.’) The recent action he notes by Chicago’s federation was a tiny gesture. An El Al boycott he suggests may be more promising.

We need to go as far in this direction as we can. It’s the direction that can eventually bring change, which will never come as long as the Occupation is perceived as effectively accepted by American Jews and the U.S. government. While most American Jews of course have long opposed Occupation, continual Israel cheerleading by unrepresentative leadership organizations from AIPAC to the Rabbinical Assembly and continuing massive donations by wealthy Jews mean this message of serious opposition never really ‘lands’ or matters. It needs to.

Many are embarrassed that the organized American-Jewish community that hasn’t moved decisively against Occupation for 50 years has gotten newly excited over less pressing religious/identity issues around Orthodox domination. This seems a tacit acceptance of Gordis’ amoral argument that the fates of the ‘Others’ can be left to the state’s tender mercies.

We should rather heed Gordis and show we American Jews are, as he puts it, “serious” about the Jewish state, putting our money and strength as a community where our mouths are, but beyond the narrow domain he assigns us, moving Israel toward realization of its mission, our mission, away from its current miserable incarnation as conqueror and oppressor of the kind we defined ourselves against throughout our history.

About the Author
Steve Koppman was co-author of Treasury of American-Jewish Folklore (Rowman & Littlefield). He is a contributor to The Huffington Post and his satire, commentary and journalism have appeared in many publications including the San Francisco Chronicle, The Nation, The Chicago Tribune, The Village Voice, Newsday and others. His short plays have been produced throughout the U.S and he has contributed short fiction to literary and regional magazines and anthologies. He works as an analyst of the telecommunications industry, grew up in New York City and lives in Oakland, California.
Related Topics
Related Posts
Comments 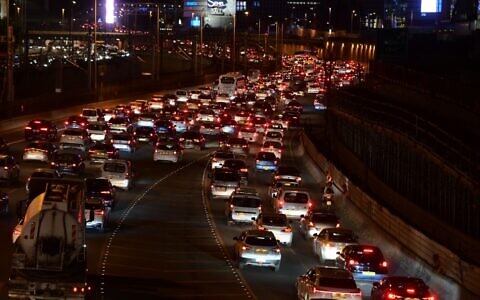