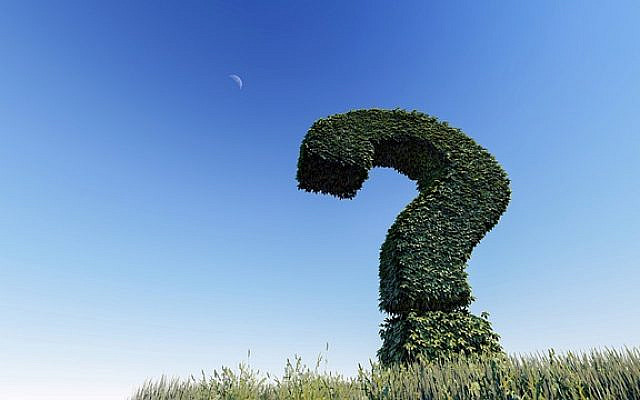 There is Nothing more Irrelevant than an Answer to a Question Nobody Asks –Reinhold Niebuhr 1892-1971, famous Christian theologian

A book is basically an answer to a question. Unless the reader can discover the question the book responds to, his efforts—and those of the author—are for naught. One cannot appreciate an answer unless it is preceded by a question, whether explicit or implicit. The problem of our age is that many claim that they no longer understand books owing to the fact that the books are too difficult or flawed. In fact, they forgot—or never even discovered—the question that the book addresses! Hence, the book is and remains incomprehensible.

This is even more true of the Torah and all rabbinical works. The confusion that befalls much of Biblical academic studies is that the Torah is not seen as responding to the ultimate questions concerning human existence. This misunderstanding is not only a problem within the secular community but also within the religious one.

Within the religious establishment this problem is the result of taking many matters in Judaism for granted: God exists, the Torah is divine, the Oral law also stems from Sinai, Halacha has the upper hand in all matters of morality, etc. These principles, it is argued, are not to be questioned; they are a sine qua non. Consequently, many superb Jewish teachings are lost on the student. He or she will read a biblical or rabbinical text as a text that is nothing more than declarative rather than as an answer to a deep question. In fact, perceiving the texts as answers to deep questions is now considered blasphemy, since such a perception is seen to be an expression of doubt. However, doubt is what gives one an education, since it opens up a world the student has never considered, and consequently, he is not able to understand the profundity of the answer which may remove the doubt.

A student who studies Rashi’s commentary without considering why Rashi makes a particular observation will not be able to understand Rashi’s intent since he has not uncovered the problem or difficulty that plagued Rashi. This is true of all the commentaries.

The primary problem is that the religious have lost the question to which Judaism is the answer! Hence, the religious community is not able to appreciate the answers even as they study the very texts that provide the answers. If one does not realize he is studying an answer, the answer becomes immaterial.

This is not true for those who come from “the outside” and who want to know the deeper meaning of Judaism. They will ask why one should believe in God, what justifications exist to consider the Torah to be divine and whether the Oral Torah is indeed rooted in the Sinaitic revelation or why the Halacha should be seen as superior to any other school of thought or perception of morality. Other such individuals will further ask whether secular philosophers are correct when they are extremely critical of the divinity of the Torah and reject this principle out of hand. These questions are not generally posed by religious people.

For the outsider there is much more at stake. One of the most influential Bible critics is Julius Wellhausen (1844-1918). He launched the “Documentary Hypothesis,” a large work in which he “proved” that the Old Testament was a forgery. Based on his studies, Wellhausen argued that biblical verses were distortions, they were placed incorrectly within certain sections of the text, entire texts were composed throughout the ages by different authors, etc.

Wellhausen’s approach gave birth to a school that continued to take verses apart, “rewrite” them or even remove them altogether. In much of the academic world it became a given “fact” that little was left of the divinity of the Torah.

Now, another, important, example of a commentary that must be studied while considering the underlying currents is the famous Torah commentary of Rabbi Samson Rafael Hirsch (1808-1888, Frankfurt) on all of the Torah. Any study of this commentary is an endeavor of tremendous value. However, those who have studied Wellhausen and other Bible critics realize that Rabbi Hirsch must have been well aware of the theories of Wellhausen and was responding to them throughout his commentary—without ever mentioning Wellhausen or any other Bible critics (see Dayan Isidor Grunfeld’s (1900-1975) lengthy introduction to Rabbi Hirsch’s “Horeb: A Philosophy of Jewish Laws and Observances,” London, Soncino Press, 1962.)

In fact, I would not be surprised to learn that Rabbi Hirsch may well have had Wellhausen’ books before him as he wrote his commentary on the Torah!

Rabbi Hirsch also demonstrated that it was entirely impossible to read the biblical text on its own without an oral Tradition that preceded it. He opined that the text of the Torah, given at Sinai, was a kind of divine “notebook” similar to that a student utilizes when attending lectures. The student makes select notes in his own shorthand so that when he desires to study and review the lecture he only needs these personal notes that give him a clear recollection of the entire lecture.

Should a friend who did not attend the lecture, read these notes—they would make no sense at all! Since he had not originally heard the professor himself, he may even draw incorrect conclusions from the notes. To understand these notes, one must have first attended and understood the lecture!

Thus, Rabbi Hirsch argued that one cannot first read the Written Torah since it includes only the Divine written “shorthand notes” conveyed to Moshe at Sinai after God had previously taught Moshe “all” of the Torah orally (Moshe had attended the lecture!). Thereafter, God gave Moshe the Written Torah in the form of short notes comprising narrative texts and texts of short, general commandments. Herein, argued Rabbi Hirsch, lies the fundamental mistake of Wellhausen and the other Bible critics: they studied the Written Torah and the Oral Law in the incorrect order. They started to read the shorthand notes first­—and were not aware that they were only reading the notes summarizing a full course of lectures that preceded the notes themselves.

Only after reading Wellhausen, does one become aware of the full profundity of Rabbi Hirsch’s commentary on the Torah. Wellhausen had erred in not realizing that he was reading an answer by way of “shorthand notes” that is the Torah text. In fact, he did not even consider the possibility that these were “notes,” nor did he did consider that they were preceded by questions.

Indeed, we would agree with Wellhausen if the text of the Torah was no more than what it appears—a complete text riddled with difficulties (Spinoza made the same mistake!). It is not a full study-text but short notes to be reviewed and studied after one has heard the full lecture at Sinai. This is the major difference between what Judaism calls Torah and the academic world terms “The Bible.”(1)

(1) I have discussed many other dimensions of Bible Critique theories and their history in “On Bible Criticism and its Counterarguments.” See my book: Between Silence and Speech, Jason Aronson, Northvale, New Jersey London, 1995, chapter 10. See also cardozoacademy.org; Lord Rabbi Jonathan Sacks z.l., Crisis and Covenant, Jewish Thoughts after the Holocaust, Manchester University Press. Manchester and New York, 1992, chapters 7, 8, 9; Marc Shapiro, The Limits of Orthodox Theology, The Littman Library, Oxford, 2004, chapter 7.