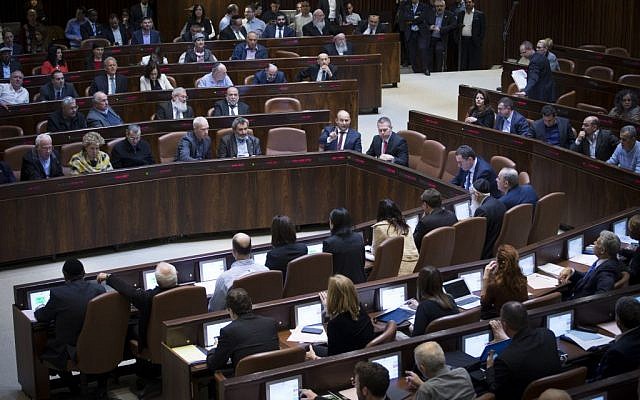 View of the Knesset prior to the Regulation Bill vote on February 06, 2017. (Yonatan Sindel/Flash90)

Israel’s parliament is on an anti-democratic roll. In the past few months, its members have passed a series of controversial bills constraining basic democratic rights or consciously discriminating against its Arab citizens. But none has reached the heights of futility, irrationality or outright stupidity as the 27th amendment to the Entry into Israel Law passed by the Knesset on March 6, 2017. Now those who still care about the country will not only have to deal with its self-induced consequences, but, significantly, find ways to reverse its provisions.

The newly-minted legislation prohibits granting “any person who is not an Israeli citizen or in possession of a permanent residence permit in the State of Israel, a visa or any kind of permit, if he or the organization or body which he represents, knowingly published a public call to boycott the State of Israel as defined in in the Law for the Prevention of Damage to Israel Through Boycott, 2011, or agreed to participate in such a boycott.” Boycotting Israel refers, according to this earlier bill, “to purposefully refraining from economic, cultural or academic ties with a person or any other entity only because of their connection to the State of Israel, any one of its institutions or an area under its control, which may damage Israel economically, culturally or academically”.

This ambiguous act is a bundle of contradictions with untold repercussions. Ostensibly designed to promote the struggle against the Boycott, Divestment and Sanctions movement against Israel (BDS), in fact the law does not confine itself to its promoters, effectively incorporating all those who, in the eyes of its initiators, “wish Israel harm.” From the outset, therefore, its purpose is unclear, since there is no consensus on the identity of Israel’s enemies or, for that matter, what precisely damages its wellbeing.

The wording of the amendment lends itself to targeting a variety of divergent groups. Palestinians living in Israel without permanent residency (a not insignificant cohort) may now be subject to expulsion. So, too, could a large number of ardent supporters of Israel (and key voices against BDS) who oppose the settlement enterprise and shun its products (including many European leaders and functionaries). Ironically, in real terms, many of the victims of this law will be pro-Israel Jews who do not agree with present government policies (they, however, can bypass its provisions — which do not pertain to Israeli citizens — by choosing to come to Israel via the Law of Return). By not differentiating between opponents of Israel’s existence and critics of its policies, Israel runs the risk of alienating almost everyone.

The inconsistencies inherent in the latest amendment to the Entry into Israel Law highlight deeper problems. First: the confusion over the geographic definition of Israel is accentuated as the law specifically distinguishes between Israel and the areas under its control while simultaneously bunching the two together. Both the settlers and the government acknowledge and perpetuate this anomaly. Second: the anti-democratic elements in the original Boycott Law are exacerbated in this iteration. Freedom of speech, of protest and of movement is constrained in the name of protecting Israel, while tools of nonviolent protest are circumscribed. Third, the depiction of patriotism is skewed even further, precisely when what is good for Israelis is subject to intense internal debate. And fourth, inadvertently or not, the law supplies additional fodder to those who claim that the gap between contemporary Israel and apartheid South Africa has never been narrower. Indeed, besides being anti-democratic, anti-Jewish, anti-Zionist and anti-Palestinian, the law is oxymoronic: it uses a boycott to combat boycotts.

Even those who do not agree with aspects of this critique are hard put to explain precisely how the travel ban will be implemented. Are all those who seek entry into Israel going to be interrogated on their positions on the settlements? Will they be asked what they think about BDS? Could they be expected to hold forth on the pros and cons of a two-state versus a one-state solution? And who, exactly, is going to conduct these enquiries: the border police, special interrogators, security personnel or some other agency? Obviously nobody even tried to think through the procedures involved or the pushback they would unleash.

During the week since adoption of the new provisions, it has become more than evident that the poorly conceived amendment has wrought greater harm to Israel than imaginable. Its lack of subtlety and differentiation has supplied a boost to advocates of Israel’s eradication, it has enfeebled vital supporters of the country abroad, it has weakened the faith of large portions of world Jewry and it has validated key components of the critique against Israel. In effect, by its adoption, Israel has actively assisted in delegitimizing itself. Even those who do not see it as outrageous are coming around to viewing it as nothing short of foolhardy.

Can anything be done to contain the damage and correct this folly? Some initiatives are already in place. Leading organizations in Israel and abroad have issued statements underlining the problematics inherent in the law. In the United States, a large number of Jewish bodies (Ameinu, the American Jewish Committee, The Anti-Defamation League and J Street, among others) have come out against the legislation, arguing that it plays into the hands of Israel’s most virulent detractors. Jewish Academics abroad at the forefront of the fight against an academic boycott have openly queried the wisdom of the law and questioned what it means for their future links with the country and its scholars. Their Israeli colleagues have organized a petition in a similar vein. Op-eds decrying the move have filled the pages of leading papers (in Israel’s own press, critical editorials have appeared even in the most conservative outlets).

This outcry, however, will have little effect unless accompanied by action. Some of the bill’s original backers are privately praying (as they did just a few weeks ago in the case of the so-called Arrangement of Settlements Law) that petitions against the law be brought to the High Court of Justice and that it, in turn, will strike it down — thereby saving parliamentarians from themselves. Members of the Knesset, however, have it in their hands to go one step farther: they can admit their mistake and draft legislation to cancel what is obviously a thoroughly misguided if not totally counterproductive amendment.

These measures, even if successful, will hardly undo the cumulative fallout. The ban on travel to Israel for all those who either question its existence or its current policies is merely symptomatic of the widening gap between its current government’s determination to maintain control over the West Bank and the global consensus that advocates the termination of this occupation. In order to deal with the roots of this law, it is necessary to confront the issue at its core. This can be done only if Israel changes course. Israeli citizens can contribute to this cause not only by stepping up the challenge to the settlements and all they entail, but also by changing their leadership (there are signs that early elections might yield a different outcome). Friends of Israel (even if they refrain from buying goods produced in the settlements) can play a role by continuing to press for a negotiated settlement that will guarantee the right to self-determination for the Palestinians and sustain Israel as the homeland of the Jewish people and a fully democratic state for all its citizens.

In the meantime, more people — especially liberal Jews who constitute the majority of Jewish communities abroad — will avoid Israel. Some, hopefully, will decide to come to the country in droves and speak their minds. And Israelis and Palestinians will continue to subsist within the muddled realities forged by overeager and short-sighted lawmakers.