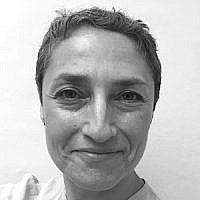 The Blogs
Rachel Lewis
Apply for a Blog
Advertisement
Please note that the posts on The Blogs are contributed by third parties. The opinions, facts and any media content in them are presented solely by the authors, and neither The Times of Israel nor its partners assume any responsibility for them. Please contact us in case of abuse. In case of abuse,
Report this post.

After weeks of silence, Thom Yorke finally comments: “It’s such an extraordinary waste of energy. Energy that could be used in a more positive way.”

He was speaking about an open letter, published under the banner of ‘Artists for Palestine’. In it, a host of celebrities including Desmond Tutu, Ken Loach, Mike Leigh and Roger Waters slammed Radiohead for their decision to play in Tel Aviv this summer. Some might see this as an effective form of action against perceived wrongdoing by Israeli’s. Yorke clearly doesn’t, but is he right? Do cultural boycotts work or is this an invitation to entrenchment and therefore a sad waste of energy?

As a psychologist, I cannot help but identify with Yorke. I have seen it all before. A sense of betrayal leads to anger, then finger pointing, and then despair. Both sides become entrapped in archaic roles: accuser and accused, victim and perpetrator, occupier and occupied. Feelings of futility arise from these fixed positions, each one dependent upon its opposite. Neither victim nor perpetrator would exist without the other. Thus, both are ensnared by the others existence.

Many are affected by this tragic conflict. Those such as Artists for Palestine, may be experiencing a justifiable sense of betrayal that violence and suffering continues worldwide. As radical liberals, the artist community perhaps carries an even greater sense of responsibility. If those who support equality and free expression cannot take a stand, then who?

Few might dispute the worthiness of Artists for Palestine’s intentions. Yet if we want to de-escalate conflict, then we must question all action irrespective of its intent. They suggest, for example, that they are against the politics of division, discrimination and hatred. To this end, they have congratulated Banksy for his decision to cancel Fatboy Slim in Bethlehem. They have told Eddie Izzard that he “cannot hunt with hounds and run with the hare” and have applauded the rejection of his application for the Bethlehem marathon. They have done this because these two artists, who are sympathetic for the Palestinian cause, have played or plan to play to Israeli audiences.

So much for overturning the politics of division, discrimination and hatred and so much for calling out double standards. In fact, Artist’s for Palestine seem unaware of their own contradictions in criticising Israeli censorship, whilst maintaining their own rigid censorial attitudes.

Professor Eran Halperin, who has studied intergroup conflict extensively, offers us an explanation as to how this rigidity holds sway. His 2015 book “Emotions in Conflict” demonstrates how fear plays a pivotal role in the continuation of intolerance and division. Perception of threat, he suggests, is a predictor of political intolerance, political xenophobia and militarism. It leads to cognitive rigidity and suppresses creative ideas aimed at resolving conflict.

Threat, Halperin suggests, can pose a risk to physical safety or to group identity and values. In this conflict, fingers often, arguably, take the place of pointing guns or missiles. To maintain pride, each group’s’ identity becomes collateral damage as shaming and humiliating behaviour occupy a permanent place in the armoury. Halperin contends that such strategies are counterproductive. Humiliation, he indicates, leads to apathy and a disinclination to engage in peaceful process. Shame, he suggests, is equally destructive, leading to avoidance of the very issues that shaming tactics seek to uncover. By the same token, he has demonstrated that when an in-group perceives an out-group as heterogeneous- containing individuals with divergent viewpoints- there is increased hope for an end to conflict.

By advocating this cultural boycott, Artists for Palestine locate blame with all Israelis. Peace activists and independent thinkers are lumped with religious nationalists and right-wing extremists. By failing to see the situation as nuanced, Artists for Palestine reaffirm the polarities of the two sides. They thus instil an atmosphere of hopelessness and reassure all in the belief that it is pointless to imagine and work towards a different future- to take risks in the desire for another reality. This represents a humiliating blow to the progressive groups within Israel, who are trying to engineer change and to convince their compatriots to trust in a two-state solution.

With peace initiatives being discussed for the first time in years, couldn’t the creative community use their energies by engaging with their progressive allies in Israel and Palestine? These allies are under siege from their own extremists and need support. Couldn’t they work together to reengage a generation of disengaged and hopeless young people? If, by contrast, they choose not to devote their talents toward peace, then perhaps they have become entrenched in these familiar roles: Accuser and accused, victim and perpetrator, occupier and occupied: it is a sad irony that these uncompromising, rigid patterns are the very thing that the arts were supposed to destabilise and subvert.

About the Author
Rachel Lewis trained as a marital and family therapist in Montreal, Canada. She then went on to complete her training as a psychologist in London, England. Since then she has been collaborating with OneVoice to provide psychological insights on conflict resolution within the context of Israel/Palestine.
Comments