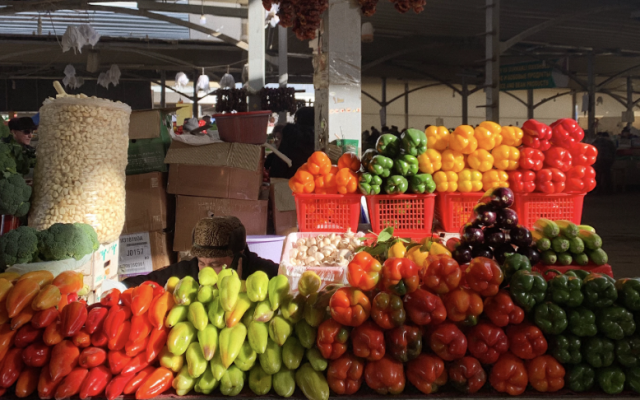 Shapira, a traditionally blue-collar enclave, is one of the neighbourhoods they have ended up in. Hipsters have also begun to move into the area, complete with fixie bikes and yoga lessons. These newcomers have come into conflict with Shapira’s original inhabitants, most of whom are religious Jews from Uzbekistan, Turkey and Greece.

Add lady-boy prostitutes, drug addicts and several hundred Philipino care-workers to the mix and it’s easy to see why Shapira, a neighbourhood that isn’t much more than a square kilometre in size, is a microcosm of so many problems relating to identity,  immigration and crime that countries across the world are facing today.

During the past twelve months, I interviewed people in Shapira to see how they wound up there and what they think of the things happening in the neighbourhood. Here’s what one shopkeeper had to say.

I was born in the Soviet Union, in Uzbekistan. The city I am from is called Samarkand. I’ve been here in Israel for twenty-five years – I made Aliyah in November of 1993, I remember it well. There’s a lot of Bukharim [Jews from Bukhara, Uzbekistan] here in Israel and especially in Shapira. We have family in New York, in Queens, in Brooklyn – some of them even live in Manhattan now.

A big part of my class in high school moved to the US too. Actually, three years ago we all had a meeting here in Israel. People came from everywhere, from America, Austria, Berlin, Moscow – even Uzbekistan. That was great! You couldn’t believe it. A lot of these people, they did really well in business and things like that. But I remember them as kids, you understand?

Why didn’t I move to the USA? I’ll tell you. It’s because at the time, I didn’t have any family there. Like I said, I had friends going there and living there. But all of my family moved here to Israel so I decided to come too. I don’t know if I would prefer to live in the USA. To tell you the truth, I never went there. They say that it’s good there though, a lot of opportunities. But I wouldn’t want to move there now. It would be hard to emigrate, I already did it once. You have to build a new life, get new friends, learn a new language – that’s hard.

I left Uzbekistan for the same reason all of the other Bukharim left. In the 1990s, a little bit before that too, but really after the Soviet Union collapsed, everyone left. It wasn’t bad there, we lived simply but it was a good life. But all of the Jews started to leave the country around that time – probably 99 percent of the Bukharim left the country in 90s.

For some people it was tough. I’m not just talking about Bukharim but Jews that came from the Soviet Union in general. It was okay for me because I was only 19 when I arrived. What do you have when you are 19? Yea, you have to learn the language, do the army, things like that. But when you are that age you didn’t build a life. It was hardest for the people that were 40 or 50. Some pensioners also find it hard, learning the language for instance, but it’s not that big a deal for them – when you’re old you just collect your pension and that’s it. But for people who were middle-aged, a lot of them were very successful in the Soviet Union. Obviously life wasn’t great there but I am saying that they had a high status in society. Here in Israel, you have to start again, you’re nothing. You were an engineer and then suddenly you are cleaning toilets. That’s not easy for people.

I went back there in the Summer after 25 years. That was something…wow! It’s impossible for me to explain the feeling. I went to the high school I studied in, my old house. Everything changed there though. When I left it was old, run down. Today it looks like a European city – it really developed. I was happy to go back but I don’t miss it. It all changed, I miss the place I lived in and that doesn’t exist anymore, you understand? I have no family there and there’s no work either. Even though it developed a lot, every other person you meet has a relative in the US or Russia that’s sending them money.

Like I said, we lived simply. You had a house, a small garden, friends. The problem is that you can’t advance there. Here in Israel, you are able to move up in the world. There’s a lot of opportunities for work and business.

I’ll tell you why there’s so many Bukharim here in Shapira. Like I said, I lived here 25 years already. Every time there’s a big group that make aliyah [immigration] to Israel, the people come here. They work for a bit and do well for themselves. Then, once they’ve got some money, they go somewhere else to live – maybe Holon, Ramat Gan or somewhere like that.

I never lived in Shapira but I have family here. So I came here a lot in the past and I always lived nearby. Then 8 years ago I started working in this shop and I’ve been coming here since then, six days a week, for work. It’s not my shop, it belongs to someone in my family but I agreed to work in it. I used to work in a printing house before, you know with all the papers, the dyes and things like that.

I prefer this work. I get to speak to people every day, I like my customers and I like working with people in general. Everyone here is friendly. Did anything change in those eight years? To tell you the truth, not a lot. The main thing is the house and apartment prices. It became very expensive to rent a place to live here.

True it’s a bad neighbourhood but that doesn’t bother me. Same with all of the illegal immigrants. I’m telling you the truth! What difference does it make to me? I worked here for eight years and, truthfully, nothing bad ever happened to me – either from someone Jewish or one of the Africans. You live here in this neighbourhood, so tell me, did they do something bad to you? No, so what’s the problem? I come here in the morning and sometimes there are drunk Africans or some Africans acting crazy. But there’s also drunk Israelis, there are also Israeli junkies and crazies, right?

It is correct that the Bukharim that lived in Shapira left the neighbourhood because of the Africans. Even now there’s some and they are scared to go outside at night – especially the women and children. Some of my family told me about it, they said ‘we want to raise children’ and they didn’t feel that it was safe here. So they left, a lot of them moved to Holon, Bat Yam and also close by to Kiriyat Shalom.

I’ll tell you though, Shapira was always sort of like that. Waves of people arrive and replace the others that were here before. Before the Africans there were Romanians, Bulgarians – there were even a lot of Chinese. And those people were not Jews by the way, I think I don’t need to tell you that about the Chinese. They just came here to work. Now most of them are gone. It’s like the waves on a beach, people come and go, come and go, come and go.

Will the government do anything to improve the place? I don’t think so. Even if they do, it’s not something they can do instantly. It will take many years. But it’s possible – things can change slowly.