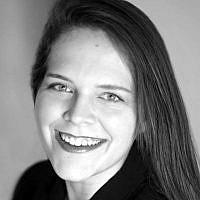 The Blogs
Ilyssa Tuttelman
Apply for a Blog
Please note that the posts on The Blogs are contributed by third parties. The opinions, facts and any media content in them are presented solely by the authors, and neither The Times of Israel nor its partners assume any responsibility for them. Please contact us in case of abuse. In case of abuse,
Report this post.

The influence of an outside actor, such as Egypt, could prevent escalations and the harmful effects of the closing of crossings between Gaza and Israel. Kerem Shalom, the only cargo crossing between Israel and Gaza, could be utilized to alleviate the dire need for medical supplies, fuel, and goods. Israel closed Kerem Shalom as punishment for undesirable Palestinian behavior, however, the Palestinians are only incentivized to continue protesting and creating more violence. Threatening and consequently closing the crossings have had the opposite effect of the intended goal of the Israelis.

Israel curtailed activity at the Sufa border in 2007 as a reaction to fire attacks. In June 2008 three gunmen at the Sufa crossing were caught attempting to plant bombs. Sufa was permanently closed in 2008, followed by the Karni crossing in 2011. At the time, this left Kerem Shalom with the majority of responsibility for crossing in and out of the Gaza Strip. These crossings provide the opportunity for water, food, and health supplies to enter Gaza.

The dismantling of these points deeply upset Gazans and resulted in increased protests. In July 2018 the Israeli Defense Forces concluded that firebombs attached to kites and balloons launched from Gaza were destroying Israeli farmland, resulting in the loss of 7,000 acres. On July 9th Prime Minister Benjamin Netanyahu announced the temporary closing of the crossing as a collective punishment for the destroyed land. The Israeli Defense Ministry issued a statement: “Due to continued attempts to carry out terror by the Hamas terror organization, Defense Minister Avigdor Lieberman has decided, on the advice of the chief of staff, to close the Kerem Shalom crossing to fuel and gas until next Sunday.”

Hamas warned Israel of deadly consequences for closing Kerem Shalom. Hamas then asked the international community to prevent the closing of the crossing the same day as the Israeli announcement. This elicited the response of United Nations Special Coordinator for the Middle East Peace Process, Nikolay Mladenov. The day after the closing Mladenov said: “I am concerned by the consequences of Israel’s decision to temporarily suspend imports and exports with the exception of basic humanitarian supplies through the Kerem Shalom crossing.”

Egypt, which also borders the Gaza Strip, could be a mediator to ensure consistent crossings between Israel and Gaza. Egypt has the Rafah crossing strictly for the movement of people. To avoid violence, Egypt kept Rafah open for the entirety of Ramadan in 2018. The Rafah crossing does not have a perfect system for allowing entrances and exits. In 2016 it was open for only 42 days, and for 36 in 2017. In order to integrate Egypt as a mediator for the Israel-Gaza borders, Egypt would need defined roles in the conflict, such as a treaty or formal declaration.

In the past, Egypt has played a role of co-mediating Israel-Palestinian conflicts ledby President Hosni Mubarak in 2009 Operation Cast Lead and President Mohamed Morsi in 2012 Operation Pillar of Defense. As Egypt faced political overturns during 2014 Operation Protective Edge, it once again was heavily involved in the attempts to resolve the war, and called for a ceasefire.

A closer relationship would benefit Egypt as well. In the 40 years since the signing of the Camp David accords, the Israeli and Egyptian top generals have been working together to address the presence of militant groups in Gaza. Egypt is not a stranger to conflict with Gaza. In January 2018, Lieberman estimated there are many Hamas tunnels crossing into the Sinai. In February, former senior U.S. officials said unmarked Israeli helicopter and warplanes had been carrying out dozens of attacks against terrorist groups in the Sinai desert. These covert attacks were supported by Egyptian President Abdel Fatah al-Sissi.

The geopolitical strategic moves of opening and closing borders play a pivotal role in the lynchpin world of the Israel-Palestine conflict. Ultimately, the Israeli government needs to use a different technique such as utilizing a third-party organizer of the border crossings to achieve its national security goals with Gaza. In the last three wars between Israel and Gaza, Egypt has played a critical role in aiding the mediating process. Closing the crossings to prevent violence with Gaza only increases it. Israel should allow Egypt to continue a role of preventing further cyclical conflict at the border crossings of Israel and Gaza. This could attempt to bring stabilization to the borders of Gaza for both Egypt and Israel.