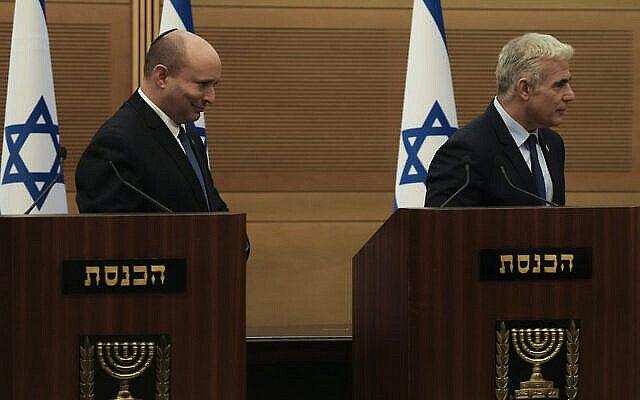 As no calendar year is complete without an Israeli election, the country will apparently soon hold one. The planned November election would mark the fifth such consultation since early 2019.

It’s enough to make Italy look stable, or the United States look reasonable. And it is raising the same question all over the world (even in forums not normally interested in world affairs, like American network news): What on earth is going on?

As someone who was a political reporter when Yitzhak Shamir was in power and whose more recent writings have offended many but not all readers, I offer a sort-of FAQ on fondly anticipated questions:

Why Did The Government Fall?

The government, which will have lasted a year and a half by the time of balloting, actually did not fall. The Knesset is in the process of dissolving itself by a decision of its joint leaders Naftali Bennett and Yair Lapid. They took this unusual step to cut their losses, because coalition rebels from opposite ends (Arabs on one side and nationalist Jews on the other) were starting to make them look pathetic.

That said, while the coalition had lost its majority, Israeli law protects a minority government; deposing it requires a majority vote against. In the current Knesset that basically means the Joint Arab List would need to join the Israeli right in a no-confidence vote.

Israel is no stranger to strange bedfellows, and the Joint Listers have threatened to do this (to punish former ally and current coalition member Mansour Abbas). But this seemed to be a stretch: their voters (as I tried to explain on TV) would be none too happy to see Netanyahu return.

Was It A Good Government?

It marked its main achievement the second it was established: the removal of Netanyahu, which was also just about the only thing all its members all agreed on. For this reason it could not advance anything of substance on the two issues that endanger the future of the country: the mixing with the Palestinians and the relations with the Haredim. Rather it focused on the prosaic, and in passing a budget it achieved something recent Netanyahu governments rather incredibly did not.

Also, of course, there was the civil behavior and rational discourse, the absence of agitation against the courts or the media and of overt corruption, and the infrequency of obvious (or even planned) incompetence in the Cabinet.  For many Israelis these trifles alone, after what came before, were worth the price of admission. But certainly not for all.

Why Does Lapid Become PM?

Under the coalition deal, Lapid was to switch places with Bennett about two years into the coalition’s term. If the government fell in a vote that included two votes against it from one of the two right-wing parties, then Lapid was to take over as head of the “transition government” (which rules from the Knesset dissolution until a new government is formed). Note that multiple elections have been held without governments forming; Netanyahu headed a transition government for a year and a half, and Lapid could be in power for quite a while this way himself.

No one appears to have foreseen the government bringing itself down, and so Bennett might have been able to remain. He is handing over to Lapid in order to preserve the spirit and not the letter of their agreement, and with this gesture he earned from his successor the most improbable compliment in all of Israeli politics: “a mensch.”

What Happens To The Emergency Regulations In The West Bank?

Rarely outside the U.S. Republican Party has obstructionism been more pure than in the Israeli right’s recent Knesset vote against extending the Emergency Regulations in the West Bank. These regulations, a band-aid on the festering wound that is the West Bank misadventure, essentially places the half-million Jewish settlers under Israeli law even though they are not in Israel.

They must be renewed every five years, and few are the actions that align more than this renewal with the policy of the Israeli right. Yet they voted against the extension anyway – and with the help of the Arab MKs and a few coalition rebels they won. Now, because Israel will be in a transition government, all status quo issues remain and the issue goes away.

If Likud voters are serious about their nationalism they might press Netanyahu on why he wanted to leave the settlers without the protection of Israeli law. Do not hold your breath.

Might Netanyahu Pull A Rabbit Out Of The Hat?

This refers to the possibility of setting up an alternative government in the existing Knesset, thus cancelling the planned election. In theory it is possible, as long as Netanyahu gets a majority of 61 to back him as the replacement prime minister. He’d need more than a few rebels though: even if the entire Yamina Party including Bennett himself backed him, he would still need others.

It is hard to see this happening without the Joint Arab List. For them to vote to dissolve the Knesset is odd but oddly possible; for them to re-crown Netanyahu would need some sort of invasion of the body snatchers.

What About The Defendant’s Law?

This law would prevent criminal defendants from leading a government, which seems reasonable considering that they also cannot be cabinet ministers or hold most other public office. It used to not be necessary, the way a law preventing the PM from urinating on the carpet isn’t necessary. Some things simply weren’t done; Yitzhak Rabin in 1977 resigned because of an improper bank account held by his wife.

We now live in less quaint times when things must be crystal clear, and so Lapid wants to pass this law, which was an election promise. Bennett is against it, fearing it would look like what it is: a law aimed at Netanyahu. Bennett is still trying to play fair. In theory the law might pass with the help of the Joint List.

But even if it does, look for Netanyahu to run anyway and hope for a Knesset majority that would abolish it and then appoint him. Give credit where it is due: Netanyahu is no quitter.

What Is Likely To Result?

Polls show Netanyahu surging but still shy of a majority. Some parties may unite or drop off; Bennett himself may retire, for now. But don’t be surprised if the result is the same as what we have today: Likud as the biggest party but Netanyahu shy of a majority, yielding another coalition of contradictions held together for a while by a shared distaste of Bibi.

And then people will speak once more of electoral reform. They will certainly have a point: Israel’s parliamentary system, in requiring a majority not just on election day but one that can hold, is ill-suited to a country as fractured as this one. There are almost no issues that a majority can agree on. And once Netanyahu leaves the scene, there may be none at all.