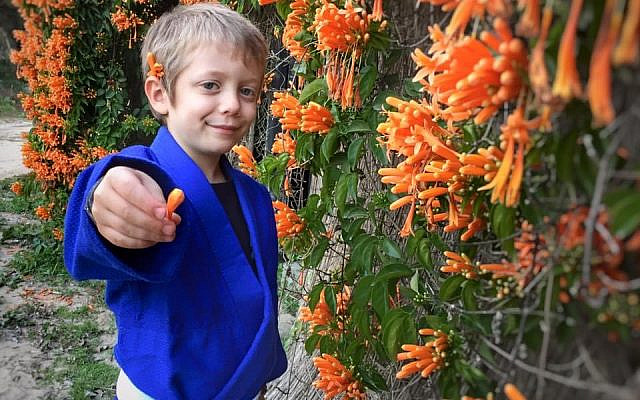 If we lived in LA I would notice the changes in his little body and marvel  – maybe I’d be wistful just a little as I see his growing up marking the years I’ve grown too – for every inch he grows, a new thread of silver in my hair… each day fades into a new dawn.

They say that all Israeli mothers look at their children at some point knowing that we have to give them away – not the same way we would let them go in any normal country, because we are not a normal country…. and our sons and our daughters will put on combat boots one by one, and pick up rifles one by one, and hand over their lives one by one for their unit and a pair of dog tags.

Maybe it’s because we are getting closer to that age when he will have to serve or face a lifetime of being ostracized by a society that suckles on our stories of heroes, or maybe it’s because he told me that he’s afraid he’ll have to kill someone almost as much as he is afraid of pirates or ghosts or being killed himself by a rocket or a gun or a knife in his back.

But I look at my kid – truly a kid – no longer a baby – my kid who pretends to believe in the tooth fairy because he likes the ancient Byzantine coins I leave him, but still sleeps with a stuffed whale, but won’t hold my hand in public unless we are alone and is old enough to read the newspaper, who comes home from school and tells me about the things his friends say about the Arabs and how they all want to kill us, and when I sit him down to tell him this isn’t true, I can see him struggle to believe because fear is big and hungry and has sharp teeth, and I am scared.

I am scared that we are holding on to that last thread of sanity and this whole thing is about to unravel into a seething mass of worms.

I am scared for his soft skin and sweet little face.

I am scared to look those other mothers in the eye, the ones that mewl over open graves, and know truly it could be any of us. God forbid, God save us.

Please. Let this be the last generation where we have to give our sons and daughters like this — because I am terrified that one day he will look at his little boy or girl and feel the same cold sick dread that I am feeling, and that is almost too unbearable for words.