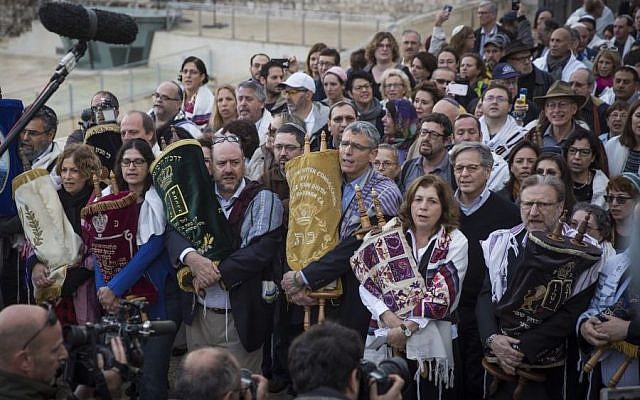 Illustrative: A group of American Conservative and Reform rabbis and the Women of the Wall movement members hold Torah scrolls during a protest march against the government’s failure to deliver a new prayer space, at the Western Wall in Jerusalem Old City, November 2, 2016. (Hadas Parush/Flash90)

These are the words that greeted me this morning from the pages of yesterday’s “Israel Hayom,” billionaire Sheldon Adelson’s free daily. Galit Distal Atbaryan wrote, “If I were to see a dog wearing a prayer shawl and a kippah putting on tefillin at the Western Wall, I wouldn’t consider that Judaism. I would consider it blasphemy. So, too, would most of your fathers and great-grandfathers. But if I saw the Friedman family in Illinois celebrating their dog’s bar mitzvah, I’d think it was a little funny and also a little sad before I moved on to the next video YouTube has to offer.”

Ironically, I discovered the paper moments after ordering a double espresso at a local café, hoping that the caffeine jolt would rouse me after a sleepless night of wailing sirens and smoke caused by a major explosion at a hardware store up the street in Jaffa.

Distal Atbaryan continues, “The fact that the Friedmans think they have the right to do to me, as an Israeli, what I would never dare to do to them is problematic to say the least.”

The translation of her piece — which appears as “No underdog” on the online English site — translates as “US Jewry disguised as underdog” in the Hebrew print edition. It maintains that American Reform Jews are trying to pass as an underdog in the battle to create an egalitarian prayer space at the Western Wall and that this is “an unfair tool, which at its core is violent, vulgar and aggressive, and that is precisely why it is so effective.”

OK, I am thankful to Distal Atbaryan for accomplishing this morning what no coffee could.

I hope that garnering sympathy for American Jews is an effective tool and I agree that none of us should “educate” the other as to how to observe Judaism in the ways that she described.

But, as one human being to another (and with no attempt to invoke Roger Waters), let me say that you, Distal Atbaryan, do need some education: the dog motif does not go over big in American-Jewish circles. I would especially avoid it in a newspaper owned by a billionaire associated with a US president supported by the alt-right.

I am also thankful for Distal Atbaryan’s reassurance that “Israeli Jews do not exclude American Jews from the Western Wall or their hearts.” But I doubt that it goes a long ways to make Rabbi Rick Jacobs and the other Reform leaders who were roughed up at the Kotel warm and fuzzy. I will leave it to my readers and particularly those who are members of Women of the Wall to educate you as to just how excluded they/we feel.

How dare you speak on behalf of all Israeli Jews?

How dare you represent the sum total of Progressive Judaism in a dog’s bar mitzvah?

How dare you imply that American Jewry would threaten to withhold funding for the next Iron Dome in retaliation for imposing ultra-Orthodox observance at the Western Wall?

How dare you do that in a paper saluting the 70th anniversary of Kaf Tet B’November, the 29th of November on which UN Resolution 181 was passed? Perhaps you do need some education as to how instrumental American Jewry, Reform and otherwise, was in creating the state in which you live.

I must admit that on a morning like this one I am tempted to call you the “B” word. But I don’t call other Jews dogs.