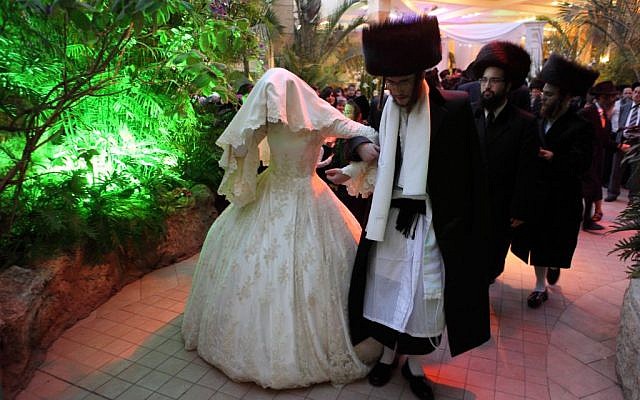 My wife and I attended a wonderful Modern Orthodox wedding recently.

The bride exemplified Hillel’s dictum of kallah na’eh vechasudah — the bride is lovely and charming. The groom was resplendent in top hat and tails (for which I have a soft spot, having been so bedecked at my wedding 47 years ago). The ceremony was meaningful; the food plentiful and delicious; the hall graceful and exquisite; and the speeches and toasts (to the Queen, the presidents of Israel and the United States, and the bride and groom) were thankfully, and surprisingly, short. It was a joyous time, celebrating the marriage of the daughter of dear friends who have made aliyah, and we appreciated being able to spend time with them, though too short as always. And home by 9:30; what could be better?

But there was one small pea under the mattress. As we entered the elegant ballroom, we saw a mechitzah splitting the dance floor in half; no, not made of potted plants, but of dazzling, shimmering, translucent lights. As I expected, the mechitzah didn’t prevent men and women jointly participating in dancing before the glowing couple to the tune of keytzad merakdim, nor the family from dancing together in a later dance set. Yet it stood throughout the meal as a symbol of . . . well, as a symbol of what exactly? Of tzni’ut (modesty)? Of mesorah (tradition)? Of halacha (Jewish law)? Perhaps. Or, perhaps, its message was “that’s what everyone’s doing these days.”

One problem with such mechitzot, and with separate seating at more yeshivish/chasidic affairs, is that they keep morphing into even more severe forms of gender separation. And so, men sitting on one side of a table and women on the other (which was considered “frum” seating when I was young) became separate tables, which became separate tables separated by a mechitzah, which became separate entrances and coat rooms and sometimes even floors. And wedding gender separation spread beyond seating, resulting in some wedding processions devoid of any women except for the bride, her mother, and the groom’s mother, and perhaps grandmothers, and separate male and female wedding albums and videos and the like.

Leaders of other Jewish groups do not, of course, need my permission to institute customs that they believe best serve their communities’ needs. However, the result is that this growing extremism moves the fences for all groups. Thus, Modern Orthodox mainstream positions have become more severe, since the center keeps moving right. For example, having separate male and female dancing circles with no social dancing once was Modern Orthodoxy’s mainstream standard; now, having some type of mechitzah for dancing is equally prevalent.

But even worse than the encroaching gender separation in Modern Orthodox life is the continuing specter of gender exclusion. An advertisement I saw for an evening of Torah, music, and inspiration celebrating Purim highlights this problem. The top of the ad proclaimed that the “NCSY Kollel invites the entire Teaneck community” to the event, which was being held in one of our local shuls. The bottom of the ad made clear, however, how the Kollel defined “entire” (or perhaps “community”): “for men only.”

As is well known, the Orthodox Union of which the NCSY Kollel is a part recently issued its rabbinical panel’s paper on female “clergy,” together with an accompanying OU statement. Although I previously criticized the paper and the statement, I recognize that both contain, to their credit, significant positive elements in addition to the parts I criticized. To take just one example, the statement professed belief in the need to “focus on creating and institutionalizing roles for women that address the needs of Orthodox Jews today, by removing barriers that impede women from further contributing to our community.” Wonderfully stated. But why then not remove the “barrier” of barring women from participating in holiday Torah and inspirational programs?

Gender exclusion affects our kids too. For example, one Modern Orthodox shul invites prominent Torah scholars to speak to, serve as role models for, and inspire younger children. Terrific programs, as evidenced by the videos I’ve watched online. Unfortunately, only half of the shul’s children are welcome at and benefit from them. What message does this impart to young girls? What does barring them from interacting with great Torah personalities and leaders tell them about their ability as adults to fully contribute their individual talents to the community?

Gender exclusion can arise even in the most surprising places. Two Modern Orthodox shuls, one on the Upper West Side and one in Florida, recently hosted Sunday programs for their communities. The Florida program on parenting had a plenary in which a seven-person panel was comprised only of male heads of school. At the other, three men (and no women) spoke about fertility and egg preservation. Parenting and egg preservation and neither shul could find a woman to speak? Either the planners and speakers weren’t thinking, or they simply didn’t care. It’s hard to decide which is worse. Barriers that impede women from further contributing to our community, indeed.

In 2016, the RCA promulgated a resolution that, in part, called upon Jews “to embrace its unifying outlook with passion and pride by recognizing the essential spiritual equality of every Jewish person before God, and seeking, in that light, to maximize his or her religious expression, observance and growth in private and public, and embracing the great human and halachic commonalities between men and women, as well as their respective unique qualities and experiences, and the halachic distinctions between them.”

As always, though, the devil is in the details. So I wonder what the details actually will teach about gender separation and exclusion. I therefore eagerly await the RCA’s and OU’s prompt conversion of their positive words into concrete proposals, and more importantly, action. I hope I won’t be disappointed.