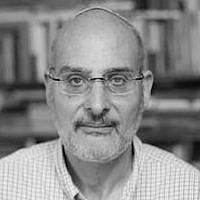 The Blogs
David Schonberg
Apply for a Blog
Advertisement
Please note that the posts on The Blogs are contributed by third parties. The opinions, facts and any media content in them are presented solely by the authors, and neither The Times of Israel nor its partners assume any responsibility for them. Please contact us in case of abuse. In case of abuse,
Report this post. 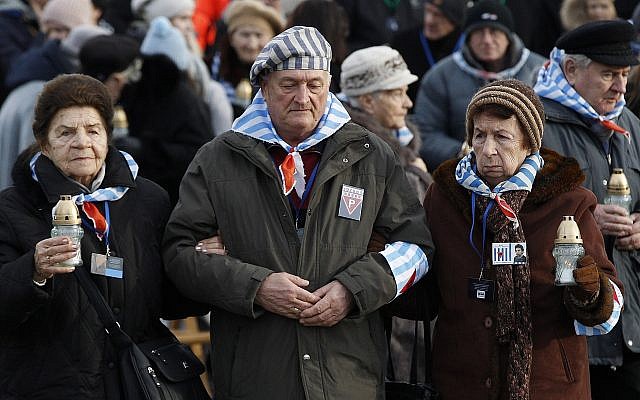 Survivors of Auschwitz, at the International Monument to the Victims of Fascism at Auschwitz II-Birkenau, walk to place candles on International Holocaust Remembrance Day in Poland, January 27, 2019. (Czarek Sokolowski/AP)

I set out here the different and contentious perspectives- that characterise how the present Polish regime wishes to portray the Poland of WW2 in ways contrary to that of Israel, or the Jewish perspective. Because of the sharp clash of these perspectives there is unfortunately bitterness today between Israel and Poland (and between Poles and Jews) that augments the recrimination based in a past, acknowledged only in part. The attempt to reach an understanding need begin with greater clarity in considering the issues. Each need understand the other and not try to divert attention from what is being said.

Poland makes great efforts to remember the Holocaust, but seems very keen on minimizing, if not entirely ignoring, Polish complicity in Nazi crimes… Do you dispute Yad Vashem’s assertion that “at least tens of thousands, if not hundreds of thousands, of Polish Jews perished during the war due to actions of their Polish neighbors”? If so, how would you describe Polish complicity in Nazi crimes?

Firstly, let me quote again the Morawiecki-Netanyahu joint statement: “We acknowledge and condemn every single case of cruelty against Jews perpetrated by Poles during World War II.” What does the Polish government try to hide here?

Secondly, I must strongly protest against the very term “Polish complicity.” It insinuates that Poland was consciously and willingly collaborating with Germany in the extermination of the European Jewry. No, it was not.

Your reply appears to be an odd formulation, a sort-of knee-jerk retort, by one who wishes to evade the truth. It is made up of an apparent non-sequitur – a jump from ‘Polish complicity’ to ‘Poland’, an adjective becomes a noun. This response shows a basic, perhaps deliberate misapprehension as to what was asked. You wish to imply that there are those (the misinformed) who by this term accuse (wrongly) Poland. However, all agree that no culpability can be ascribed to “Poland” that was not a functional state under German occupation. Your response regarding ‘Polish complicity’, as to maligning Poland, parallels the spirit of the recent legislation, and its semantic anxieties that lambasts the term ‘Polish camps’, and prohibits this problematic adjective.

Your reply essentially is a refusal to accept large-scale Polish complicity in acts of harm to Jews. In the first case, the evasion from any hint of culpability is sought by denial and by diverting attention to ‘Poland’; in the second, ‘Polish camps’: merely a geographical designation, this too must be distanced from, at all cost, to assuage this fear of culpability. That no one blames Poland for the making of these camps is ignored.

This dread of the adjective, ‘Polish’, in regard to complicity in Polish Jewry’s demise, is its implication of wide-scale involvement of Polish society of the times and it is this that raised its spectre just days ago in Warsaw when the Polish premier, Mateurz Morawiecki, insisted that Netanyahu clarify himself as to some unguarded comments regarding the complicity of Poles, threatening that if the comment was not clarified, he would not attend the summit meeting of the Visegrad nations- Hungary, Czech Republic, Poland and Slovakia- that was scheduled to take place in Israel. Also the Polish President, Andrzej Duda, said Israel would not be a good site for the summit if Netanyahu’s comment had been accurately reported. And indeed, with Minister Katz’s subsequent remarks (quoting Prime Minister Shamir’s comment: “that Poles imbibed anti-Semitism with their mother’s milk”) the Poles withdrew their involvement and the summit meeting was cancelled. Morawiecki’s recent statement makes plain what Poland’s regime is saying: “I have no problem with someone mentioning the fact that during the cruel, evil, dehumanizing war there were individual criminals in my nation — obviously there were, just as in every other nation”; Trouble is, this is a falsification.

What the Polish regime is battling with semantic stubbornness is the dark shadow of the guilt of the past that stains the land. Here, ‘po-lin’, Jews had their home for generations- but it is now empty of its Jews, their bones scattered beneath the lush countryside; only Singer’s demon remains, wondering, with human evil so manifest, as to his obsolete role. The Jews, by their great absence, still people the Polish spirit- and the animus of vehement denial, deflection and distortion underscores this.

They who lived then -the writings of those who perished as well as the statements of survivors- confirm the findings of modern research, namely, that there was -for varied reasons- large-scale Polish complicity: the vast majority, the norm of the society of the times, in making life impossible for Jews outside of ghettos and camps, that were under stringent German control.

It is essential to study research examining the question of Polish complicity -its nature and scale- which confirms the statements of those who perished and the survivors, yet Polish official responses, even before the misguided legislative efforts to suppress such studies, have been clear. Works, such as that of Professor Jan Grabowski’s Hunt for the Jews: Betrayal and Murder in German-Occupied Poland relating to a rural area of Poland have been the subject of vicious campaigns of vilification; they are accused of “maligning Poland” and the work dismissed.

The distancing from the term “Polish complicity” is to deny that the overriding majority of Poles- the norm- were fully in accord with whatever harm the Nazis were ready to do the Jews and supported these ends. Whatever limited the Jews’ role in Poland, their economic well-being, their existence there- was welcomed and furthered. This attitude coexisted comfortably with Polish antipathy to the Nazi invader. At the same time, there were many Poles who risked their lives to help Jews (and every Jew on Polish soil was in life-threatening danger) but they were a small minority in the overall population, much because of the general antipathy to the Jews, the fear of the Nazis and not least, a fear of their fellow Poles: who would readily report them. Every case of a Jew trying to hide in areas outside ghettos or camps involved having false papers and concealing his identity; this, itself, says much as to the grim reality of life in Poland in those times. It was not the occupying Germans who could easily differentiate between Poles and Jews, but rather Poles, often aware of nuances of language and mannerisms, who readily gave up such people to their inevitable fate.

Scholars estimate that of the Polish Jews who perished in the holocaust, hundreds of thousands were killed due to acts of collusion by Poles. In other words, besides Nazi killing procedures, there was wide-scale Polish complicity, of different kinds, by no means the sporadic, minimal, particularised phenomena that the Polish regime concedes. Moreover, the numbers indirectly are far higher- as a Jew could not expect to remain alive amongst Poles, staying in ghettos and camps with fellow Jews often appeared a safer option.

On the Polish side, complicity is down-played, research stifled, and academics who wish to convey findings that do not accord with their view, are discredited. Scholars, such as Professors Gross and Grabowsky, and others have been accused of maligning Poland; Renowned Israeli scholars, such as Professor Yehuda Bauer, have criticised the distorted statements of the Polish regime and Israel’s main institute of holocaust research, Yad Vashem, has issued a statement (Dr. David Silberklang, Professors Dan Michman and Havi Dreifuss) condemning this denial of broad ‘Polish complicity’ and the overstating of measures taken to assist the Jews, whether by righteous people or by the Polish Government-in-Exile.

Holocaust research need be pursued unimpeded and free of political agendas. Though the exact nature and scale of Polish complicity, support for or involvement in- direct and indirect- furthering harm to Jews and Jewish life in Poland is an ongoing study with complexity and nuance, having varying characteristics as to time and place, the false politically-driven agenda seeking to minimize or scale-down overall Polish support of harm to Jews, denying this to be the norm and conceding only malefactors of lesser number, sporadic cases or the acts of the dregs of society cannot be tolerated, both for its blatant untruth and the apparatus fostering this distortion.

Ambassador Magierowski- Your response follows this outlook. You see the term ‘Polish complicity’ as maligning Poland, and acknowledge only sporadic acts of bad people, who were Poles. You seek to play-down culpability and imply a smaller scale or a lesser involvement in harm on the part of the Polish population as a whole. But the evidence and testimony show otherwise: there was wide-spread complicity -for many reasons- including hostility to Jews, in making life impossible for Jews in Poland. Before the distorters, we must set out Yitzhak Katzenelson’s words:

“They [the Poles] added to our torment and sense of shame by pursuing us with their relentless hatred. They too, insisted on kicking us, like the ass kicking at the corpse of a lion. Time and again we cursed them in the name of our brother Jesus, their God, because they helped our enemies and maligned us. They threw in their lot with our enemies…” (Vittel Diary).

If this past in its complexity is not acknowledged and Polish officials persist in setting out a false-distorted view, then, notwithstanding that Poland today is neither that of Casimir III (the Great) nor a society, in a more recent past, where anti-Semitic currents hold sway, the prospect of close ties with Israel, based upon mutual respect and the furtherance of common interests, will be untenable and under constant strain.

About the Author
David Schonberg has written on topics of Jewish history, including matters relating to the holocaust. His interest in Polish Jewry was sparked by family background: His father (whose entire family perished in the holocaust) lived in Tarnow, Poland, fled (with two brothers) to Lvov, was arrested and sent to a Siberian labour camp and was eventually able to join General Anders' army & later the British army, in WW2.
Related Topics
Related Posts
Comments