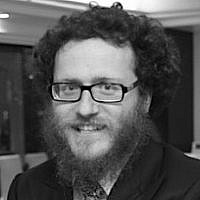 The Blogs
Shmully Hecht
Apply for a Blog
Advertisement
Please note that the posts on The Blogs are contributed by third parties. The opinions, facts and any media content in them are presented solely by the authors, and neither The Times of Israel nor its partners assume any responsibility for them. Please contact us in case of abuse. In case of abuse,
Report this post.

Arthur Sulzberger and The New York Times’ editorial board recently called for Palestinian Authority President Mahmoud Abbas to step down. The Times made this demand not for Abbas’ continued support of terrorism against Israeli civilians, but instead for his attacks on Jewish people around the world — attacks on people like Mr. Sulzberger.

The Times editorial said that these attacks destroyed Abbas’ credibility as a “trustworthy partner” in negotiations between the Palestinians and Israel. Your paper seems to believe that Abbas had any credibility left in the first place — after the Palestinians’ continued incitement and support of terrorism; after continued Palestinian promotion of laws that make  payments to terrorists and their families for murdering Jews; after Palestinian stabbings, car attacks, shootings, bombings, kite arsons, and attempts to breach the southern border of Israel; and after spreading anti-Jewish and anti-Israeli hate through education systems and media outlets throughout the Arab world. Yet somehow, Abbas’ latest “anti-Semitic comment” was the “new low” for you?

Mr. Sulzberger — anyone who is paying attention to the Middle East knows that Abbas has never had any credibility. He has been a lifelong Holocaust denier, who has spent substantial energy fighting Zionists, Israelis, and Jews. Now, in again revealing his true colors, Abbas is going after the Jews of the world, including you. But this is the first time that your editorial board has called for Abbas to step down. Shame on you.

The Oslo Accords were stillborn — dead on arrival. They were built on lies and false premises that your paper helped peddle. Since the founding of Israel, the Arabs have had multiple options to peacefully partition land, but have instead consistently resorted to violence. The 1940s pushback to the partitioning of Palestine; the 1950s Egyptian Suez crisis; the 1960s Syrian and Jordanian-sponsored guerilla attacks against Israeli civilians; the 1973 Egyptian-led Yom Kippur War; the 1980s Lebanese violence; andthe endless and vicious suicide attacks on buses and restaurants in the 1990s all serve as just a few reminders of the extents to which Israel’s neighbors and Arab residents will go to infringe on its sovereignty and murder innocent Jews.

Yet all of this historical context was thrown out the window in 1993, in order to justify a bad deal for both the Israeli and Arab peoples. Your paper praised the now infamous Oslo Accords as the dawn of a new peace. Your family promoted the deal and promised that it would work. It did not.

The New York Times has become terribly comfortable forgetting history in order to write feel-good stories that push its naïve liberal agenda. But maybe we shouldn’t be too surprised at this; the paper also buried stories about the Holocaust as millions of European Jews were slaughtered simply for being Jews.

For decades you, your family and wishful thinking chums have been happy to leave Israel to fight for survival while promoting the formation of Palestine under false premises, overt fabrications, and material lies of omission. Your paper has published endless long and short news and editorial pieces opining about the plight of the Palestinians — often completely ignoring Palestinian terrorism, incitement, and violence — whilst criticizing Israel for being too aggressive. You have suggested that Israel’s actions are largely responsible for the continued tension and conflict in the region. The naiveté of this is striking and has bolstered the current global wave of virulent antisemitism.

This time, Abbas’ attacks hit closer to home Mr. Sulzberger, so you finally speak up. Suddenly, you notice the antisemitism that has forced Jews to fight for themselves — the antisemitism that you and your paper have ignored for decades. And now you are outraged?!Your outrage rings hollow and is naively self-serving.

Mr. Sulzberger — we agree that Abbas should step down. In fact, many of us have been arguing for his removal for years. You and your cohorts have consistently ignored Abbas’ antisemitism and have aided and abetted this criminal. Too many writers in the liberal media have been perfectly happy to throw Israel under the bus, as if Israel is the problem. The real problem is that Israel, for some unknown reason, offends your delicate sensibilities.

About the Author
Rabbi Shmully Hecht is co-founder and Rabbinical Advisor of Shabtai; the Jewish Society at Yale. He can be reached at shmully@279crown.org
Related Topics
Related Posts
Comments