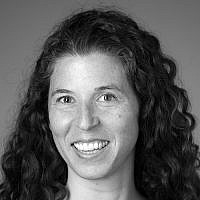 The Blogs
Kim Salzman
Apply for a Blog
Advertisement
Please note that the posts on The Blogs are contributed by third parties. The opinions, facts and any media content in them are presented solely by the authors, and neither The Times of Israel nor its partners assume any responsibility for them. Please contact us in case of abuse. In case of abuse,
Report this post.

Mazal tov on your re-election to serve as Prime Minister of the State of Israel. I am writing this letter to you as a proud yet concerned citizen of the State of Israel. I am an ardent Zionist and made Aliyah from the United States as a single twenty-eight-year-old, after which I enlisted into the Israel Defense Forces. I am now raising my three children – two girls and a boy – in the Galilee, and am teaching them to be proud Zionists and proud of all our country has achieved in its short seventy-five years of independence. While I did not vote for you, I do not deny your many achievements in your fifteen years as Prime Minister of Israel, so please do not discount me as a “hater” from the get-go. That said, I am deeply troubled about the coalition you are forming and would appreciate your honest and sincere attention to my concerns.

The apparent coalition you are forming includes two Haredi parties from which none of their members served in the Israel Defense Forces. I am not anti-religious or anti-Haredi and I recognize the complexity of reversing previously agreed upon exemptions for the Haredi population. That said, I am truly terrified that the path you are leading us down where the Haredi population continues not to serve in the army and continues not to learn the core subjects will spell doom for the future of the State of Israel and the future of my children. Please explain to me why this is not a problem that keeps you awake at night, because it does so for me. Please explain to me how our country can sustain itself when one-third of the population does not contribute to its economy or its defense. Please explain what you will do as my Prime Minister—as you promised to be—to ensure that my secular Zionist children will be able to have a future here in Israel without having to bear the burden of one third or more of the population.

Your emerging coalition also appears to undermine the role of the Ministry of Defense, placing authority over much of what takes place in Judea and Samaria into the hands of Betzalel Smotrich as he will serve in the newly created position of a Minister within the Ministry of Defense. Your coalition will also appoint Itamar Ben Gvir, a provocateur who did not serve in the Israel Defense Forces, as the Minister of National Security. Please explain to me how Betzalel Smotrich, Itamar Ben Gvir and their partners will not set fire to the tinder box in which we already live. In just a few short years from now my son will be enlisting into the IDF. Please explain to me what you and your coalition partners will do to ensure that my son’s life won’t one day be taken in vain, G-d forbid. Please explain to me why my son should have to fight—and perhaps even give his life in defense of his country—when other mothers’ sons do not.

Also of concern is that your government has placed decision-making over educational enrichment programs into the hands of Avi Maoz, an extremist who wants to remove funding for any programs dealing with tolerance, Arab-Jewish relations, homosexuality and more. Please explain to me how the Ministry of Education will be able to provide quality education to Israel’s children—the future of this great country—with an extremist like Avi Maoz at the helm.

What’s more is that your coalition will include Aryeh Deri as a Minister, despite his past conviction of taking bribes while serving as the Minister of Interior, and his more recent admission to tax fraud. Please explain to me how Israeli citizens can trust politicians such as Aryeh Deri to do what is in the country’s best interest when they themselves have knowingly violated the law.  Please explain to me what you will do as Prime Minister to restore the people’s faith in their elected representatives.

I am not asking for these explanations cynically—I genuinely want and need to hear your perspective on these issues, because politicians’ points of views are oftentimes obscured by dirty politics, name-calling and shouting matches.  In your election campaign, you talked about forming a right-wing and stable Zionist government, but I don’t see anything Zionistic in many of the coalition members with whom you have partnered. I don’t see anything Zionistic in members of Knesset not serving in the Israel Defense Forces. There is nothing Zionistic in members of the Knesset prioritizing their time and efforts on ensuring that their constituents lack the most basic tools they need to contribute to Israeli society.

Mr. Netanyahu, you are a great leader with a storied past and have made many contributions to the State of Israel. But today, it is no longer clear to me that your leadership is steering the State of Israel in the right direction towards securing a prosperous Jewish and democratic state where all citizens have equal rights and obligations.

As a concerned mom, I need to hear what you will do to ensure that my children and my children’s children have a bright future in our Jewish homeland.

With sincere wishes for success in your next term as Prime Minister. This country’s future depends on it.

About the Author
Kim Salzman is the Director of Israel and Overseas Operations at the Jewish Federation of Greater Pittsburgh. She is a trained lawyer and practiced law in Israel and New York. She is also the proud mom of Gal, Maayan and Ella.