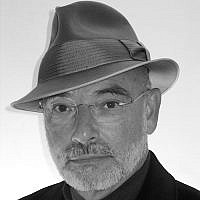 The Blogs
Levi Lauer
Apply for a Blog
Advertisement
Please note that the posts on The Blogs are contributed by third parties. The opinions, facts and any media content in them are presented solely by the authors, and neither The Times of Israel nor its partners assume any responsibility for them. Please contact us in case of abuse. In case of abuse,
Report this post.

It is a mark of your humility and personalism that it seems appropriate to address you, arguably the most admired, living, Jewish hero, so informally. We’ve spoken briefly a few times when our paths crossed on your unassuming walks in your now instantly recognizable, trademark olive-green cap the streets of Yerushalayim’s Old Katamon, and when many years ago, you learned nearly unnoticed in a corner of Machon Pardes’ beit midrash soon after escaping the FSU and the Gulag. No pretensions, no grandstanding — what you see in and hear from Natan Sharansky is what you get. “Fear no evil,” you famously wrote. A close friend in the JAFI leadership speaks of you with awe as you managed to negotiate internecine politics with dignity, decency and much restraint.

So when you’re silent publicly about the government’s insistence on deporting 38,000 more African refugees and asylum seekers — especially after Bibi’s U-turn and rejection of the UN sponsored arrangement – to certain distress, probable suffering and possible death, that silence resonates. Did the teaching at Pardes inadequately convey that the Egypt bound patriarch Jacob and his children were also hungry “job seekers”, a designation now cynically sloganeered by a callous prime minister? Did we give too little regard to the central biblical insistence, “v’ahavta et ha’ger“? Has our so long history of suffering, and the contemporary resurgence of anti-Semitism, inured us to the pain of others?

Perhaps that’s not what’s at issue, as even you, who have fought your entire life to address truth to power, might understandably be fatigued; eager to avoid another battle, already once victimized by Bibi’s Kotel zigzag; looking forward to more privacy and attention to family matters. Surely it isn’t because you buy the government’s disinformation campaign claiming the refugees pose a security threat or threaten to overrun the country. Surely it isn’t because you think it wise now to waste enormous budget lines on re-opening Holot and hunting down asylum seekers on the streets of Tel-Aviv.

You know the fencing of Sinai means only 23 have come the last three years, and none of late. You’re aware many are Christians fleeing Muslim discrimination. You readily perceive the irony of calling them “infiltrators” in light of Zahal having allowed their border crossing and of our long record of collusion with their brutal, Bedouin traffickers. Better than most, you recognize South Tel-Aviv was a social-economic calamity long before they arrived, and will be long after they leave.

Both in Israel and abroad, many devoted Jews join me in asking, why the public silence? Natan, with inspiring modesty and dedication to the well-being of Am Yisrael and Medinat Yisrael, you deservedly wear the mantle of the Israel Prize winning hero. Your few words now, after Yom HaAtzmaut, in the midst of this great refugee crisis, might earn you a world to come of undying regard and life-saving gratitude: “No to deportation. Let us protect the stranger, for we were vulnerable strangers who endured the suffering of oppression, and forced deportations. Yes to work permits and basic health and child care. Yes to becoming a people who remembers ‘in every generation’ that ‘One who saves a single life is as one who saved an entire world.’” A very few words in your understated way will surely resonate in very many homes and hearts — and government offices.

May you, Avital, and all dear to you have a joyous Hag Shavuot, a season of the revelation of freedom from oppression for all Israel and for all who seek refuge from persecution; and a time to adamantly defend that freedom from the purveyors of the politics of hate and fear,

About the Author
Levi Lauer is the Founding Executive Director of ATZUM, an organization that seeks to remedy injustices in Israeli society, and encourage individuals to become social activists and agents of change. The organization was founded on the belief that Israel should serve as an example for the rest of the world in regards to combating and resolving social problems and social justice crises. A pioneer educator and social activist, Levi’s concern for making social justice a priority of Jewish devotion led him to found ATZUM in 2002 to address glaring injustices and bring assistance to Israelis disadvantaged by inadequate access to public and private protection. Levi is a native of Cleveland, Ohio and has lived in Jerusalem since 1976 with his wife, Chaya, two daughters and four grandchildren. He served 11 years in a reserve, combat, artillery unit of the IDF.
Comments