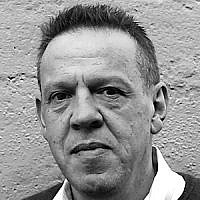 The Blogs
David Cohen
Apply for a Blog
Advertisement
Please note that the posts on The Blogs are contributed by third parties. The opinions, facts and any media content in them are presented solely by the authors, and neither The Times of Israel nor its partners assume any responsibility for them. Please contact us in case of abuse. In case of abuse,
Report this post.

I see you are back in the news again in the wake of a particularly stern open letter (OL) to Radiohead imploring the British band to nix a scheduled show in Tel Aviv this coming week.

A touch optimistically, perhaps, The Guardian in Britain describes this latest OL’s 50 signatories as “leading arts world figures.” It’s probably fairer to say that most of them aren’t exactly household names.

Ken Loach, the film director whose work obtains brisk purchase in Israel even while he implores others not to accept a shekel from the Jewish state, would be one exception.

So, too, possibly, is Thurston Moore. Moore’s reportedly epic noodling was a signature of the mildly famous band Sonic Youth, whom I’ve never actually sat down and listened to, except once when I arrived at a party about 30 minutes into one of Thurston’s guitar solos and thus only managed to catch the last hour of it.

Thurston Moore is not only a fan of the OL but the open song, having famously composed one about the critic Robert Christgau, after the New York reviewer had the temerity to dismiss some of his work.

None of which holds a candle to the Pink Floyd singer Roger Waters, whose impressive album sales over the years may yet be matched by the sheer number of OLs he has crushed out about a variety of subjects for public consumption.

Indeed, any Israeli who hasn’t received an OL from Roger Waters about Israel should probably take a hard look in the mirror and ask why they haven’t made the cut.

Famous or no, what these performers evidently don’t know — although the media that endlessly indulges them really should — is that this notably silly device has totally outlived any journalistic purpose it ever had.

They are pompous. They are generally seen as ridiculous. They contribute nothing to any useful intellectual discussion, other than to signify the writer’s sense of moral outrage and desire to be noticed — neither of which are terribly intellectual positions, when you think about it.

Worst of all, nobody takes them at all seriously.