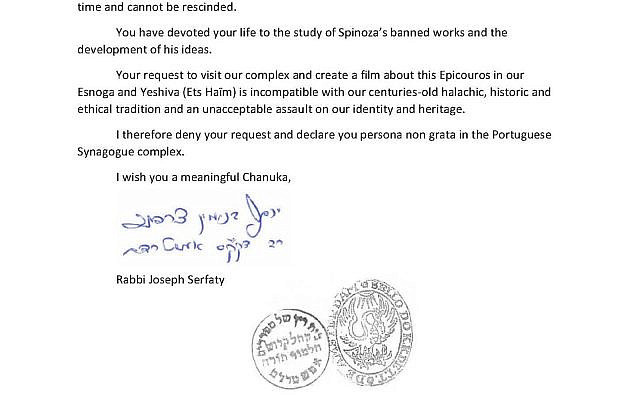 Shalom.
Yesterday I was overwhelmed by the emails I received showing me the letter from the 28th of November that you sent to Professor Yitzchak Melamed in the USA. In this letter you forbid him to enter the complex of our synagogue, also called the “Snoge,” to study documents concerning the ban on Spinoza in his efforts to create a film about this philosopher.

It would seem that you may be ignorant of the fact that the famous former Chief Rabbi of Israel Rabbi Yitzhak HaLevi Herzog z.l. (1888-1959) has already stated that the ban was only in force halachically as long as Spinoza was alive. Furthermore, it would seem you are unaware of the story concerning the ban and the many deliberations concerning the real cause of this ban and the very teachings of Spinoza himself.

As for Prof. Melamed, it may be necessary to inform you that he is a deeply religious Jew who was raised in the ultra-Orthodox Bnei Brak in Israel and studied in Yeshivot.

Your view that the ban on Spinoza’s works is still in force clearly indicates that you are not familiar with his writings, and are thus completely incapable of expressing an opinion about his philosophy.

As an orthodox rabbi who studied in the ultra-Orthodox Gateshead Yeshiva in England for many years and who has read all of Spinoza’s works, I am of the opinion that Spinoza sometimes deliberately misrepresents Judaism. I am also aware that Spinoza wrote remarkably noble observations about human beings, nature and society which have helped all of us.

For all these reasons I strongly object to your terming the Professor as a “persona non grata” – an act that is a tremendous insult and chutzpah.

By banning the professor from the complex of the synagogue, and as such, not even allowing him to join a minyan in our synagogue, you have created an enormous Chillul Hashem, desecration of God’s name, making Orthodox Judaism a farce in the eyes of the many. You have done all of us, who fight for the honor of Judaism, a great disservice.

You have all the right in the world to disagree with Prof. Melamed, yet it behooves you to invite him to discuss his intentions and the contents of the film, and possibly contribute to his endeavor.

I hope the lay leaders of the Portuguese-Spanish Community in Amsterdam will take the necessary steps to undo this great damage. 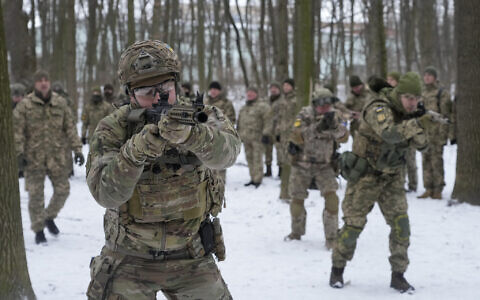