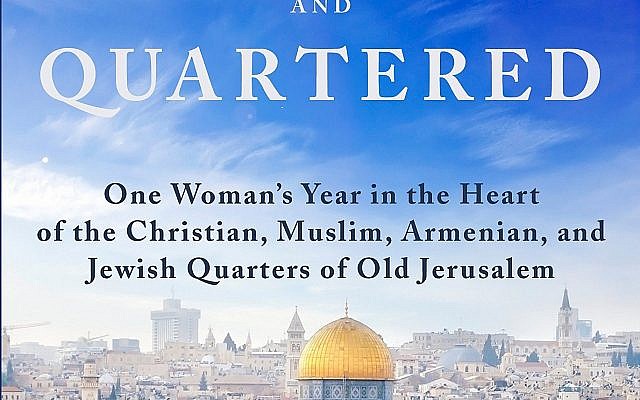 Throughout your book, you used the positive interactions with Arabs throughout your stay in the Old City and recounted your moving personal experiences to arrive at the ultimate conclusion: Israel shares an equal blame with Palestinians for the lack of peace. You did so by exaggerating the searches that IDF soldiers conduct throughout Jerusalem and the Old City, by magnifying Israeli retribution to Palestinian terror, and by conveniently selecting and manipulating which parts of history should be recalled when explaining the status quo of the region.

In the last chapter of your book, you explained how your daughter came back from school one day and explained that a friend had told her that all Arabs want to kill Jews. You proceeded to correctly intervene and explained that this is not true. What startled me is the manner in which you decided to respond to this:

Yes, Sarah, we have bad Jews who want to kill Arabs and the few who have actually committed these crimes are recognized as terrorists by the Israeli government, both right and left. Yet these atrocious acts are not sponsored or encouraged by any prime minister or political party; they are not systemic. Israel did not pay Baruch Goldstein’s family after the horrendous attack in Hebron. It did not name streets after him, and we did not glorify him in any elementary school textbook. No moral equivalency can be drawn.

Of course, you did not shy away from discussing the unfortunate personal narratives of individuals who were displaced during the 1948 war. You described the pain of Mahmoud’s inability to go back to his childhood home in Bakka but gave no background as to why the war began and who was principally responsible for the uprooting of so many Arab inhabitants. You also focused on the great big wall that Israel built following the second Intifada (despite 97% of the border being a fence), but dedicated not one sentence to mention the Palestinian snipers who shot at Israeli civilians daily or the bloodshed caused by suicide attacks on buses in Tel Aviv and Jerusalem.

In one passage, you recalled a conversation with a woman, Leila, in which you discussed the reasons why peace seemed so elusive. Leila apparently expressed that the economic and military imbalance between Israel and the Palestinians served as the main obstacle to productive negotiations. You quoted her saying:

“You are right, you don’t have a peace partner because you’re on the mountain and were in the valley. It is easier for you to stretch your hand down to us.”

Despite being openly critical of your Israeli counterparts in many of your experiences throughout your book, you neglected to respond to this nonsense. For the sake of the audience I will.

Palestinians, on the other hand, are repressed by theocratic and autocratic leaders, suffer from a poor economic decisions, and are used as political tools by Arab countries. But how did this come to be? Did Israel not provide the infrastructure in Gaza during the 2005 Disengagement for a future Palestinian economy? Does Israel force the Palestinian leadership to spend $350 million in terror funding instead of allocating it to social programs and national development?

This letter is not intended just for you, Sarah, but to the growing sectors within our own community who are embracing a naïve humanism as the way towards peace. It won’t bring peace. I served in the IDF and will continue to serve in reserves when needed. Despite this, I see the value of life, I have empathy, and my heart breaks just like yours does. I have lost friends to terror just like you have, and I’ve had incredibly positive encounters with Palestinians. I am a humanist just like you, but political pragmatism should not be lost and the historical context of the conflict must be accounted for.

The status quo exists due to certain historical events. If you disregard those events, no lasting negotiation will succeed.

The author is a former IDF Paratrooper and has an MA in Diplomacy and International Security from IDC Herzliya. He is an Israel advocate, public speaker and Middle East analyst. Campus Coordinator for The Committee for Accuracy in Middle East Reporting in America (CAMERA).