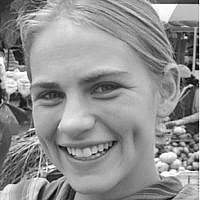 The Blogs
Rebecca Hughes
Apply for a Blog
Advertisement
Please note that the posts on The Blogs are contributed by third parties. The opinions, facts and any media content in them are presented solely by the authors, and neither The Times of Israel nor its partners assume any responsibility for them. Please contact us in case of abuse. In case of abuse,
Report this post.

Lately everyone seems to be talking about rape: the tourist raped in Jaffa’s flea market; the man sentenced to thirty years for forcing a couple to have sex at knifepoint and raping the girl afterwards; the nightclub employee who claimed he had consensual sex with two minors who were so drunk they collapsed; and of course Judge Yeshaya who remarked, “Some girls enjoy rape.”

From my experience as a volunteer at the Jerusalem Rape Crisis Center, rape and sexual assault are typically subjects people prefer not to address. Several times a month I find myself encouraging a classroom of embarrassed teenagers to engage in a conversation about sexual assault, and they aren’t always happy to comply.

Yet, I can normally convince them to participate by sharing the story about how the Center came to be. It involves the rape and tragic suicide of an Israeli university student about thirty years ago. While her assault was traumatic, the way in which the police conducted her interview was even more so. She left a note stating that she could not continue to live in a world where those charged with helping survivors of assault blamed them for it.

Eventually the note made its way into the media, and inspired a group of women to come together and establish Israel’s first rape crisis center. From its outset the Center’s goal has been to ensure that survivors of sexual assault are properly supported and cared for.

Yet, while this story helps students to engage, it can sometimes push the conversation in the wrong direction.

“Did he threaten her with a weapon?”

“How did she kill herself?”

They crave the gory details, and this insatiable hunger to know all is not limited to high schoolers. As a society we’ve grown accustom to the idea that no detail is too small or private to be discussed publicly – we obsessively tweet, post, and comment on everything from the intimate to the mundane. Yet, when it comes to sexual assault, I believe our tendency to focus on the details of individual attacks reflects a strong desire to avoid talking about the issue in a larger context. It is how we resist asking: “How are we responsible for sexual assault, and what should we be doing differently?”

Understanding our own complicity in the attacks on thousands of women, men, and children every year is a heavy undertaking. Nevertheless, the situation demands that we examine it critically.

This past year Israel’s Rape Crisis Centers received over 40,000 calls from people reporting sexual assault. Of those, fewer than 20% filed a complaint with the police, and 75% of the complaints filed were dismissed. Why are so few complaints filed, and why are so few of those filed pursued?

Just last week I sat next to an Israeli man in a cafe who loudly proclaimed that most women who say they’ve been raped simply regret having had sex or want to destroy a man’s reputation. I sincerely hope this man is not a police officer, judge, or anyone else with an ounce of authority, but he might be. In this man’s comments I heard echoes of Judge Yeshaya’s ignorant and ill-informed remark that “some women enjoy rape.” There are reasons why so few survivors report sexual assault, and widespread acceptance of rape myths, even within the justice system, is one of them.

Survivors are aware of the difficulty and insensitivity they will likely encounter if they choose to report the assault. In fact, many are discouraged from taking legal action because of the added trauma of going through the justice system. Yet, despite this Israel remains resistant to requiring judges to undergo training that would inform them about the realities of sexual assault and give them the tools to sensitively address survivors.

I am not advocating that we tilt the justice system in favor of survivors. What I am suggesting is that judges be required to have an understanding of the context in which sexual assault occurs. While there may always be individuals who choose not to report sexual assault, how can we expect anyone to report this crime if judges are ill-equipped to properly understand and deal with it?

For the past month and a half we seem to have been having an open discussion about rape. However, we know the majority of survivors remain silent. The time has long since arrived that they be given a fair opportunity to speak.