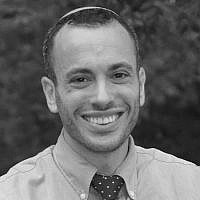 The Blogs
Jordan Soffer
Apply for a Blog
Advertisement
Please note that the posts on The Blogs are contributed by third parties. The opinions, facts and any media content in them are presented solely by the authors, and neither The Times of Israel nor its partners assume any responsibility for them. Please contact us in case of abuse. In case of abuse,
Report this post.

To my Campers’ Parents,

Though it may seem odd for me to be thanking you, permit me to elaborate.

For me, and for so many of my close friends, summer and camp have become synonymous. As the calendar transitions into June, our thoughts fill with images of Macabiah (color war), the Chadar Ochel (cafeteria), and that ineffable reunion with our best friends. We suddenly daydream about our uncoordinated dance moves, and fantasize about screaming until we lose our voice. We recognize that the glory of camp transcends even our most vivid descriptions. We understand that the acres of green land are so much more than a glorified playground; they are a meticulously designed community, an ephemeral opportunity to nurture young Jewish minds and souls.

While it was my friends that brought me to camp all those years ago, it is your children that consistently renew and rejuvenate my experience. Whether it is listening to your nine year old camper discuss her fluctuating relationship with G-d, or watching your middle-schooler volunteer to swim in the shallow water so he can be “buddies” with a special needs camper, the profundity of their being is breathtaking.

For me, however, there is an even added significance. These heartwarming images did not always define my camp experience. As a camper I dreaded camp. There was a period, between 5th and 8th grades, where in the course of four summers I attended four different camps. Though I was a generally gregarious, blithe kid, camp was different. At camp I felt as if who I was simply was not good enough. Suddenly, though I did not gain any weight, I became chubby; though I told the same jokes, I was no longer funny. The me that had always been exciting and popular was suddenly dull and inadequate.

My feeling of inadequacy was not the result of any overt bullying. No one deliberately picked on me, physically abused me, or even verbally attacked me, thank G-d. Most people, in fact, were generally kind. Nonetheless, it was implicitly ingrained that I needed to change. I needed to lose weight, become better at sports, and get my first girl friend already. I felt an unwelcome, amorphous pressure. Either fit in, or get out.

Thankfully bullying is now receiving its due negative attention; yet people continue to view the pervasive image of a brawny bully physically abusing the feeble nerd into lunch money submission as the ultimate paradigm of bullying. While this image may occasionally have a semblance of truth, it was a more subtle, conniving form of bullying that haunted me as a camper. What haunted me, and what unfortunately continues to haunt too many of our campers, was the dissemination of the (often subtle) notion that who you are is insufficient.

My initial negative experiences provoked a feeling of self-futility; my later years inspired and empowered me. I saw, first hand, the awesome power of the camp experience. Camp has unequaled potential to shape our youth’s self-image. When we begin to recognize each and every camper’s infinite aptitude, we inevitably realize our collective potential.

Each and every summer I implore counselors to realize the existential significance of what may occasionally seem like an inane summer job. Camp is more than face-paint and food fights; camp is the suspension of self-consciousness and the embracing of our essence. Camp showed me a place where being myself was the coolest thing I could possibly do. Thank you, parents, for helping me to engage your child in this holy experience. Thank you for trusting me to be a consistent conduit of these positive experiences.

We learn in Pirkei Avot that wealth is measured by satisfaction. Thank you for ensuring that camp remains the richest place in the world.

About the Author
Rabbi Jordan David Soffer is the Head of School at Striar Hebrew Academy. In this role, Rabbi Soffer oversees all educational and administrative activities at Striar Hebrew Academy.He received smicha from Yeshivat Chovevei Torah and a Master’s Degree in education from Yeshiva University, where he is currently and EdD candidate. Rabbi Soffer was awarded the 2020 Pomegranate Prize bestowed by the Covenant Foundation recognizing emerging leaders in the field of Jewish Education and is currently Rabbinic Mentor for the Day School Leadership Training Institute. Rabbi Soffer lives in Sharon with his wife, Dr. Marti Soffer, and their three daughters Maayan, Reiut and Shoshana.
Comments