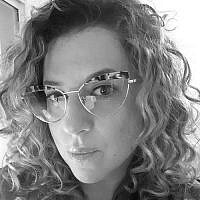 The Blogs
Leigh Hartzman
Apply for a Blog
Please note that the posts on The Blogs are contributed by third parties. The opinions, facts and any media content in them are presented solely by the authors, and neither The Times of Israel nor its partners assume any responsibility for them. Please contact us in case of abuse. In case of abuse,
Report this post.

“I’ll leave you the key. I’m going to the office today.”

“Office? Since when did you stop working from home?” asked Miryam.

“Last month, I got a new job that pays much better.”

“I knew it would work! Every day, I hold the money I earn in my hands, thank Allah and ask him to bless the people I work for with prosperity. And he heard me.”

I thought it was cute that she believed her prayers were responsible for the biggest break in my career.

I smiled and hugged her for the first time in over a year. She just got the Covid vaccine, like many people from the West Bank with permits to work in Israel, so we could finally hug and kiss each other on both cheeks like we used to.

Miryam is a Bedouin Arab. Her parents were born in Petach Tikvah in the 1940s. After the War of Independence, her family went to Jordan. Her parents relocated to Nabi Ilyas. She said they always hoped they would be able to go back home to Petach Tikvah after things settled down, but they never returned.

Miryam started cleaning homes in my town when she was 18. She has six kids, including two sets of twins. She’s divorced and supports them all on her own from the money she earns from cleaning.

She sent her oldest daughter to Hebrew University.

Two other daughters and a son to higher education in Ramallah.

She has three grandchildren.

When I separated from my husband, and there was no one else around, she put her arms around me, wiped my tears and said “Yehiye beseder metuka sheli,” it will be OK, my sweet.

When I’m not feeling well, she makes me soup in between organizing the closet and cleaning the oven.

She held my babies and gushed over them in wonder.

She brings me olives and homemade zaatar.

She tells me to stop working so much and go enjoy life because it goes by so fast.

She tells me to stop taking Acamol, that nana cures all aches and pains.

When I hurt, she hurts.

When I’m happy, she is happy for me.

Miryam is one of the few people who have remained a constant in my life here in Israel.

She’s the closest thing I have to a mother in this country.

Last week, as I drove her to her next house, she told me how she would be hosting all of her kids for Eid al-Fitr.

“I’m all they have here. Like you, I’m also alone. That’s why we need to look out for each other.”

About the Author
Leigh made aliyah from Toronto, Canada in 2001. She bumps and rolls through life as a divorced mom of three boys. When she's not busy trying to clean up the messes she gets herself into, Leigh spends most of her time at Google writing about how to use Waze. She loves chocolate and hates cats.
Related Topics
Related Posts
Comments