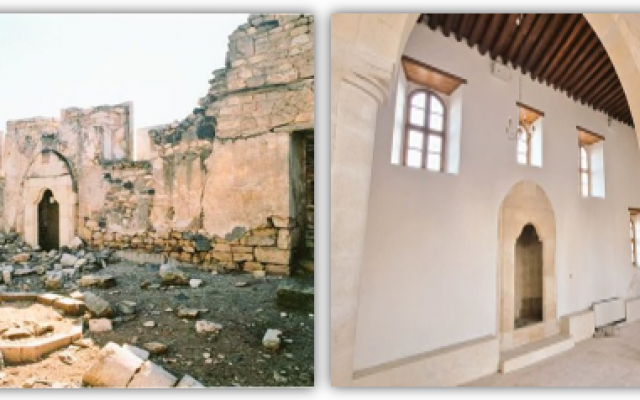 Kilis renovated synagogue: Before and After

“All their neighbors were Jewish” says Büşra Hanım a Kilis housewife, “My mother would go to their houses to light the fires (on Shabbat).”

An unforgettable day in Kilis, a city on the Syrian border while on the #TurkeyJewishRoadtrip.

“Before we go to the synagogue, the Vali (Governor) would like to see you.” said Cuma Ozdemir, who manages the Culture and Tourism offices in Kilis.

Governor Recep Soytürk warmly greeted us into what turned to two hour dialogue on Quran and Biblical prophets, theology and life. 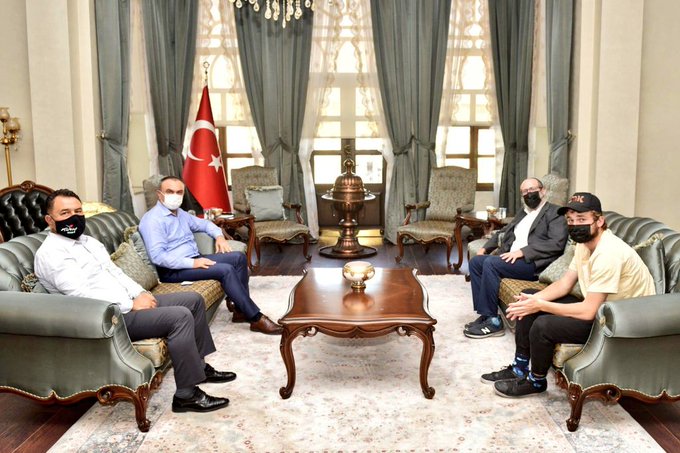 His religious knowledge is fascinating, and the discussion is getting deeper and more intense: reward and punishment, obedience and conscious – it seems that it can go on and on.

Cuma bey is looking at the time, politely suggesting that we should see the synagogue before dark. 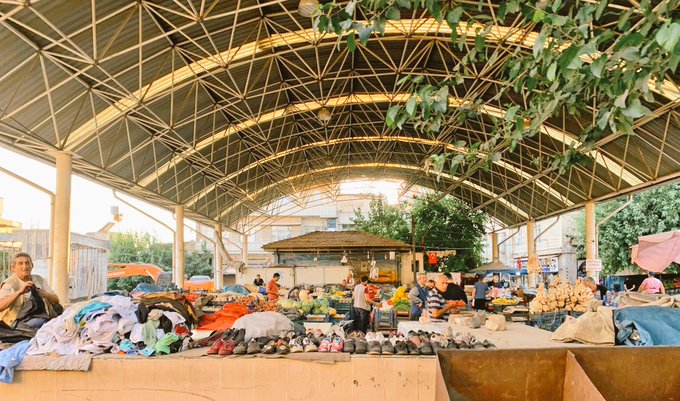 “This was the Jewish neighborhood.” Cuma bey told us, who hosted us so graciously throughout our short visit. “You can see marks on the doors, where they had their symbol.” he added – referring to the Mezuzah scroll affixed on doors – while we were walking through the busy market.

The synagogue, which was abandoned in 1958, when the last Kilis Jews moved to Israel is one of 5 synagogues restored without fanfare by the Turkish government in recent years (I will write in future blogs about our visit to Bergama, and below about Gaziantep).

Look at these pictures: Before and after…

Cuma bey spoke about the history of 300 strong Kilis Jewish community, one of the oldest in the region and the story of this 150 year old synagogue.

“This place was built by the Great Scholar Moshe Di Pinto” reads one inscription, while another indicated that it was built in the name of his bachelor son who died at a young age. Another inscription speaks about the “Good Deeds Society” – “May God reward them” for their efforts!

There are two prayers halls in the Kilis synagogue – they were both professionally restored by comparing to old records and photos. 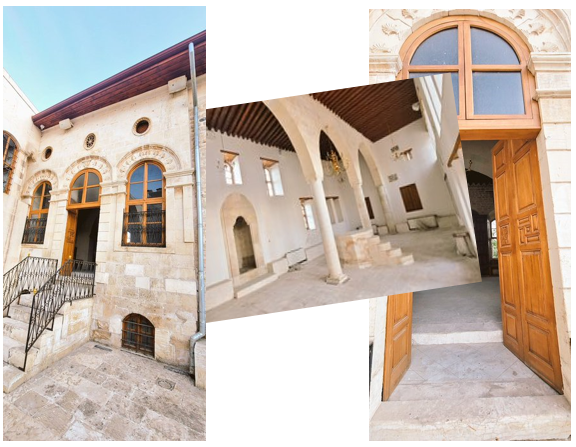 We tried to read the inscription inside the Holy Arc, when we asked for some water to make the words legible. And it revealed that the “marble laid arc” was built in memory of Yakov Shrem, who died just before his marriage. 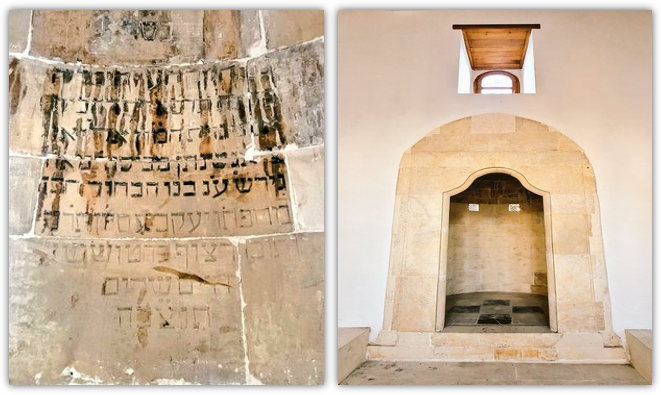 Slowly the neighbors came in one by one, inviting us for coffee, tea and food. 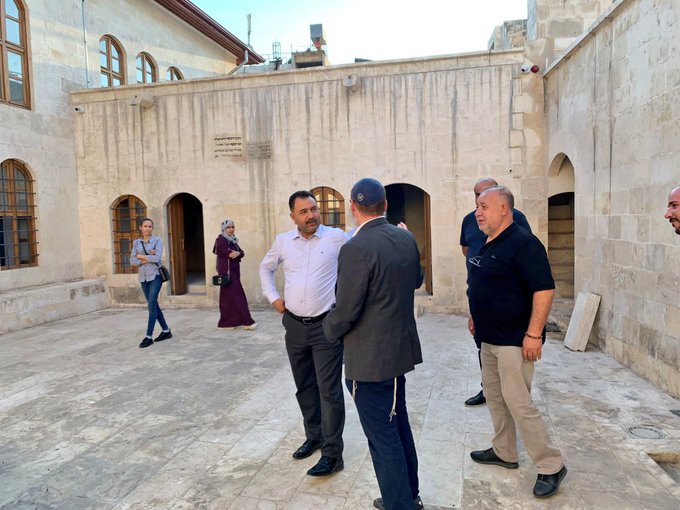 “During Ramadan, the Jewish neighbors would not eat in public.” – it is out of respect to their Muslim neighbors and friends. “There was always a lot of respect between the people. Our parents were sad when their neighbors left.” Mehmet told us, who lives right across the synagogue.

Büşra Hanım, the gracious host told us about home medicines, that were passed on from their Jewish neighbors, for all different types of ailments.

The conversation went on and on. We spoke about old times and old friends. We had bitter, very bitter, coffee; food came out and as they insisted, we were struggling to politely decline for Kosher reasons.

The friendship is real.

“I remember their names” says Büşra “Rahel was her name, Hayum (Hayim?) was his name. My grandfathers neighbors…”

The hospitality and friendship are real. “We host here 200 thousand Syrian refugees, in a city of 100 thousand people. People are people, religion is religion.” Mehmet said.

“Do you know that the Jews had a special pool in the Hamam, where they used to come for religious purposes?” a neighbor shared while mixing the sugar in the tea cup. “It is still there, in the second room on the left.” And we rushed to drink ours too so, we can see the Mikvah. 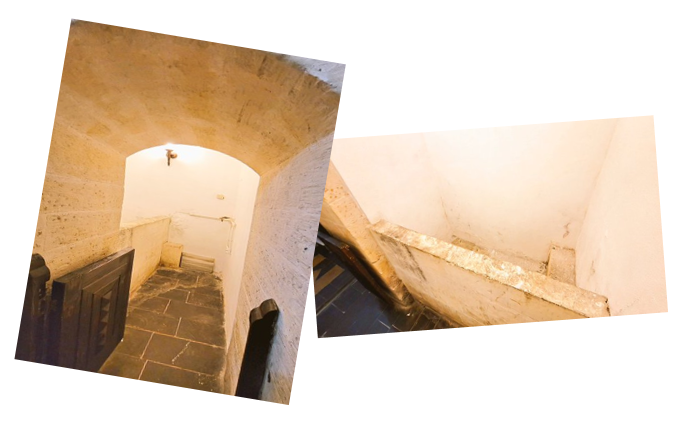 We can’t thank Mehmet and Büşra enough as they packed us with food for the way. Ten minutes walk, and we visited the 500 year old Hamam, where the Mikva still stands in tact.

Walking past this authentic shoemaker shop, I commented to Cuma bey, “Something’s never change.” Like this shoemakers profession, so past friendship we spoke about and demonstrated today here in Kilis. It was truly unforgettable. 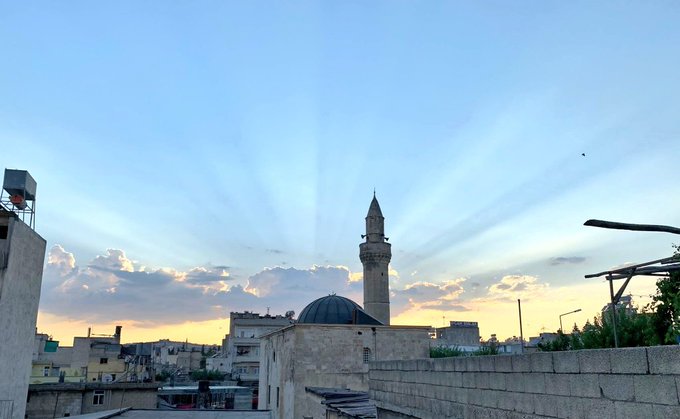 While standing on the roof of the restored Kilis synagogue – looking over the old Jewish quarter, which now hosts their old friends.

This week, Yusuf Eskinazi, who was born and raised in Kilis, and left when he was 15 to Israel. Came to visit Kilis and it’s beautiful synagogue where he had his Bar Mitzva… He was so impressed with the recently renovated Kilis synagogue, that he asked me to post these pictures and add “I will forever be the Kilisli kid.”…

Beautiful reporting of the visit to Kilis by Gazete Kilis :

As a rabbi, I can’t end the story of Kilis without mentioning  that one of the most famous rabbis of Kilis was Rabbi Mordehai Abadie. He wrote the book “Maayan Maim” and was also a prolific Hebrew poet. Some of his hymns are being used at many Sefardic weddings to this day. He died in Beirut, Lebanon in 1884. 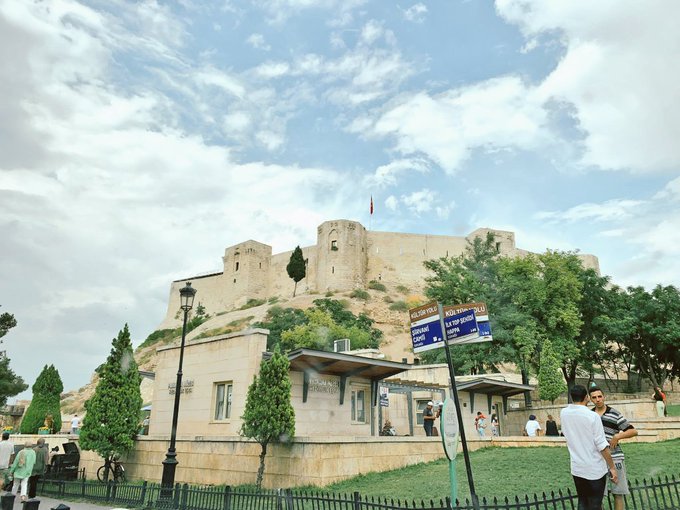 My childhood Doctor in New York was named Dr. Antebi. A famous restaurant in Tel Aviv is called Antebi Meats. Of course, many of these Jewish families, as their name indicates, originate from Antep.

The Jews of Antep prayed right here in this synagogue.

As the synagogue in Bergama and Kilis, this synagogue too was recently restored by the Turkish government, after its roof has collapsed. 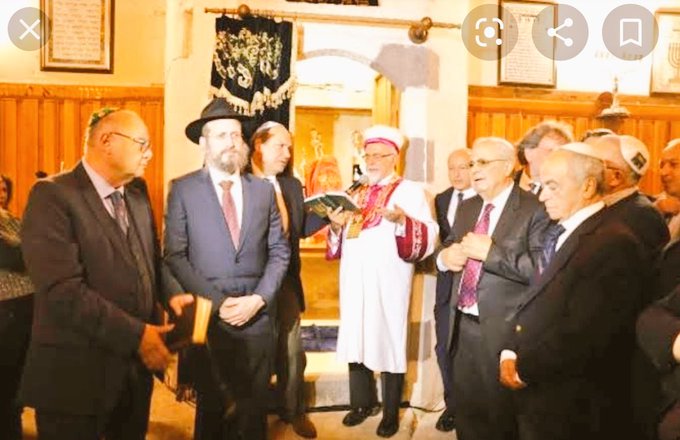 I was lucky to be present here at the inauguration of the Gaziantep Synagogue, headed by Hahambaşı Rav Isak Haleva, and some Antepli Jews from Istanbul, Israel and the USA.

Metropolitan Gregorios Melki ÜREK of Adıyaman, whom I met on day 16 of Turkey Jewish Roadtrip was there, too! 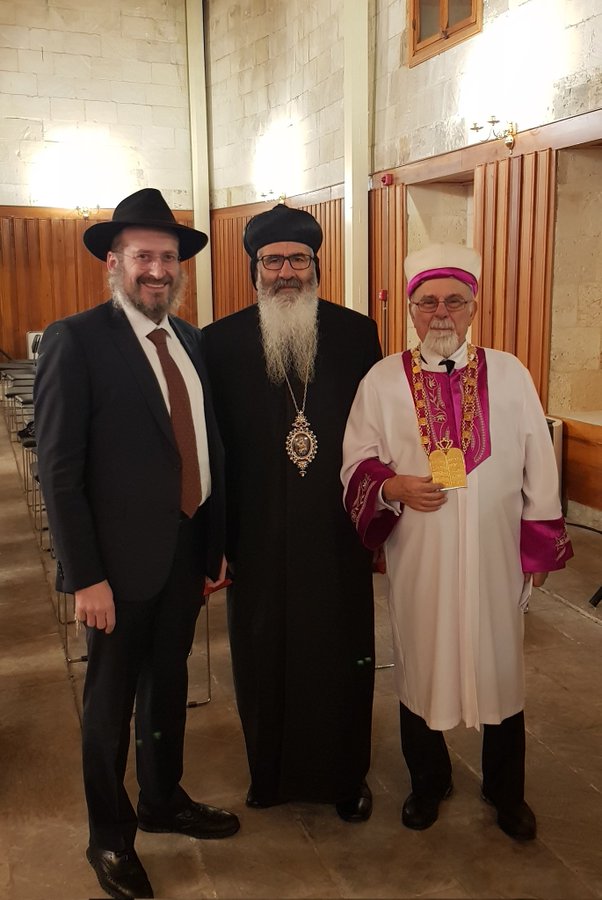 The Jews of Antep were mostly not Sefardi, but rather Mizrahi, or Eastern Jews. Their spiritual center, or place where they would received rabbinical training, would be Halep or Aleppo. Today, it is off course across the border with Syria – but during the Ottoman Empire – nearby.

There are cultural, liturgical and other differences between Sefardi Jews and Mizrahi Jews. The most visible for visitors is the shape of the Torah cover. See in this photo, Chief Rabbi Haleva holds a Mizrahi Torah from Antep – I am right behind with a Sefardi Torah of Istanhul. 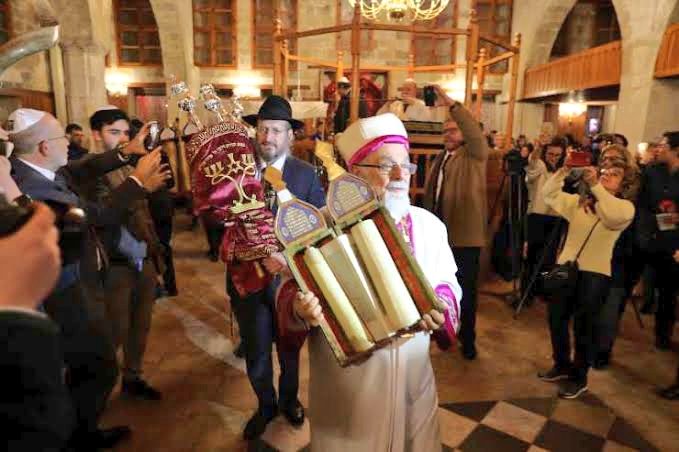 The Torahs are held in a wooden box, and inside a small niche in the wall – similar to the one above in Kilis – and the one we will see tomorrow in Antakya. 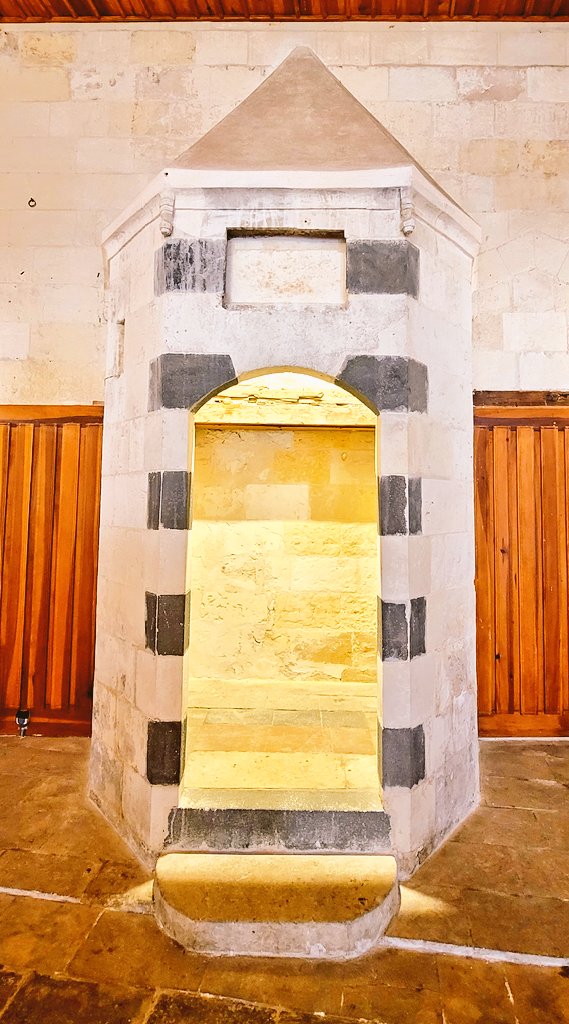 Gaziantep has become famous for the rich collection of Mosaics stored in the beautiful Zeguma museum, a must see for any travelers.

For Jews Antep it is still very much known for the historic Jewish community that lived in the city and carry its name with pride.

I hope that the Gaziantep Büyükşehir will look after this Holy place. We had to go through unnecessary red tape to gain access to the synagogue. Jews are part of the rich cultural heritage of Gaziantep.

Mosaics are not only made of little stones; they are made of people. 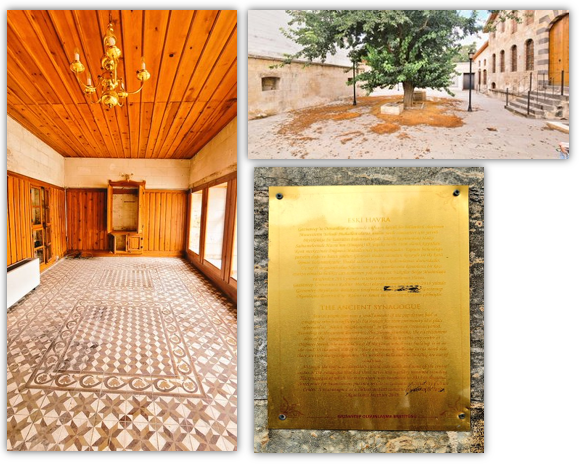 * This post originally appeared as a thread on my Twitter @MChitrik please visit to see other threads and feel free to explore the #TurkeyJewishRoadtrip – on the next blog entry, I will write about other fascinating trips to Jewish sites in Turkey. Stay tuned.