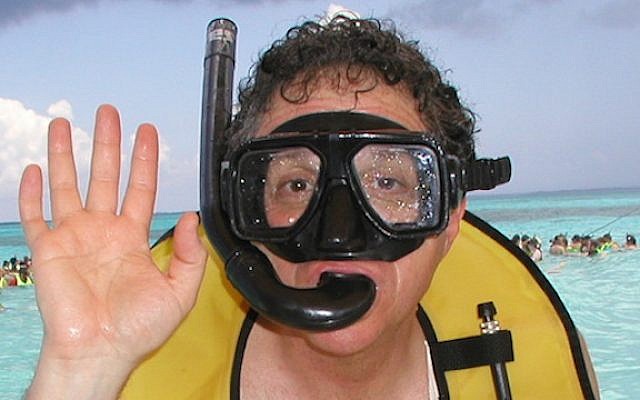 Today I woke up and saw two coconuts staring me in the face. One had a particularly amazing hairdo, with a lock of coconut hair sprawling from its crown. 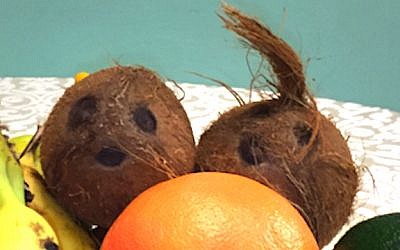 I no longer have the desire to eat these two, though I relish the gentle texture and taste of fresh coconut.  Also coconuts are a breed to fear!  I was once in Koh Phi Phi (pronounced “pee pee”), relaxing with my serious other, when suddenly something smashed to the ground, missing my head by 6 inches.  It was a tropical weapon–the coconut fell from a 30 meter-high tree.  It took me two days to recover from the trauma.  Today we know that this dangerous beast is good for you, as long as you wear a football helmet.   Other memories of coconuts are my Hawaiian adventure four decades ago, with an old girlfriend, whose second house, valued at 3 mil,  was on the Hawaiian coast.  The living room, built OVER the ocean,  boasted a huge white grand piano.  When I played, it was like floating on the water with me a sort of Liberace with snorkel and goggles.

My fantasy?:  that I would live my life out in that beautiful house, and as part of the piano I would install a recording apparatus, which I could turn on with ease, recording every note for posterity.  Thus, I could live out my life creating while being served ’round the clock daiquiris.

Well, in the end, the girl’s grandmother forbade her to see me. Though my piano playing was pretty good, I had memory lapses when asked to play Christmas carols.  But when it was the grandmother who asked me to play, I got even more nervous; I remember that horrible moment: she suddenly demanded me to stop, while showing fierce anger in her chubby red face (she could have been cast as Santa Claus in the local mall).  This nice Jewish boy was a colossal failure and my life as a tropical Liberace was doomed.

When I left Hawaii, my friend, who was slightly embarrassed by my banishment (as well as her grandmother’s hiring of a private detective who secretly filmed us through a motel key hole), bestowed a lei around my neck.  And so I left coconut heaven. I now dream of returning to Hawaii.  My dear cousin Sherry and husband Auwe live on the North Shore of Oahu. They do not have a grand piano, but have many beautiful animals.  Further more, their smiles are endless: unconditional love.

As for coconuts, I once played with a great drummer Lawrence Cook, whose drum setup was bizarre.  When I first saw it, I thought the thing hanging on his rack was a gigantic coconut.  When I got closer, I saw that it was a Nazi war helmet.  I cringed with fear.  How could I play my saxophone, a vehicle for a spiritual expression, while accompanied by the sound of the enemy?  That helmet sound was more terrifying than a Thai coconut falling from 30 meters.  Meanwhile the collective memories housed inside that horrible object were indelibly etched into my psyche! How could I tolerate its creepy presence?  I closed my eyes and played like I was possessed. The audience screamed in delight.

Life is funny.  My first tastes of coconut were the original Almond Joys and their cousins Mars bars (which didn’t have coconut, but whose name was even more mysterious.)  Today Mars is a little less cryptic, as NASA has just published the first recording of wind on the “red planet”. What intrigued me is that it sounded just like the 1000 tubas in Jerusalem I described in my last blog: https://blogs.timesofisrael.com/awakenings/  The Mars sound can be heard here:

I surmise that astronauts choose coconut water as the drink of their choice, as it has the power of a super food, and doesn’t disagree with your digestive system, (something that prune juice might not, hence proving to be an annoyance for an astronaut cooped up in one of those skin-tight suits–an added challenge to high speed space travel).

Flying around in outer space, planets look like painted coconuts, something G-d probably did by design, in his/her desire to keep us respectful and even in awe; planets are certainly impressive, though without gravity they probably do not pose as much danger as a coconut falling from a 30-meter tree.

Yes, life is so interconnected!  As a kid, I loved to open coconuts, especially to drink the milk which usually had pieces of coconut hair floating in it, but which we kids did not consider as gross as finding hairs in our Rice Krispies’ milk.  Even grosser was Mrs. Young, who babysat for my brother and me when I was eight, and who felt that my potty habits were not up to snuff. Because I refused to take the Milk of Magnesia she offered, she snuck it in with my morning Rice Krispies. I ate a bit (yuk), spit it out and never trusted her again–nor almost anyone else for that matter!

Another person I admired also loved coconuts. He even built from them.  Artist Friedensreich Hundertwasser decided to retreat to New Zealand.  He bought some land and designed/built his paradise, one huge piece of livable art.  In one picture we see his palm tree.  He also believed and celebrated nudity, something else that also impressed me. Furthermore he often lived on very little: one month with only one bag of rice.  His paintings are amazing.  I am not sure where he got the coconuts.  Do coconuts grow on New Zealand? (Disclosure: actually “Hundertwasser planted 60,000 diverse trees from throughout the world…he created his vision of a Garden of Eden, the opposite of monoculture”  Hundertwasser, by Harry Rand; Taschen: Koln).

Oh and there’s Bird’s “Ko-Ko”, a frantic marvelous bebop piece featuring Miles Davis (trumpet), Curly Russell (bass), Max Roach (drums) and Dizzy Gillespie (trumpet AND piano instead of Bud Powell who was absent).  https://www.youtube.com/watch?v=4rMiD8UUcd0 . “Bird” of course was Charlie Parker who probably never knew the value of coconuts, as he rarely traveled to southern-most countries.  Charles Mingus, on the other hand, did.  He has an entire album (Tijuana Moods) dedicated to his Mexican adventures….There is of course a relatively new animated film “Coco” which I have not yet seen, but I hear it’s good.

If my childhood memories serve me correctly, the early burlesque ladies used coconut shells to cover their breasts—but we won’t go there now.

After that episode in Koh Phi Phi, I always look up when passing under a coconut.  This could become very uncomfortable and lead to muscle strain.  Furthermore, if you are indeed looking UP and the coconut falls, you could be smashed in the face, perhaps surviving, but needing a face implant.  Now this could be useful if you were a criminal or something, and wanted to change your identity, especially if you were collaborating with the Russian Mafia (we won’t go there either!).

So much for my meditation on coconuts.  I hope I haven’t insulted anyone, especially the coconuts.  To them: Guys, I still love you.  In fact, I want to find ways to help you! You are, in fact, still the kings of the road.  So in the spirit of those feelings, I propose a nationwide campaign to save the coconuts and eat only the palm leaves.  They are less heavy and propose less danger.  They can provide shade (as we well know on Succoth when we live in palm-covered booths).  They also can be worn comfortably.  While in Hawaii, I witnessed a Hula festival, where women learn to dance their traditional dance by mimicking the motions of the nearby palm trees branches.  But I ask one question: How is it that not even ONE of those Hula dancers has ever been killed by a falling coconut?  It must be a sort of Hawaiian “hashkachat prati” (personal divine protection).  And come to think of it, here in the Holy Land, a coconut NEVER came close to smashing my face.

Finally, I must ask this burning question. Is a coconut a nut or fruit?  You would think “nut”, right?  Wrong! A coconut is a FRUIT, or more specifically, the seed of the fruit of the coconut palm. Truth is often stranger than fiction!

About the Author
Stephen Horenstein is a composer, researcher and educator. His repertoire of musical works has been performed and recorded worldwide. He has been a recipient of the Israel Prime Minister's Prize for Composers and the National Endowment of the Arts (USA). His teaching has included Bennington College, Brandeis University, Tel Aviv University, Jerusalem Academy of Music and Dance; residencies at Stanford University, York University, California Institute of the Arts, and others. He is Founder and Director of the Jerusalem Institute of Contemporary Music, established in 1988 to bring the music of our time to a wider audience.
Comments