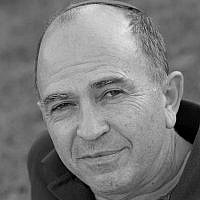 The Blogs
Hanoch Ben Pazi
Apply for a Blog
Please note that the posts on The Blogs are contributed by third parties. The opinions, facts and any media content in them are presented solely by the authors, and neither The Times of Israel nor its partners assume any responsibility for them. Please contact us in case of abuse. In case of abuse,
Report this post.

Never has humanity experienced so palpably and unambiguously a feeling of collective fate. To offer a way to deal with this dilemma, I would like to reflect upon the ideas of the late Rabbi Joseph B. Soloveitchik, one of the most prominent thinkers of modern Orthodoxy in the twentieth century.

The common experience of facing danger and suffering disrupts our faith in life, and evokes questions of meaning and existence. “Existence in the awareness of fate” said Rabbi Soloveitchik, destabilizes human beings, making them feel as if their lives are in the control of external forces, as if life is a mere object, subject to the forces of nature.

Humanity’s battle against the coronavirus has succeeded in crossing borders and surmounting walls. As East to West find themselves in fear of the same invisible enemy, everyone has been exposed to the question of fate and suffering. Nature demands that humankind join hands in the battle against corona and the need to come together is stronger than ever. The awareness of the collective fate that has been forced upon us has the potential to mark a new kind of partnership for humanity as a whole.

‘Contagious diseases’ and ‘great epidemics’ have accompanied humanity from its earliest history and haveimpacted upon all aspects of society — politics, economy, beliefs –and, at times, even determined the size of the world’s population. The corona pandemic is but another episode in humanity’s war against its fate.

The question of human suffering has always played a major role in religious thought and still does. It is the question Moses asks as he pleads to God “pray let me know Your ways,” and by Job as he cries out “Let me know what You charge me with.” It has stirred philosophers and theologians since the days of the great Lisbon earthquake of 1755 to ask how it is possible to comprehend such an enormous natural calamity if not as the result of the sins of humanity?

Voltaire (1694-1778) was one of the strongest critics of the religious justification of natural disasters. In “Candide,” Voltaire’s naïve young protagonist travels through a world which he imagines to be “perfect,” “the best of all possible worlds” while all forms of tragedy and catastrophe befall him. Voltaire heaps scorn upon those who believe that no natural calamity or suffering should be capable of disturbing their belief in God’s righteousness.

Facing a natural calamity such as coronavirus subjects us to the hand of fate, one which has no easy explanation. Humanity, Soloveitchik wrote, experiences fate as “being bound up in the chains of existence, [and] stands perplexed and confused in the face of the great mystery called suffering.” This is a most appropriate description of life during a plague, in the shadow of an invisible virus, when the fear of our death and that of our loved ones becomes real. The words Rabbi Soloveitchik chose to describe the awareness of fate are bitter and painful: “The sufferer wanders lost in the viciousness of the world, with God’s fear spread over him and his anger tensed against it; he is entirely shaken and agitated. His agonies are devoid of any clear meaning and they appear as satanic forces, as outgrowths of the primal chaos that pollutes the creation whose destiny it was to be a reflection of the creator.”

In contrast to this there is another experience, the awareness that a person has a destiny. The experience of ‘existence under the awareness of destiny’ relates to humanity’s active existence: “…when man confronts the environment into which he has been cast with an understanding of his uniqueness and value, freedom and capacity, without compromising his integrity and independence in his struggle with the outside world…Man is born as an object, dies as an object, but it is within his capability to live as a “subject” — as a creator and innovator who impresses his individual imprimatur on his life and breaks out of a life of instinctive automatic behavior into one of creative activity.”

For Rabbi Soloveitchik, the distinction between “fate” and “destiny” is one of the most important ways Jewish tradition deals with the problem of suffering. Our entire doctrine of suffering, he argues, is based upon two dimensions of existence — that of the human being as a child of fate, and that of the human being as a child of destiny, with each person moving between these two experiences. According to Rabbi Soloveitchik, Judaism teaches human beings that their mission in life is to turn fate into destiny, to turn a passive existence into an active one – to move from being an object dictated to by powers greater than he or she, to a subject who determines his or her own path and meaning in the world.

Israel entered into the “covenant of fate” against her will. The covenant of Egypt bound the fate of the nation together in a situation that was forced upon them, a life of slavery, and the feeling of being pursued. Out of the experience of individual suffering, the people of Israel learned that suffering was an experience that was shared by all, and emerged from it to enter into the collective covenant of fate and became a nation. This conferred upon them an identity formed by a collective historical experience and suffering, and of the realization of the need to ‘be as one’ for the sake of the entire community. The readiness to enter into the covenant of fate – the willpower of individuals to take responsibility for the community, to join together in times of distress, out of a sense of obligation and responsibility – is worthy of honor and recognition.

The other covenant, the “covenant of destiny,” is entered into when the shared bond between people is not the product of common suffering, but rather a shared ideal, the desire and readiness to enter into an agreement to lead an ethically elevating and worthwhile life. The “covenant of destiny” is one “that the people has chosen of its own free will…which manifests itself as an active experience full of purposeful movement, ascension, aspirations and fulfillment…the life of destiny is a directed life, the result of conscious direction and free will.”

These days, the “covenant of fate” of the Jewish people about which Rabbi Soloveitchik taught can be understood in broader terms as a “covenant of fate of humanity.” The need to fight fear, chaos, and danger, and the fear of impending suffering and the threat of death – can serve as the basis for a covenant that we must enter into with others in order to save ourselves.

I would like to think that the aspiration taught by Jewish tradition — to transform fate into destiny – can become a message for all humanity. During these days, when humanity must enter into a “covenant of fate” to cooperate to fight the threat of the virus, we can find the power of the spirit to transform this partnership into a “covenant of destiny” for the elevation of all humankind.

An all-inclusive covenant of destiny would seek to jointly create an inspiring and noble foundation for life and survival, one in which humanity’s involvement is not only a response to distress, but part of its ability to become a partner in the greatest project of all — its own creation. That is to say, humanity’s creation.

To put this in biblical terms, a covenant can be created today that represents humankind’s readiness to respond to God’s call: “Let us make a human being”! In the traditional midrash, God is calling to the angels to join in him in the creation of humanity, but contemporary interpretation offers an alternative approach; It as if God says to human beings before they are created: “you and I together will create humanity” — and human beings become God’s partner in their own creation. The next step is for this unique covenant to be transformed into a covenant of destiny, which has the potential to give new meaning to the concept of a partnership of all humanity.

About the Author
Prof. Hanoch Ben Pazi is Chairperson of the Department of Jewish Philosophy at Bar-Ilan University.
Related Topics
Related Posts
Comments