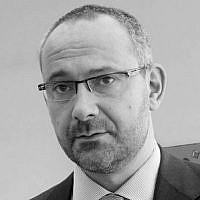 The Blogs
Emanuele Ottolenghi
Apply for a Blog
Advertisement
Please note that the posts on The Blogs are contributed by third parties. The opinions, facts and any media content in them are presented solely by the authors, and neither The Times of Israel nor its partners assume any responsibility for them. Please contact us in case of abuse. In case of abuse,
Report this post.

In a recent public spat with his domestic political opponents, Iran’s president Hassan Rouhani rebuked conservatives for their continued efforts to impose morality by force. Western media have seized upon this latest spat between factions inside Iran’s regime as a sign that in the ongoing battle over personal freedoms, Rouhani is truly a moderate.

‘Locking horns with hardliners’, as a swooning headline in the Guardian proclaimed, is what Rouhani supposedly does. Rouhani and the hardliners are ‘tussling’ over the state’s role in determining a citizen’s path to the afterlife, suggests Golnaz Hesfandiari in The Atlantic. And for the Christian Science Monitor’s Scott Peterson, the hardliners are trying to ‘intimidate’ Rouhani.

But for all Rouhani’s presumed moderation, his hand remains steady with the hangman’s noose. Rouhani quipped that ‘We can’t take people to heaven by force and with a whip.’ Maybe he is just ‘tussling’ about the length of the rope.

In 2013, the Iranian regime executed more people per capita than any other country – as many as 687 people in 2013 – an increase of 165 over the prior year, with most executions happening after Rouhani’s election. According to Navi Pillay, the United Nations’ High Commissioner for Human Rights, Iran has already executed more than 200 individuals in 2014. The increase in pace is so steep that in March, Ahmed Shaheed, the U.N. special rapporteur for human rights in Iran, said in evident frustration, that he was “at a loss to understand how a reformist president should be in office and see such a sharp rise in executions. The government hasn’t given an explanation, which I would like to hear.”

Diplomats are paid to lie on their government’s behalf, no doubt, but even by diplomatic standards, Zarif’s lie was a stretch. Of course Iranians are being routinely executed for political motives.

That is what happened recently to Gholamreza Khosravi, a mild-mannered Iranian recently hanged in the infamous Evin prison. His real crime was to be a sympathizer of the Iranian opposition group, Mujaheddin-e Khalq (MEK). He had been sentenced to six years in prison for donating money to the MEK but, after recent prisoners’ protests inside Evin were brutally quashed, the regime was looking to teach dissidents a lesson. Khosravi refused to confess to crimes he had not committed and was swiftly branded ‘an enemy of God,’ and sent to the gallows.

Khosravi’s crime was his opinion. His was not a trial, but a mockery of judicial proceedings by any standards. His sentence was not a fair punishment, but a cruel and carefully orchestrated act of intimidation designed to terrorize and deter anyone who may harbor misgivings about the Islamic Revolution in their hearts.

With such a grim record, Shaheed’s frustrated plea is understandable. Yet, Iran’s conduct is entirely consistent with Rouhani’s lifelong experience as a regime insider – and the strongest evidence that Rouhani’s moderation is just a façade to consolidate the regime’s grip on the country.

In the 1980s, Rouhani and his current associates were all occupying sensitive security positions in the Iranian power structure. In the summer of 1988, they exploited the end of the Iran-Iraq war to deal a death blow to any form of internal opposition. With the complicity of Iran’s Supreme Leader, the late Ayatollah Khomeini, they emptied the prisons of thousands of undesirables and sent them to their death after one-minute trials before summary executions. The man who diligently carried them out is Mostafa Pour Mohammadi, Rouhani’s current Minister of Justice. He is the man who sits at the helm of what Zarif described to Le Monde as ‘an independent judiciary.’ He may not use the whip to force people to go to heaven, but will have no qualms about hanging them as ‘enemies of God’.

In its public diplomacy as well as in negotiations with Western diplomats, Rouhani’s Iran may appear more affable than his predecessor. But no one should be under any illusion about what his regime is about. The Islamic Republic’s reign of terror will continue, and any diplomatic process will only give Rouhani and his hangmen the kind of cover they need to continue their murderous quest with impunity.

Co-authored with Saeed Ghasseminejad, a Ph.D. Candidate in Finance at City University of New York.