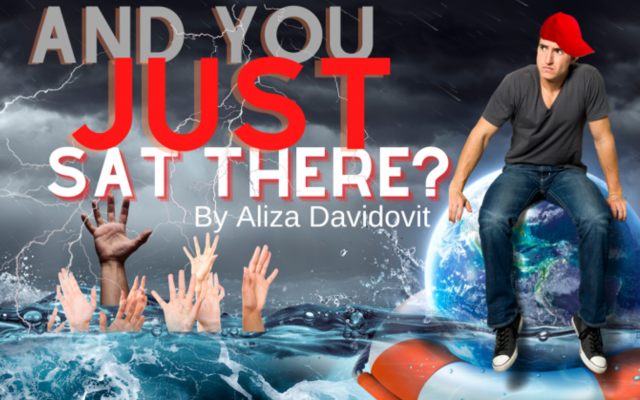 “Please like me,” is an internal need that speaks up early in life. We so desperately want to be accepted and liked. The most common cause of children’s tears is the feeling of being left out. We have all heard the universal cries: “They didn’t let me play with them!” “They didn’t include me!” “They called me names!”

I should know. I had few friends as a child. I wasn’t like other kids. Nor did I try to be. It hurt. I was always anxious. Sometimes lonely. But I didn’t yield. And even then I knew why I didn’t try and meld and join the cliques. It’s the same reason I have today.

Being liked is not free; but being respected is priceless. The price for admission to the club is our individuality. We suppress what is different about us, whether it be our opinions, values, stance or proclivities because we don’t want to stand out, or be laughed at, or be disliked. We become people pleasers and tell people what they want to hear instead of what they should be told. We sit down in acquiescence when there are people and causes for which we should be standing up.

When we are on Facebook or other social media sites, we often find ourselves pandering to the conversations in fear of being ostracized or disenfranchised if we disagree. Regardless of political party or religious affiliation, we go with the norm to avoid the storm.

But our potential, dear friends, as individuals and nations, lies not in sublimating what is unique about us, nor in squelching our voice or our conscience.  Rather, it manifests when we speak and act boldly, come what may.

Of course, expressing ourselves tactfully should always be given first consideration. But when tact is nothing more than a pact with Satan, find your tongue, your voice, your passion, conviction and guts and fight back against evil.  Even if we do not feel powerful enough alone, the little spark we light can burn down a haunted forest.

Did you know that a single domino can topple a domino that is 50 percent larger than itself, and that larger domino functions by the same equation, and so on? The exponential impact is breathtaking. Using this equation “the 18th domino would be as tall as the leaning tower of Pisa. The 23rd domino would tower over the Eiffel Tower, and the 31st domino would loom over Mount Everest by almost 3,000 feet. The 57th domino would practically be as tall as the distance between the earth and the moon!” (From the book The ONE Thing, by Papasan, Jay & Keller, Gary). One small push in the right direction, and change can be seismic. So push.

A herd mentality is a dangerous thing. Be the disruptive voice. Be the clarion call. Make the difference.

In this week’s Torah portion we read about the Tower of Babel wherein God looked down upon those who set to build a tower reaching into the sky.  How did He criticize them? By saying: “Lo! [they are] one people, and they all have one language.” So what was wrong with that?

What was wrong was that they were so single-minded, so much in lockstep, so much of “one language,” that no one questioned the other or challenged the other as to whether their actions were correct or not. Such uniformity in mind and action is a dangerous thing, as it is bound to succeed, no matter how mindless or misdirected. No one kicked down or redirected a middle domino to offset their evil course.

Interestingly, in American jurisprudence, all the jurors must agree on the same verdict for the defendant to be found guilty. Judaism, however has a different view. In the days of the Sanhedrin, the defendant was indeed found guilty if the MAJORITY of the judges found him guilty – BUT if ALL the judges were unanimous in finding a person guilty, the accused was set free. The Torah reasoned that since the members of the judiciary were outstandingly brilliant, at least one judge should have been able to find a reason why the accused was not guilty. Solid consensus revealed that something was wrong with the court. Being of ONE mindset can have murderous implications. Mindless conformity begins with murdering ideas, then kills freedom of speech, and soon enough, blood flows.

No, it is not easy to stand up against the establishment; it is not easy to be that only voice that speaks out against wrong or injustice. I recall how many people scoffed at me when I ripped up my Master’s diploma from Columbia University years ago in protest of its invitation to Iran’s President Ahmadinejad. Throughout, I kept in mind the famous quote, “It doesn’t matter what they call you; it is what you answer that counts!”

And more importantly, it is to WHOM you answer! And for me, that is God alone. It is incredible how it bothers people when you serve God, because it disempowers them. Thus history is replete with leaders and philosophies which have aimed to provoke God and force people away from serving Him.

Indeed the people of Babel were attempting to seize control of the world away from God. So how did He punish them? He confounded them and “confuse[d] their language, so that one will not understand the language of his companion.”

I urge you all to be that voice that rings out in the silent halls of conformity;  the one to make a ruckus when something is not right, whether on a national scale, or speaking up for  an elderly  lady being mistreated by a checkout clerk at the supermarket.

With anti-Semitism hitting an all-time high according to the Anti-Defamation League, it’s obvious that being liked is often an unattainable goal. So like yourself, respect yourself and speak up and speak out to all, not only to like-minded people.

Write to establishments or individuals to call them out for misbehaviors or to thank them for their support. For instance companies such as Balenciaga, Vogue, CAA, Adidas, Gap, Foot Locker, deserve praise and thanks for dropping Kanye West as a client.

Learn from the story of Noah. In a world of complete depravity, he had the courage to be the sole voice of decency, to walk a righteous path. He certainly was not winning any popularity contests as he was clearly not speaking “the language” of the times. Both he and his ark were oddities to laugh at, and then dear friends, it began to rain…!

About the Author
Aliza Davidovit is a journalist and author with a master’s in Journalism from Columbia University; She interviews prominent individuals who have an impact on Jewish life and the State of Israel; She is a contributing editor to numerous venues, appeared regularly on Fox News Live and worked at ABC News and Fox News; She writes a weekly biblical commentary: "The Source Weekly"