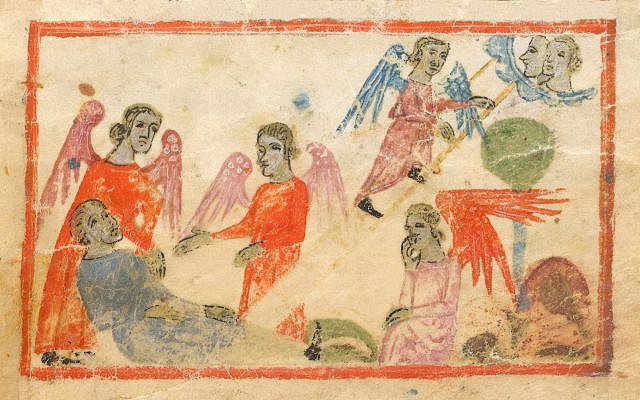 In a rather bizarre comment the Midrash (BR 69,3) seems to compare Jacob’s angels, climbing up and down the ladder, to flies. It draws a parallel with a young prince sleeping on his bed with flies buzzing around him. When his nurse appears the flies go away. Similarly, says the Midrash the angels were ascending and descending the ladder, until God appeared, whereupon they ran away.

The odd comparison of angels with flies is only partially explained by another midrash (BR 68,12) which seems to be drawing on the same tradition. As the angels go up and down the ladder they express astonishment that the man sleeping on the ground looks like the man whose image is engraved on the heavenly throne. They go up to look at the image on the throne then come down to see if it really is the same person. Up and down, up and down, checking and rechecking. The picture is of excitable, undisciplined angels is very different from the biblical portrayal of angels as divine messengers calmly carrying out their mission.

There is an old rabbinic tradition that Jacob’s image is engraved on the heavenly throne. It occurs in the midrash, in the Aramaic targum to the Torah and in the early mystical, hechalot literature. It is probably based on Ezekiel’s vision of heaven, in which he sees the heavenly throne or chariot supported by four creatures. Each one has four faces, that of an eagle, ox, lion and man. The obvious question, at least to an ancient biblical commentator, is the face of which man?

Although there is no extant source which asks this question – it has either been lost or was only transmitted orally and never written down – the answer we would expect is Jacob. Of the three patriarchs Jacob is the one invested with the greatest sanctity: his vision of God on the ladder is more graphic than anything experienced by his grandfather or father, his journey to Laban’s home is framed by angels meeting him as he leaves and returns and of course it is Jacob who fights and overcomes an angel. The sentence at the end of the angel-wrestling narrative, usually translated as ‘for you wrestled with God and with man’, can also, with a bit of rabbinic creativity, be read as ‘you dwelt with God and with man’. This proves, says yet another midrash that Jacob resided both on earth and in heaven, his image engraved on the heavenly throne (BR 78,3). As if confirming this view of Jacob’s sanctity, the three blessings at the beginning of the thrice-daily Amidah prayer correspond to a patriarch; the third, that of sanctity, corresponds to Jacob.

The midrash which seems to compare the angels to flies, explains why the angels are going up and down the ladder; they are flapping around in astonishment at seeing Jacob both in heaven and earth. But we still don’t understand how the midrash can speak of angels in such a disparaging way; flies hardly seems an appropriate metaphor for God’s messengers (the Hebrew word for angel means messenger).

But angels generally do not get a great press in rabbinic thought. They may be invested with sanctity as God’s messengers but they lack the essential qualities of free-will and independence of thought that makes humanity superior to them. They are jealous of humanity, in the apocalyptic Hebrew Book of Enoch they try to discourage God from creating people. Similarly, the corrupt state of the world which necessitated Noah’s flood was the fault of fallen angels, Maimonides dismisses them as only existing in prophetic vision. It appears that the disparaging of angels, the comparison of them with flies, is part of the general Midrashic tendency to not think too highly of them. After all, if they have no independence of thought and only exist in prophetic vison, they are hardly likely to complain.