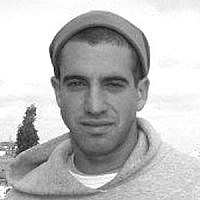 The Blogs
Josh Morrel
Apply for a Blog
Advertisement
Please note that the posts on The Blogs are contributed by third parties. The opinions, facts and any media content in them are presented solely by the authors, and neither The Times of Israel nor its partners assume any responsibility for them. Please contact us in case of abuse. In case of abuse,
Report this post.

As I sit across from her over a plate of chocolate chip cookies and a cup of dark coffee in the newly renovated faculty cafeteria, I think to myself: “I have so much respect for her.” Truth be told, I have so much respect for all of my colleagues because they’ve been doing this so much longer than me and they still get up every morning and pour their heart and soul into their work. I hope that in 30 years’ time, I can still work this hard and have this much energy and passion. As a matter of fact, if I have half the energy and passion as some of my colleague do after 30 years of teaching, I will have considered my career a success.

Mrs. Allen (*name changed) and I have worked together in the World Languages department for nearly four years. We are cordial with one another, always saying our “hellos” and “good mornings” every day around 8:00 A.M. with warm smiles and bright eyes. We both love our job and we have even shared some of the same students over the years. But in a department like World Languages in a school like ours where seven different languages are taught, pleasantries and quiet moments shared over cookies and coffee can be powerful statements and give anyone a reason to be optimistic in an uncertain world.

As I adjust my chair and wipe the remains of my second chocolate chip cookie from my fingers on to a napkin, I ask Mrs. Allen if she likes the coffee.

“Why yes,” she says and takes another sip. “It’s quite good. It’s always good here.”

Mrs. Allen and I have a special relationship. I’m proud of our relationship regardless of how subtle it is or unknown to our colleagues. It’s unique. It’s different. Most of our colleagues are from the United States or Latin America. Some of them came here and left behind war and poverty. A few of them grew up in Europe and lived through communism and even “futbol” riots. But there is not a single pair that could relish in moments like this one. None of them could understand how much Mrs. Allen or I appreciate the calm and normalcy of a simple conversation with a co-worker over Tollhouse cookies and paper cups of drip coffee.

“Did you enjoy The Band’s Visit?” I ask Mrs. Allen. She adjusts her reading glasses and smiles. She loved it. I tell her it’s my favorite movie to show my students. It’s not rare to see us discuss movies or give one another recommendations. Recently, I told her about the film Waltz With Bashir and she suggested I give Ajami a view. And yes, there is a reason we tend to talk about movies involving Israelis and Arabs.

Mrs. Allen is a French teacher from Beirut. She was born in Lebanon and moved to Paris when she was older. Arabic is her mother tongue. I’m a Hebrew teacher. My dad was born and raised outside of Tel-Aviv and is second generation Israeli. Much of my family lives in Israel including my brother. His children will be fourth generation Israeli. She is proud of her heritage and so am I. Mrs. Allen and I enjoy these moments. We try to focus on the positives; the similarities between our respective Semitic cultures. While it might not seem like much to outsiders, it fills me with happiness when we compare Hebrew and Arabic words together. I think there is something to be said that we can swear at one another in Arabic or Hebrew and we’d be the only two in our office to understand. It’s not much but it’s something. And while we genuinely like and care about one another, this is about as deep as our “pleasant” conversations go. But today, it’s different.

“What are you doing this summer?” she asks me.

I think for a second. I guess I don’t have too much planed; however, I’m going to Israel for a couple weeks in June. That will probably be the highlight of my break. I take one last sip of my coffee and adjust my chair. “I’m going to Israel for about two weeks. I’ll visit my brother, grandma, cousins, aunts and uncles. Maybe if I have time some friends too. How about you?”

She smiles again. “Oh how nice, Josh! I won’t be too far from you. I’m going to Beirut to visit my mom.”

For a second I’m confused. I knew she was born in Lebanon but I always assumed Mrs. Allen and her family moved to France long ago. It never occurred to me that she still had family in Lebanon. I take a bite out of my last cookie as the faculty cafeteria continues to fill up with hungry and exhausted teachers looking for respite from the morning’s classes and chaos. “Oh, I thought your family was in France. I didn’t realize you still had family in Lebanon.”

“Oh yes, my mom still lives in Beirut. I left during the civil war but my mom always stayed.” She pauses for a moment and then smiles again. “You will have so much fun seeing your brother! Are you guys close?”

I tell her that we are and how excited I am to see him. But then it hits me. She lived in Lebanon during the civil war. She calls it the civil war but in Israel we call it the First Lebanon War. It’s a different kind of war. We’re not proud of it. Many historians say it’s our “Vietnam.” Like all events in the Middle East, there are a whole slew of view-points and sides, heroes and villains. It’s not clear. But for many people from Lebanon, the Lebanese Civil War was tragic and horrifying. Even for Israelis, the First Lebanon War conjures up demons. I figure she left for France because of the war. I know Mrs. Allen is around my parents’ age so she had to have been in her twenties when she left. I don’t know exactly under what circumstances she left or whether or not Israel had anything to do with her immigrating to France but I still feel a bit uncomfortable. I don’t know why – I wasn’t even born when Israel invaded Lebanon. But I still feel something. Guilt? Responsibility? Again, I’m not sure. I look down at the floor. I look at my shoes and at the clock on the wall to my right. And then back at Mrs. Allen. The words just come out: “you know, I’m sorry. You know, about Israel getting involved in the Lebanese Civil War. I’m sorry you had to leave. I don’t think Israel should have gotten involved.” I pause and then I continue. “I feel like Lebanon has been the battleground for wars fought between other countries. Israel, Syria, Jordan, the Palestinians. I don’t know – it’s not fair for Lebanon.”

Mrs. Allen is as sweet as she always is. She says that it’s not my fault and that many countries and other organizations were responsible for the destruction in Lebanon. She says you can’t blame one country. I think in most cases, especially when it comes to the Middle East, that’s true. But I can’t help but feel for her. She still has family in Lebanon, a country in one of the most unstable regions in the world. I can only imagine how much she worries for her mother and other relatives. How does she feel when she sees a news report about a bombing or terrorist attack? Does she call her mother? Does she check to see the names of those killed? I think for a second that I’m lucky I don’t need to worry about that. Then I realize – Mrs. Allen and I have something else in common.

As of last April, since my brother moved to Israel five years ago, two wars have happened. Countless rockets have made it from the Gaza Strip to the Tel-Aviv area where my brother lives and there have been four terrorist attacks resulting in murdered civilians. I have cousins who served in the Israeli Defense Forces during wars and aunts and uncles who had to worry about them. I have a grandmother who lived through multiple wars and two intifadas. When I hear a news report about a bombing or a terrorist attack I don’t feel anger anymore. I worry. I email my brother. I check to see if there were any casualties.

I’m tired of war. When does it end? Is there a way for us to know it’s almost over? Mrs. Allen and I get up to throw away our empty paper cups and plates. For a moment I feel tension as we are both briefly faced with the reality that our respective backgrounds don’t have the most pleasant of histories with one another. But just as quickly as it rises, the tension eases back down as Mrs. Allen takes out her phone to show me pictures of her granddaughter. “She just turned one last week,” she tells me with pride. Her granddaughter is beautiful. We exit the cafeteria and begin the trek back to our office upstairs and to our students. She has a skip in her step. Mrs. Allen is clearly more excited than I am to get back to the kids.

I think to myself: “I have so much respect for her.” Truth be told, I have so much respect for all of my colleagues because they’ve been doing this so much longer than me and they still get up every morning and pour their heart and soul into their work. I hope that in 30 years’ time, I can still work this hard and have this much energy and passion. As a matter of fact, if I have half the energy and passion as some of my colleague do after 30 years of teaching, I will have considered my career a success.

“By the way,” I ask as we reach the staircase that will bring us back to the World Language Department. “What’s your mom’s name?”

She turns to me. “Malaki. It’s Arabic for angel.” I smile. That’s one more word Hebrew and Arabic have in common.

About the Author
Josh Morrel is a high school teacher in Chicago, Illinois, USA as well as a mentor for high school students through the JUF's Write On For Israel program.
Comments