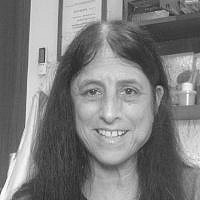 The Blogs
Nancy Parish-Plass
Apply for a Blog
Please note that the posts on The Blogs are contributed by third parties. The opinions, facts and any media content in them are presented solely by the authors, and neither The Times of Israel nor its partners assume any responsibility for them. Please contact us in case of abuse. In case of abuse,
Report this post.

Recently, there was a vote in the Knesset to institute a law that would demand harsher punishment towards animal abusers. What is wrong with our political system that even a vote giving harsher punishment for animal abuse falls according to party lines? (And the proposed law was voted down because of the current coalition reality.) How in the world would this be an issue based on political ideology? Do only people in the middle/left care about animal abuse, and those on the political right don’t’ see why animal abuse is a problem?  I don’t believe that is true.

So…what IS the problem with animal abuse? Maybe it’s not really an issue. So a few cats are burned in the Lag B’Omer bonfires. Boys will be boys, right? Maybe it’s better that people with rage inside get their heebie-jeebies out on animals rather than on people. Then they can calm down and act rationally later on. We all need to get out our aggression, otherwise we blow up, right? That’s why games like soccer and football, even checkers and the card game War are so important. Right?

Yes… and NO! What’s the difference between the two? The difference is that games have rules, the competition – and yes, aggression – is in our heads and no one actually gets hurt. Physical violence is against the rules. Aggression is directed into a positive direction and fun is had by all. At the end of the game, the only thing that might be hurt is pride and ego. In animal abuse, the animal is physically hurt, even killed. His (certainly not “it’s”, for an animal is not an inanimate object) psychological health is hurt, leading to lifetime of fear which may then lead to aggression due to a permanent stance of self-defense, then considered to be dangerous, and maybe even “put down” because of dangerous behavior towards humans.

Certainly, those of us who love animals, who understand the contribution of the human-animal bond to our emotional welfare, who have the ability to be empathetic towards someone who suffers, feels pain and fear – we understand at the bottom of our hearts and in our very being that animal abuse is a crime, no less so than abuse of children. Animals are no less defenseless than children, and are at the mercy of humans just as children are at the mercy of adults.

Of course, not everyone feels a special connection with animals. That’s okay. Sometimes it’s an experiential thing, or a cultural issue. Sometimes it’s even a religious issue. (But even there, Judaism forbids animal abuse.)

But what these lawmakers (and others) have to take into account, even if they are not animal-lovers, is the psychology of animal abuse. Research has shown that there is a link (officially known as the LINK©) between child abuse, domestic abuse (wife-battering), and animal abuse. This link works in a number of ways.

1) Animal abuse is often a sign that the abuser was a victim of child abuse or was a witness to abuse of another (e.g. a sibling, a parent). As an animal-assisted psychotherapist, I have worked with a number of animal-abusing children, and this was certainly the case. It is interesting that these children were actually animal-lovers, but they couldn’t help themselves. This was their way of processing that which happened to them. Some were identifying with the aggressor (“That way I’ll be just like Daddy and he will admire me.”) Others stated that they needed to see what the pain and fear, that they had suffered, looks like on the outside.

2) Animal abuse is often practicing what the abuser is planning to do in the future to humans. They may want to see what inflicts the most pain, or they may be experimenting in different ways to murder in terms of effectiveness. There are those who are planning suicide and want to know how to kill while inflicting the least amount of pain or how to do it in the quickest way. Most murders and perpetrators of violent and sexual crimes have a history of animal abuse (and, while we’re at it, of child abuse done towards them.)

3) Animal abuse is sometimes related to violent behavior within cults.

4) An act of animal abuse, which may be relatively innocent the first time and an act of curiosity, will then enter into the abuser’s self-image as someone who is hurtful, cruel, heartless, evil. This self-image will bring a certain amount of guilt, which in and of itself is damaging, yet invites reenactment as an attempt to understand this self-image. Each time the abuser abuses another animal, this self-image, and the damage that goes with it, gets more insidious and may then lead to violent behavior towards humans.

The abuse must be deterred whenever and however possible. Those who do go ahead and abuse animals should be given a serious sentence in a prison where they will also receive therapy. The conditions of probation afterwards should include therapy.

The Knesset vote mentioned above exposes the degree to which the members of the Knesset put the need to show one’s party loyalty, in a forever battle against the other party – no matter what the issue bringing brought up, above their conscience. I believe that the vote brings shame onto the members of Knesset for ignoring the issue of abuse. The subject has nothing to do with party ideology, is not an issue of political or economic consequence. It is simply a moral issue. This vote exposes the flawed political stance today that prevents bipartisan voting on such a non-political issue, preventing each member of the Knesset from voting according to their moral stance.

And who wins? The score: Coalition Politics: 1    Israeli Society: 0

About the Author
A member of Kibbutz Usha, I am an ardent Zionist who made Aliya from the U.S. and mother of four and grandmother of ten. "Retired" after 19 years of work in welfare institutions with maltreated children as an animal-assisted psychotherapist and social worker, I continue my work in my private clinic. I am chairperson of the IAAAP - The Israeli Association of Animal-Assisted Psychotherapy, am a researcher in the area of animal-assisted psychotherapy with maltreated children and have numerous publications in the area.
Related Topics
Related Posts
Comments