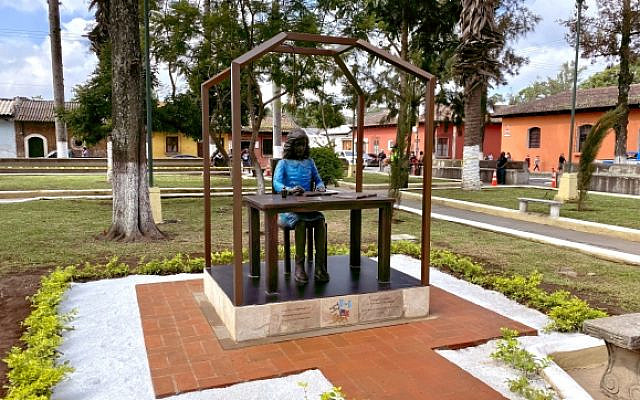 The Memorial is a gift of the Jewish American Society for Historic Preservation (JASHP) in partnership with the Jewish Community of Guatemala to the City of Antigua with support from the Embassy of Israel.

Site selection and permission to place the Children’s Memorial is due to the courage and forward vision of Antigua’s Mayor, Victor Hugo del Pozo. The Memorial is sited across the street from the National School for Girls No. 2, Antonio Castro y Escobar. At the top of the Park are the barred ruins of San Sebastian Cathedral, long fallen into decay. Saint Sebastian was murdered by the Romans, his young body riddled with arrows of hate because he was a Christian, an enemy of the State.

The Children’s Memorial is interpreted through Anne Frank. The messaging is direct. Anne Frank was a 15-year-old girl who was murdered in the Holocaust. Her fame and significance emerged after her death with the discovery of a diary she kept that was found by her father. He was the only family member to have survived after they were betrayed. They all hid, terrified in a Dutch Attic, as the Nazis and their vicious anti-Semitic supporters scoured for any sign of surviving Jews to be murdered.

Anne, with incredible optimism and humanity for such a young girl, refused to give in to the dark side, to depression. She was well aware of the ever-leering, snarling death just outside her hiding place. Instead, as one of the Jerusalem stone engraved panels quotes from her Diary, “In spite of everything, I still believe that people are really good at heart.”

A second stone is inscribed, “Of the six million Jews murdered during the Holocaust, 1939-1945, 1.5 million were children. Anne Frank was one of them.”

The most important engraved stone affixed to the base is the message of the Memorial:

“Children are the ultimate victims of adult hatred, bigotry, and ignorance.”

President Rivlin of Israel commented on the first Anne Frank Children’s Human Rights Memorial, again donated by JASHP, that is sited adjacent to a girl’s school outside of Jerusalem in Maaleh Adumim.

“Children are indeed, often victims of adult hatred, bigotry, and ignorance, and I hope there will be wide interest in your important effort.

I certainly can agree with you that when all people, everywhere, protect the children of today, peace will be one step closer.”

After a year of Covid terror delay, the fabricated Memorial was delivered to the Jewish Community of Guatemala whose remarkable President, Rebeca Permuth de Sabbagh, tirelessly worked closely with Mayor Pozo, to bring the Children’s Memorial to Antigua.

September 3, the day of dedication, an interactive part of the dedication where Guatemalan children who studied about Anne would recite essays they had written about her life’s meaning, had to be canceled by a resurgence of Covid. The German Ambassador sent regrets for not attending. Other dignitaries had to cancel. The socially distanced anticipated crowd had to be reduced.

As we arrived, the threatened rain miraculously disappeared to blue skies with Acatenango, Antigua’s 13,000’+ volcano, clearly visible just 14 km away.  The weather warmed.  The sun shone.

The Ambassadors from Israel, Colombia, and key Guatemalan Congressmen assembled with the guests and visitors as the opening, but hard to hear speeches were given.

It was not that the sound system did not work, it worked well. The ceremony was cordoned off by yellow border tape and heavily armed police. On the outside of the tape, protestors, about ten in number with children in tow banged on drums, yelled, screamed, carried signs with epithets and the Palestinian flag painted on one. They slammed metal plates, trying to create disruption.

A representative of Antigua spoke, the mayor was quarantined with Covid. Rebeca Permuth de Sabbagh spoke with great dignity. Representatives of the Guatemalan National educational system spoke. Governmental representatives shared, as did the Israeli Ambassador. The Rabbi of the Jewish Community blew the Shofar.

Not speaking any Spanish, I apologized for having learned German, French, English, and Hebrew. My words, though in English, were understood. I spoke of the meaning of the Memorial while my words were being attempted to be drowned out, “Children are the ultimate victims of adult hatred, bigotry and ignorance. Children are the hope for the future, for all people.”

English or not, the words were understood, received, and loudly applauded.

The banging and screaming of hate continued.

In the audience sat a Catholic Priest, White Collar, in traditional black attire. He is an internationally acclaimed and honored human rights hero and activist, Father Patrick Desbois. Father Desbois founded Yahad in Unum. He has worked to find the unfindable, to give memory and document what has been denied, the personalized Einsatzgruppen Mass murder of Jews during the Holocaust. He seeks out the sites, and documents the testimonies before they are forgotten of the eyewitnesses to the Jewish mass murder by the traveling death squads.

His website explains his purpose, remembering the past to shape the future.

“Our work is to encourage all societies to examine the darkest chapters of their history and to speak out against the current scourge of genocide.”

Risking his own life repeatedly, he ventures into the lion’s mouth of Iraq, Syria, Afghanistan, and places of utter darkness to save, to rescue, those who would become the victims of hate, and bigotry marked for death.

Father Desbois has created the first ever Holocaust Museum in Central America. It is located in Guatemala City. Father Desbois teaches about the Holocaust through his museum. He teaches much more about Guatemala’s past too. 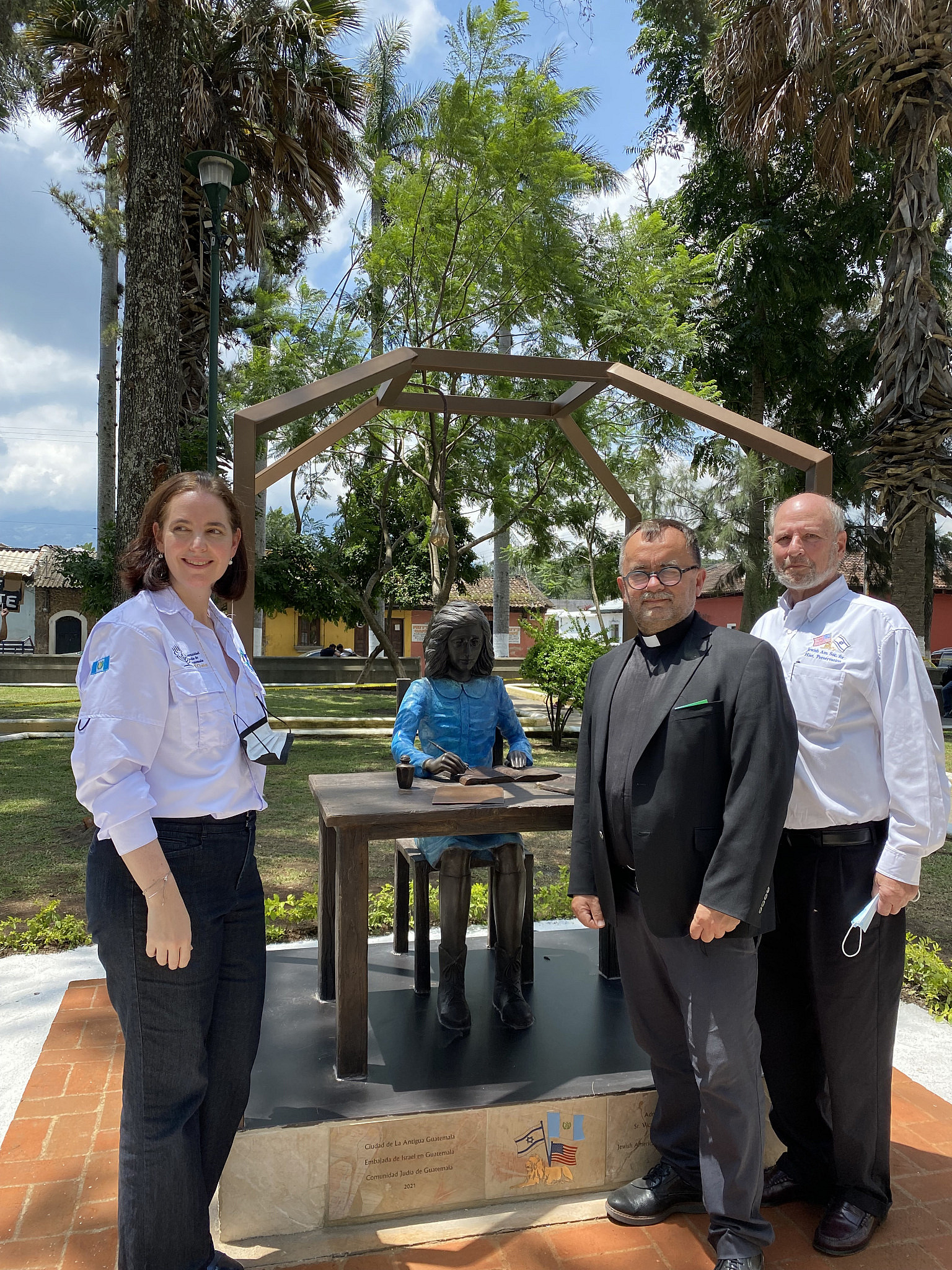 Mario Permuth, Rebeca’s father, attended the dedication. He has also risked much for peace. He was a key member of the National Reconciliation Commission that ended Guatemala’s thirty-six-year Civil War, and armed conflict that claimed the lives of an estimated 250,000 Guatemalans. Mario Permuth, behind the scenes, on behalf of a direct request from Shimon Peres, helped put the elements together to begin the “Peace Process” between Israel and the Palestinians.

The beating of the drums, the clanging of metal, the screaming until voices became hoarse from strain, continued as their little children waved their fists with anger.

The dedication ended, but the fight was beginning again over the Anne Frank Children’s Human Rights Memorial. The enemies of the Memorial had lost an earlier battle in Court when Antigua renamed a street Jerusalem Capital of Israel Street.  They were taking a different path of opposition to the Children’s Memorial.

Antigua is a UNESCO world heritage city. Antigua is considered part of Guatemala’s patrimony from when it was a Colonial Spanish capital.

The enemies of the Memorial filled the city’s Facebook pages with negative comments, some openly anti-Semitic, about the Memorial.

Their argument was that a European Holocaust story has nothing to do with Antigua’s heritage, its past, its present or its future. The Memorial was an ugly eyesore imposed on San Sebastian Park without legal process and review. (All quite false.) They were challenging the cultural relevance of the Memorial and demanding its removal.

They want San Sebastian to be returned to its past, to what its meaning was when the Spanish controlled it. Ironically, their demands mean a symbolic return to racism, religious bigotry, ethnic enslavement, and subjugation of the Native Guatemalan peoples. That does not matter to the activists who want the Anne Frank Children’s Human Rights Memorial gone.

Mayor Pozo is in a fight. Will the fight be for the past or the future?  Will he win? It is a political fight. While the vast vast majority of Guatemalans are strong allies of Israel and friends of the Jewish people, the dark hydra of unchecked hate lurks beneath the surface of any society. It must always be confronted.

A new Anne Frank Children’s Human Rights Memorial is in fabrication. It will be placed in Addis Ababa, January 27, 2022, International Holocaust Remembrance Day.

Doing the right thing is not always the easy thing.