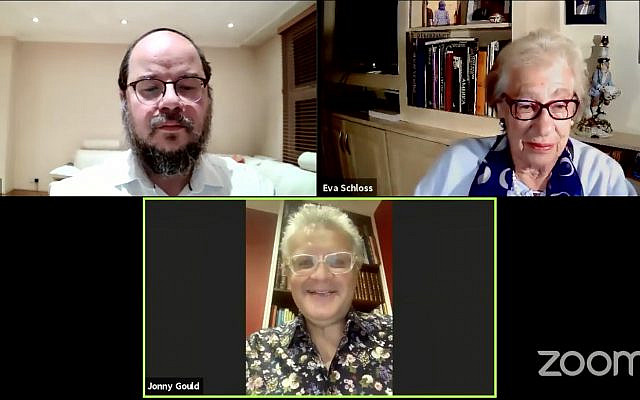 The Zoom between Eva Schloss, Jonny and Rabbi Yosef Vogel

Each year, we steel ourselves for Yom Kippur, to fast for 25 hours, to seek forgiveness from G-d and our fellow man and woman.

But this year, I was confronted with forgiveness on a completely different level, perhaps even the most extreme form there could ever be.

Eva Schloss, step-sister of Anne Frank, had her childhood and all she knew stolen from her.

Yet she has forgiven the Nazis for those severe crimes committed against her and her family.

With just a couple of days notice in between Rosh Hashanah and Yom Kippur, I was given the opportunity by Rabbi Yosef Vogel of London’s Centre for Jewish Life to host a live hour-long interview with Eva.

As Yom Kippur is about forgiveness, Rabbi Vogel told me that would be the interview theme.

I take deep breaths when contemplating this emotion. The Holocaust echoes down the generations in my own family too.

Like Eva, my grandma and grandpa hailed from Vienna and fled to England as late as April 1939. My great-grandparents were murdered in Chelmno extermination camp.

Before Eva, I had interviewed Hungary’s ambassador to the UK, Ferenc Kumin, who discussed in some detail his “moral drive” to reach out to the Jewish community and Israel and to address what he called, “the Hungarian Holocaust”.

So I was keen for Eva to illuminate that tension between peacemaking and remembrance.

Just a child, Eva and her family were hunted wherever they fled, leaving forever an idyllic “happy childhood” of “family and cousins” in Vienna as Germany annexed Austria in 1938.

They first ran to Belgium and then onto Holland.

From the age of eleven, Eva had to learn new languages in foreign lands, bullied by teachers and pupils for her foreign accent.

Her father Erich and brother Heinz didn’t survive the Holocaust.

She was very close to Heinz. Her older sibling was protective of her, a clever boy who read her stories from his many books. She described herself to me as “more of a wild child”.

But she was never allowed to indulge or fully express her adolescence like the rest of us.

She lived in the same apartment block in Amsterdam as Anne Frank, and the girls, only a month apart in age, were playmates up to their first days of teenagehood.

But in 1942, both girls went into hiding to avoid capture.

Holed up in an annex, Eva describes to me the frustration of being “more the sporty type than the intellectual”.

From even that, she was disqualified.

In May 1944, Eva’s family were betrayed by a double agent in the Dutch underground. Her family were split into two and the agent turned informer when Eva’s father had arranged a clandestine reunion between them all. “Something to look forward to”, her heartbreaking assessment of a glimpse of family life denied.

She ended up in Auschwitz, bearing witness to the most extreme violence and murder all around her.

Eva and her mother were freed in 1945 by Soviet troops, barely alive. However she lived, battered both mentally and physically.

At first, Eva thought she’d been rendered infertile by the endurance of incarceration and starvation. She didn’t have periods for years, but thankfully they returned and now she’s a mother and grandmother.

In later life, Eva has become a world figure relating her life story to subsequent generations.

Yet despite such grievous loss, Eva forgives the Nazis and says it was her stepfather, Otto Frank, Anne’s  father who helped her forgive those who caused her such heartache.

“Hate poisons your own life and that I learned from Otto Frank”, she told me. “He came to me when I was 18 (after the war) and said though I’ve lost everything, all of my family (his daughters Anne and Margot Frank and his wife, Edith), all I have are the clothes I’m wearing. But I can’t hate the Germans”.

He continued to Eva, “If you hate people, who suffers? You do. The people you hate don’t know and they just carry on with their happy lives – but you become miserable and can’t function”.

Eva has taken on Otto’s message and unburdened herself of any hate toward the perpetrators of the crimes committed against her and her family.

“Even if they did terrible things, it wasn’t perhaps their own initiative. It was out of the times. They were forced to do things. They were certainly not all bad people. I accepted what the Germans had done and it was a relief for me and it changed my whole attitude”.

Even while she was recounting her memories to me, I couldn’t help but think her mindset in old age was to push away the decades of post-war hurt. Better to deny one’s darkest emotional excesses then self-inflicting more hurt.

I’ve had many people react to the interview and say they couldn’t possibly do the same. They could never forgive such grievous crimes.

But Eva’s severely and expensively learned life lessons teach us that forgiveness is a form of self-preservation.  Hate and anger destroys one’s own life.

“If people can forgive, they’ll feel much happier in their own life, why wouldn’t they want to achieve that?”