PM Netanyahu’s announcement that he is setting the stage for annexation of areas of the West Bank/Judea and Samaria as part of the implementation of the Trump plan early July this year, has ignited a lively public discussion in Israel and not only here. Initially, it appeared to be clear who was for and who was against and the usual suspects all took their pre-assigned positions. The Left, without exception, clamoured against annexation or extension of Israeli law to the territories, a softer term describing if not exactly the same legal step, certainly the same end result. The Right, of course, argued in favour. However, almost immediately, an important part of the Right, the settler movement, organized and came out strongly against annexation the way the Trump plan envisages it.  What’s the problem? The State of Palestine of course which the Trump plan has put smack in the middle of the whole construct, disturbing and limiting the development of many Israeli settlements, impeding and complicating traffic in the region and in the minds of not only the settlers, causing a major security threat right in the center of the State of Israel. At the same time this discussion is playing out, the world around is slowly waking up to the impending development and not surprisingly is up in arms over the threat annexation poses to a negotiated solution with the Palestinians and their human and civil rights in general. 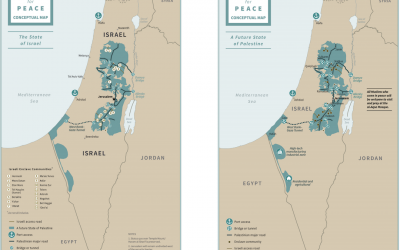 While anyone in his right mind could certainly have expected the international outcry against annexation, it doesn’t appear that the government of Israel has made the preparations necessary to deal with the public relation consequences of Israel’s impending policy change. As a result, official spokespersons are mum and there is a considerable amount of uncertainty over the whole enterprise, which, as many of PM Netanyahu’s detractors claim, is fake news anyway. They seem to think that annexation is not for real and PM Netanyahu is using the discussion to divert public attention from other, more pressing issues like the dire economic situation or his court case.

What is contributing to the fog is the fact that neither Netanyahu nor anyone else from his government have clarified which part of the Trump plan will be executed, what annexation would include and what the planned schedule is. Worst of all, no clear indication has been given regarding the fate of the Palestinian population in the areas that will be annexed. PM Netanyahu has indicated that with regard to annexation of the Jordan Valley, there is no intention to provide local Palestinians with Israeli residency or citizenship.  That certainly is a bad omen since the Palestinian population there is small, in the tens of thousands only and giving them citizenship would be of marginal demographic consequence for Israel while at the same time alleviating considerable international pressure and could even garner at least local Palestinian support of the annexed population.

So while the implications of impending annexation are slowly beginning to raise widespread concern, neither the schedule, nor the scope, nor the consequences for the Palestinians on the ground are being clarified. Thus, what may yet become a major Israeli policy change with considerable local and international impact could morph into a major threat to stability whose consequences must be managed astutely at many levels while the country is under severe economic pressure caused by the ongoing Corona pandemic and PM Netanyahu’s attention is with his court case.

There is no doubt that under these circumstances the collateral damage from the looming annexation could bring down the government and cause, for the 4th time in a row, early elections, even though no clear alternative to the Netanyahu-Gantz coalition is presently on the horizon. What will most certainly happen though is that the conflict with the Palestinians which has hardly been mentioned in the run up to the last three elections will, this time around, become a central issue and give rise to new and innovative proposals for a peace arrangement that so far have been studiously ignored.

About the Author
The author served in the Prime Minister’s Office as a member of the intelligence community, is a member of the Council for Peace and Security, Vice Chairman of the Israel-Indonesia Chamber of Commerce, Co-Chair of the Federation Movement (www.federation.org.il), member of the council at 1948.co and author of "Identity: The Quest for Israel's Future".
Related Topics
Related Posts
Comments