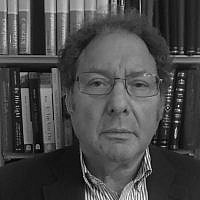 The Blogs
Martin Polack
Apply for a Blog
Advertisement
Please note that the posts on The Blogs are contributed by third parties. The opinions, facts and any media content in them are presented solely by the authors, and neither The Times of Israel nor its partners assume any responsibility for them. Please contact us in case of abuse. In case of abuse,
Report this post.

Antisemitism is God’s plan to prevent the Jews from fully assimilating. In the section of the Torah known as the “Tochehah”, the “Curses”, (Dvarim 28:65), it is written, “Among these nations you will find no ease, neither shall the sole of your foot have rest”.

This curse prevents the Jews from becoming intermingled with the other nations and from becoming like them, and it was that which at various times served to keep our nation alive. Ibn Ezra explains on verses 36-37,” you will serve other gods and you will be a horror,” as meaning that even though you try to assimilate, it will do you no good; you will still be a horror and hated. This is a terrible curse, but it contains a blessing within it. Had it not been for this curse, assimilation would have been much worse.

“But the dove found no rest for the sole of her foot, and she returned unto Noah into the Ark” (Breishis 8:9), Rabbi Judah ben R. Nachman, in the name of R. Shimon stated: If it had found a resting place it would not have returned. Parallel to this we find (Eichah 1) ”She dwells among the nations, she finds no rest” – if she would have found rest, she would not have returned.”

Thus, if the Jewish people had found rest, they would not have returned. Antisemitism has performed a very valuable service to the Jewish people. Jewish existence relies on Jewish awareness. The antisemites’ gift to the Jew is Jewish self-awareness. This, then, should be seen as the ultimate purpose for God’s implanting antisemitic feelings into the essence of the non-Jewish world. This is particularly important for non-Orthodox Jews whose connectedness to the Jewish people is more tenuous.

As far as Jewish self-awareness is concerned, antisemitism serves to protect the Jew from the assimilationist trend. Antisemitism, can be in the form of physical violence, or in the more covert, non-hostile form, for example, when hiring managers at businesses reject resumes when they see names like Goldstein, Rosenberg or Silverman.

About the Author
Martin Polack is a business analyst who spends his spare time involved with adult Jewish education.