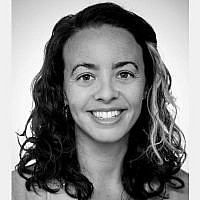 The Blogs
Abby Brockman
Apply for a Blog
Advertisement
Please note that the posts on The Blogs are contributed by third parties. The opinions, facts and any media content in them are presented solely by the authors, and neither The Times of Israel nor its partners assume any responsibility for them. Please contact us in case of abuse. In case of abuse,
Report this post.

I read with confounding heartbreak this morning the recently published piece by Rabbi Avi Weiss, “In pain…calling out Senate candidate Rev. Warnock.”

Rabbi Weiss is a revered and highly respected Orthodox rabbi, a longstanding and outspoken advocate for equality and social justice, a courageously visionary activist who shed light on important issues decades before anyone else was willing to join him, and, while I’ve never had the zechus — the merit — to meet him in person, he has been a personal role model to me for many years from afar.

Yet I found this piece to be harmful, problematic, and dangerously misguided. I decided to respond publicly both to follow his lead and because the crux of his approach is something I see espoused across the Jewish community that I feel must be vociferously addressed, confronted, corrected, and reckoned with.

So it is in this spirit that I’d like to respectfully share four concerns here in response:

1) This piece judges Rev. Warnock, a Black American progressive politician, solely for his stance on Israel instead of evaluating — or at least nestling the critique within the greater context of — his position on American issues, politics here at home, and his role in supporting Black liberation and equality. This would be as easy as saying, “I support Rev. Warnock and strongly encourage us all to do so because of his incredible work doing x, y, z, and in light of the critical importance of the upcoming Georgia Senate race. And, that said, I hope we can dialogue about some concerning comments he has made regarding Israel and issues important to our community.”

Instead, the result may be one or both of two unjust outcomes. First, critical Jewish support being withheld from candidates who are needed for the work they do here in advocating for progressive politics for all and fighting specifically for Black and otherwise marginalized communities of color. And second, it can make Jewish support for racial justice transactional by making it determinative on whether and how the Black community stands against anti-Semitism and in support of Israel.

2) Rabbi Weiss’s piece lacks an analysis of power. Through citing things like Hillel’s famous saying of “If I am not for myself who will be for me,” it seems to portray or subtly imply that the Jewish community is equal in position, stature, and footing to the non-Jewish Black community and that this critique is therefore addressed to an equal partner.

But the Jewish community is not a group best described as being actively oppressed and in great need to speak up for itself. We have in fact overall been able to accumulate equity, benefit from upward mobility, succeed in educational and professional environments, and accrue power since we first arrived on these shores being literate and numerate. Jews were in the first college classes and disproportionately represented in the first halls of government. Jews were able to own the very shops the lunch counter sit-ins occurred at during the height of the Civil Rights movement. We were able to benefit from the incredible impact of the GI Bill. We were able to build successful institutions and organizations that were then present to help support post-Holocaust immigration.

It doesn’t mean it was easy, that there were no hardships, or that there weren’t any signs excluding Jews from businesses or certain housing communities. But it does mean that overall the American Jewish story has been one of access and accomplishment.

Yet owning this is difficult for us. As Rabbi Micah Goodman explains, part of this is due to the gap between our biblical stories and our collective biblical memory. “Our founding story is about a powerless people becoming powerful,” he teaches. “This is our founding story but not what Jewish memory is about because we’re only asked to remember the first half of the story. Think about it — are there any Jewish festivals, chagim, where we celebrate the monarchy of King Solomon? The victories of Joshua? The people of Israel conquering the land of Israel? The greatness of David? No. All those chapters we read, but we don’t celebrate them. Jewish tradition doesn’t direct our memory towards those parts where we were strong and powerful, only to the first part where we were slaves.”

Another part is due to the very real impacts of unhealed intergenerational trauma that leads us to still hoard resources and focus on ourselves. But either way, while we should absolutely advocate for the needs and concerns we do have — and of course combat anti-Semitism — we must find a way to do so that also acknowledges the power, privilege, and access that we have often had since we came to these shores.

Besides, as much as we maintain a victim narrative, we’re certainly not being oppressed by Rev. Warnock, due to the same reasons why reverse racism doesn’t exist: there’s no systemic power behind criticism from the Black community because of how our government continues to treat the Black community in comparison to our own treatment — which is demonstrated by the millions of dollars given every single year from our country to Israel.

3) This piece lacks much-needed nuance about the issue of Israel in general. For example, when Rabbi Weiss writes that “Israel’s military is one of the most moral,” yet supports that claim only by listing a few good things it has done, such as helping Syrian refugees. This ignores — instead of grappling honestly with — very well-documented actions by the government and army that have been atrocious and polemical. Painting over these with a broad paintbrush does not serve anyone’s purposes and certainly not truth.

Or when he contests Rev. Warnock’s description of the security fence as walling in the Palestinians and being similar to the Berlin Wall solely because it has decreased terrorist attacks and Palestinians can still cross the fence into Israel regularly for work. This ignores and invalidates the experience of Palestinians and thus feels like an act of erasure lacking in empathy. It feels like simplistic Israeli propaganda that assesses the fence based solely on what it does for Israel, instead of also how it impacts Palestinians. That is, the wall lowering terrorist attacks may still feel like it walls in Palestinians, and 87,000 work permits issued (if we trust this number) doesn’t mean recipients can easily get to work when passing through the checkpoints, or that they are treated well when crossing or working in Israeli society.

Or when Rabbi Weiss seemingly justifies support of the wall without much substance. I wonder if he would use the same reasoning here in America and advocate that we should build a wall between the US and Mexico because it would decrease criminals (which exist in every country) coming into our country, while still allowing select people to come through checkpoints. My guess is that in the non-Israel context, he might feel that a wall also decreases asylum seekers and people looking for a better life, that crossing the border could still take hours, and that there may be other options that decrease criminals without such high costs.

I’m not saying that the Israeli military is immoral or that the impacts of the security fence on Israel’s safety aren’t important. Just that these issues are more complicated and deserving of more nuance than Rabbi Weiss affords them.

4) I fear this piece is an example of another tendency I have noticed among some American rabbinic clergy to speak up, pen op-eds, and use their time and energy to critique progressive issues and candidates who aren’t 100% perfect, instead of focusing on the more blatantly problematic figures and issues.

This has looked like rabbis writing in broad support of racial justice while focusing on critiquing violence (often falsely) attributed to protestors, instead of the violence that caused the protests or is deployed by police in militarized gear, deploying tear gas and pepper spray on peaceful protestors marching or having quiet candlelight vigils. It has looked like rabbis advocating for non-violence based on their own definition of it essentially meaning quiet acceptance of the status quo without discomfort or fundamental change instead of recognizing that civil disobedience is inherently disruptive and inconvenient. Or, in this case, like choosing to critique Rev. Warnock the week of a crucial Senate race, instead of his opponent, Kelly Loeffler, who has promoted both racist and anti-Semitic tropes, sought to take away healthcare from millions by supporting efforts to rescind the Affordable Care Act, and threatened the credibility of our electoral process by supporting Trump’s claims of voter fraud without any evidence.

I realize that there is a possibility that I misunderstood aspects of Rabbi Weiss’s piece, made unfair assumptions myself, or didn’t write nuanced or carefully enough. I may be well-deserving of correction or feedback — and welcome it, as I am still learning how to think about these issues!

Ultimately though, I agree with Rabbi Weiss that speaking up is important and believe we must also do so among and with ourselves and I hope that this is the spirit in my words here today. I say this with all the respect in the world and hope I have adequately taken the time in writing this so that it comes through.

I remain boundlessly grateful for and humbled by all Rabbi Weiss has done, continues to do and teach and lead, and is, as a person and beloved rav. May all of our efforts lead to mutual learning and solidarity that aligns with our deepest Jewish values and redistribute power in tangible and meaningful ways.

About the Author
Abby Brockman (she/her) is a Jewish trauma chaplain and spiritual caregiver at a pediatric hospital in Seattle, WA. She is also an organizer for racial justice, especially in Jewish communities that are new to the work, where she is passionate about helping heal intergenerational Jewish trauma so we can unclench from fear, decenter from victimhood, and find true power in solidarity.
Related Topics
Related Posts
Comments