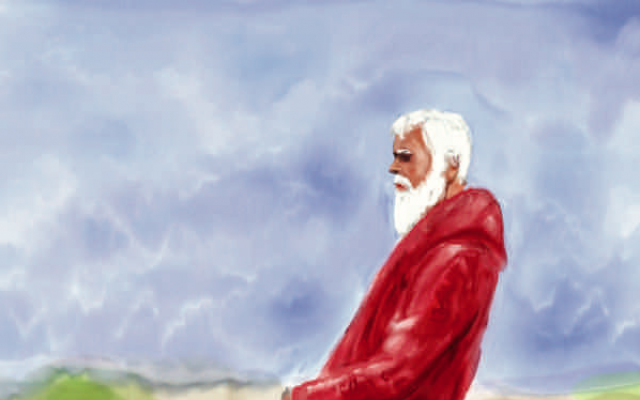 As characterized in the Hebrew Bible, Moses was a giant, but anguished character. The Lord’s commission to lead the Israelites from slavery in Egypt to freedom in the land of Canaan, in effect, caused Moses to sacrifice most of his adult life.

After the meeting at the miraculously Burning Bush, Moses spent almost all his existence in a totally barren, inhospitable Wilderness. He had not one minute of respite since leaving the luxury of the Egyptian royal court and tending his father-in-law’s sheep. And, given the Israelites’ constant rebellions and recalcitrance, he really had not one minute of happiness. In fact, having almost entirely forsaken family life, he was unable to experience a satisfying life of his own. It is possible that he felt some contentment or pride in his encounters with the Lord, but nothing in the Bible indicates that this was the case.

Is there anywhere in the story that indicates the Lord’s affection or gratitude for Moses’ sacrifice? On the contrary, the Bible illustrates that Moses’ one misstep, failing to “sanctify” the Lord at the waters of Meribah, was enough for him to receive unremitting punishment: The Lord prohibited him from completing the journey he had led for 40 years.* He died alone in an unknown place — a humiliating end for such a powerful leader.

Some might say the punishment did not fit the crime, considering Moses’ monumental sacrifice. No other Hebrew leader, from Abraham through the rest of the patriarchs to Joseph up to Moses himself, made this level of commitment to the Lord. Thus, his legacy as the most incomparable of all the ancient Hebrews. (Though Abraham’s willingness to sacrifice his son Isaac at the Lord’s command might also be mentioned).

What does this say about Moses’ relationship with the Lord? Why put a man with unbelievable leadership abilities through terrible trials and crush him at the end of his life, a life of total dedication?

This view of Moses is unusual. It shows an unexplored facet of this epic story. In a way, this unexpectedly unhappy ending makes the story more believable.

*I give my thoughts on the real reason for the Lord’s harsh punishment of Moses at the Waters of Meribah in my book, Talking With God, pages 18–19.

About the Author
Roger D. Isaacs is an independent researcher specializing in Hebrew Bible studies and the author of two books, "Talking With God" and "The Golden Ark". Isaacs' primary research site was the archives of the Oriental Institute at the University of Chicago, where he is a member of the Advisory Council. He also conducted research at the Spertus Institute for Jewish Studies, as well as digs, museums, and libraries in many countries, including Syria, Jordan, Turkey, Egypt, Israel, and England.
Related Topics
Related Posts
Comments
Advertisement