The Blogs
Laura Wharton
Apply for a Blog
Please note that the posts on The Blogs are contributed by third parties. The opinions, facts and any media content in them are presented solely by the authors, and neither The Times of Israel nor its partners assume any responsibility for them. Please contact us in case of abuse. In case of abuse,
Report this post.

For the past several years Sukkot has been a time of frustration and outrage for women activists in Jerusalem. This year was especially trying.

The ultra-Orthodox have a special Sukkot tradition called “The Drawing of the Water” (Simhat Beit Hashoeva), a celebration that draws large numbers of visitors, mostly ultra-Orthodox, into the small and crowded neighborhood of Mea Shearim.

The festivities themselves, for what one can see from the outside, are no great event: it seems to me that only the Haredi population, culturally starved and closed to most of the world, could actually get excited at the sight of a bunch of religious men dancing in circles to tedious and uninspiring music. But what has turned this relatively dreary happening into a source of conflict is the ultra-Orthodox solution to its growing popularity. Concerned by the crowded streets and  density of onlookers that brought about, in their opinion, too-close contact between men and women, they decided to ban women from some of the streets in the neighborhood. To insure that their decision was upheld, they built fences, put up signs, and hired ushers who enforced gender segregation with the use of megaphones. This year, one group of outsiders braved the barriers and was attacked, with one man taken away in an ambulance after a rock hit him in the head.

The segregation was no secret; it was announced on billboards weeks in advance. Over the past few years, several appeals to the Supreme Court have addressed gender segregation, and it has been ruled illegal. Yet none of this prevented the construction of the fences, the signs, and the ushers from doing the bidding of the ultra-Orthoddox leaders. Worse still, this year’s arrangements were made with the consent and collaboration of the municipality, the police, and many of the city council members — one of them a woman who in the past was outspoken in her condemnation of such separation.

Why and how can this go on in Jerusalem, supposedly a modern city within a democratic society? There are several possible explanations, and I will offer three.

First of all, Israeli politicians — and especially Jerusalem’s mayor — are always eager for quiet. Elections are coming up fast, and the ultra-Orthodox are notorious for being able to cause a ruckus. When an ultra-Orthodox woman was arrested in 2010 for child abuse, tens of thousands of ultra-Orthodox hit the streets, causing more than a million shekels in damage and injuring several municipal employees. Farther back, in 1999, an estimated 200,000 ultra-Orthodox protested in Jerusalem against the Supreme Court after a number of decisions (most notably regarding the draft) that affected their standing. The ultra-Orthodox don’t recogize the right of the state, or any of its arms, to set or  enforce laws; the average incumbent would rather appease them than raise their ire. Bedlam looks bad on the news and turns away tourists, Jerusalem’s bread and butter. 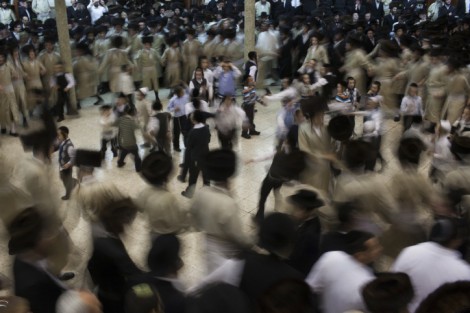 Second, the ultra-Orthodox have a very disciplined electorate. In Jerusalem’s local, community elections the candidates backed by the rabbis in ultra-Orthodox neighborhoods won 98.2% of the vote, a higher percentage than Assad won in the last elections in Syria. Although ultra-Orthodox are only 20% of the population in Jerusalem, their high turnout has won them twice that percentage of representatives in the City Council. Nationally, they are less than 10% of the population, but when the left and right blocs are nearly balanced, a small but reliable corps of supporters can be crucial.

Third, when news is grim, everyone likes to make a show of victory. Last year at Sukkot the barriers were solid; this year, there was just a fence, and women and men could see one another across the dividers. Last year, the ushers were from outside the community and were paid a salary; this year, they were volunteers from within the ultra-Orthodox community, thereby evading the problem raised in the Supreme Court appeal. Last year, there were signs all over the neighborhood explaining that there would be gender segregation; this year, there were only signs on the streets themselves and the police vowed to remove them. Are these indicators of a triumph, as some have claimed? That is at best an exaggeration. One might also say that the contrary is so, since these changes were made after consultations and negotiations. If before, the state of affairs was a source of outrage and prompted condemnation from the authorities, the minor appeasements have now been officially sanctioned.

But it is not only women who are being demeaned and becoming disillusioned. Women are only the most vocal of the many groups who have become victims of the religious extremists. The ultra-Orthodox children who are doomed to ignorance, the Arab citizens who are degraded, the homosexuals who are ostracized — these are but a few of those who are suffering because of the willingness of the authorities to turn a blind eye.

Israel is in many ways a vibrant democracy, but its control is shrinking.  The right wing’s “small” government is expressed not only in the cuts in social services but in a growing unwillingness to enforce the law. The police are unwilling to enter ultra-Orthodox neighborhoods (the few that do only go in as plainclothesmen), just as they won’t go near East Jerusalem. Someone should be brave enough to risk provoking some demonstrations, to lose the votes of people who are ideologically dangerous, and to present the harsh truth.

Anyone who is willing to accept that women and men should be kept on opposite sides of a fence must be so desperate to get re-elected that it’s almost scary.

About the Author
Dr Laura Wharton is a member of Jerusalem's City Council as a representative of Meretz and an adjunct lecturer in the Department of Political Science at the Hebrew University. Born in the U.S., she immigrated to Israel after receiving a B.A. in the Department of Government at Harvard University and then served a full term in the Israel Defense Forces. She subsequently completed a Master's degree and a Ph.D. at Hebrew University. She is a mother of two and has been living in Jerusalem for more than a decade.
Comments