As Labour implode, non-Conservative Jews look for a new home, but Tim Farron is rapidly showing it won’t be the Liberal Democrats.

The new Lib Dem leader has carried on a proud party tradition of not acting on anti-Semitism.

Last week, he backed the reintegration of David Ward, saying that the anti-Israel MP had ‘served his time’.

This week, following another outburst from Baroness Jenny Tonge about Israel being the main ‘reason’ for anti-Semitism, they have again refused to act.

No right-minded member of the Jewish community is going to back a party which refuses to take action on its members who are beyond the pale.

The Lib Dems have consistently failed to act.  David Ward was suspended for a while by the party, for advocating the firing of rockets into Israel from Gaza. He has a history of crass comments about the Holocaust in relation to Israel, including when he said he was saddened that ‘the Jews’, years after the Holocaust could be “inflicting atrocities on Palestinians”. He was given training and allowed to remain.

Since being welcomed back by Tim Farron, he has continued to spew bile on Twitter, this time reacting to the cross party Home Affairs Select Committee’s report on anti-Semitism. 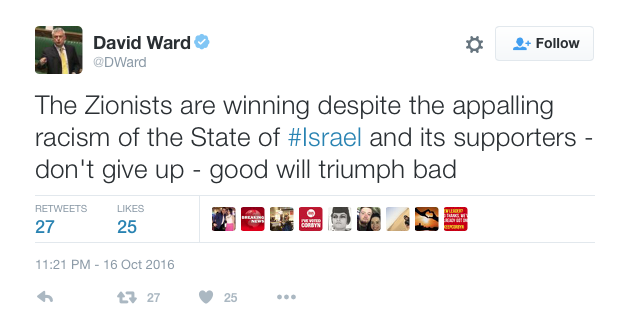 And then there’s Baroness Tonge, who has had the whip suspended in parliament for saying Israel “is not going to be there forever”. She has shared articles from Gilad Atzmon, posted about ‘Jewish power’, and the pro-Israel lobby’s “grips on the Western world”.

Following the anti-Semitism report by the Home Affairs Select Committee this week, she caused outrage, writing a letter to the Guardian, saying it “would have been more useful if it had investigated the causes of anti Semitism”.

The cause, “it is surely the case” she says, “that these incidents are reflecting the disgust amongst the general public of the way the government of Israel treats Palestinians and manipulates the USA and ourselves to take no action”.

If that’s not a justification for anti-Semitism, I don’t know what it.

I have some news for you Jenny. Anti-Semitism is caused by ignorance and hatred towards Jews, not just by the actions of Israel.

And once again, the Lib Dems did nothing.

The party repeats that neither Ward or Tonge are representative of the party, yet they refuse to act on their continued membership, and in David Ward’s case, they’ve rewarded him.

Back in May, Tim Farron appealed to Jewish News readers in an article entitled ‘Prejudice is a problem for all parties, mine included’. He tries to show us that his party is the alternative to Labour for our community, stressing the need for a change in dialogue and the need to build bridges with the community.

Does the continued membership of Baroness Tonge and David Ward contribute to this?

When the Lib Dems explain and excuse away Ward and Tonge’s views and presence in what is supposed to be a Liberal party, they are unlikely to have the Jewish community’s support.

This is an issue of persistent spinelessness on a clear-cut problem, and it’s a major roadblock to the Jewish community considering voting Lib Dem.