The following account was given over to me by a video journalist friend of mine after one of his many projects in the Old City of Jerusalem and then a subsequent Shabbat he spent there.

On Shabbat I was at the Rova in front of the Hurva Synagogue and there was a group of Jews there arguing. After the argument died down, I approached them and began to overhear that it was a political debate. I asked them what the debate was about. One of the guys told me that it was about the Israeli-Palestinian conflict.

I quickly replied to them “there’s no debate…when you look at the PLO and Haj Amin Al-Husseini, you understand what they’re about”. One of the guys responds to me “ ‘terrorism’ is just a term”.

I said, “No it isn’t. Don’t you call Hamas terrorists?” I then asked him “can you name terrorists from Israel?” “Yeah, Baruch Goldstein”, he replied. I responded “Baruch Goldstein was one instance. It’s not an organized group, waging a sustained campaign..”

I then asked “Can you list for me more Israeli terrorists?”. He answered “Palestinians see IDF soldiers as terrorists and I can understand why they would” I respond, “First of all you need to know who Haj Amin al-Husseini was before you understand what terrorism is and before you can sympathize them. Secondly, the majority of people in Israel are not Kahanists, contrary to the assumption that you make. Not everyone wants to murder Arabs.  Judaism doesn’t call for this. You should have seen the photo I took last week of Israeli-Arab kids pointing toy guns that look like real guns only at Jews passing by near Zion Gate. They quickly put their guns away and continued to eat their ice cream, as soon as they saw me taking a picture of them. So you can see exactly where the sentiments lie and with whom. There is no comparison.”

A bit more into the conversation, I found out that these guys are learning at a yeshiva called Yeshivat Ma’ale Gilboa, in their English program. I know it’s the beginning of the year, but if this is what the students are being taught at a yeshiva that claims to be teaching Torah values, and furthermore, their students join the army for 3 years, usually in the elite of the elite units, I fail to grasp why these boys are representing the yeshiva in that way. Maybe it should be clarified. Did not they not learn the pasuk from the Talmud “those who are kind to the cruel, will be cruel to the kind”? Or do their rabbi’s just leave that part out.

These are just questions. I’ve made an inquiry in both Hebrew and English on the FB pages of the yeshiva. On the Hebrew page, I got a response that my question “will be looked into”, but not only did I not receive an answer, I was immediately blocked. The reason given was that the yeshiva did not want such discourse on their Facebook page. On the English page, after posting my sentiments, I made it clear that I took a screen shot of what I wrote and immediately received a response which ignored most of what I had written and instead was the following:

The conclusion from this entire discourse: my feeling is that many American kids who come here to study Torah and Zionism, and then go on to serve in the army, seem to have a limited knowledge of the history of the conflict in this region. Yeshiva’s and Mechinas (pre-army academies) should in fact encourage the students to expose themselves to the facts about the history of this region. I hope that this will not fall on deaf ears and will illuminate yet another significant issue that should become a conversation in the Jewish world. 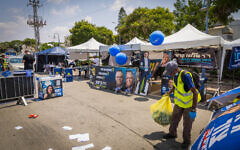