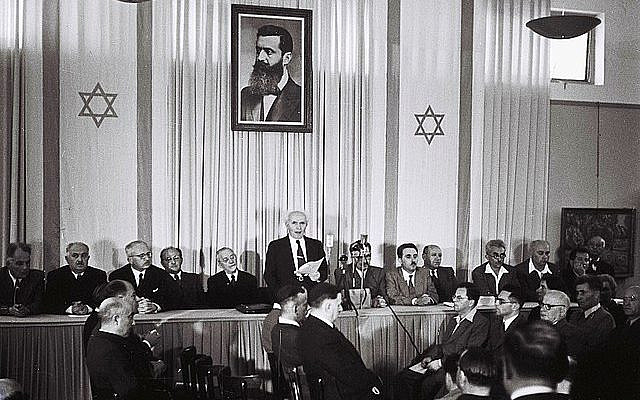 TEL AVIV, ISRAEL - MAY 14: In this handout from the GPO, David Ben Gurion, who was to become Israel's first Prime Minister, reads the Declaration of Independence May 14, 1948 at the museum in Tel Aviv, during the ceremony founding the State of Israel. (Photo by Zoltan Kluger/GPO via Getty Images) *** Local Caption *** David Ben Gurion

The state of Israel will promote the development of the country for the benefit of all its inhabitants; will be based on precepts of liberty, justice and peace taught by the Hebrew prophets; will uphold the full social and political equality of all its citizens without distinction of race, creed or sex; will guarantee full freedom of conscience, worship, education and culture; will safeguard the sanctity and inviolability of shrines and holy places of all religions; and will dedicate itself to the principles of the Charter of the United Nations.

From Israel’s Declaration of Independence, May 1948

There is a new political party in Israel that was recently elected to be part of Israel’s parliament called the Knesset, with six seats. It is mislabeled Religious Zionism but there is nothing religious or Zionist about it. On the contrary, it represents huge distortions and mutations of both Judaism and Zionism, which must be repudiated by the majority of Jews in Israel and in the Diaspora.

This new party is a mini-coalition of three far-right political parties: Habayit Hayehudi (“The Jewish Home”), led by settler “leader” Betzalel Smotrich, who used to be the “bad boy” of the settler movement and now has been mainstreamed; Otzmah Yehudit, (“Jewish Power”) led by Itamir Ben Gvir, who is an avowed follower of the neo-fascist ultra-racist Meir Kahane, whose political party called Kach was banned from the Knesset many years ago, when out-and -out racism was not allowed in Israel; and Rabbi Tzvi Thau, who is anti-gay, anti-pluralism, anti-everything, whose tiny fringe party which is strangely called Noam (“Pleasantness”) was also beyond the pale until recently.

These three dangerous political parties merged into one during the last election in March of this year, urged on by criminal defendant number 1 in Israel, Prime Minister Benjamin Netanyahu, who felt that he needed this party in order to form a fully right-wing coalition government. Yes, our Prime Minister — who once upon a time used to be a sane centrist in Israeli politics — paved the way for these very devious politicians to become part of Israel’s parliament.  In an ironic twist, the leader of this new political party Mr. Smotrich just prevented Netanyahu from forming a right-wing government because he could not countenance the support of a moderate Israeli Muslim political party known as Ra’am led by Dr. Monsour Abbas.

This group of rambunctious and irresponsible political parties is anti-religious and anti-Jewish since it ignores one of the most fundamental concepts in Judaism, i.e.  that all human beings are created in the image of God and therefore they all have human rights, since they are created in the divine image. They are openly anti-Muslim and anti-Christian in their statements, writings and actions. Their followers have attacked and vandalized countless mosques, churches, homes and people through the Tag Mechir (“Price Tag”) movement of so-called “hilltop youth” who live in anarchic settlements all over the West Bank. During the past decade or more by now, these wild young people — with a wink and a nod from the settler movement and their political leaders — have constantly attacked innocent Palestinians, peace activists and others, often just for kicks. Their anti-other polemics — which have been written by some of their leading “rabbis” are well known to the police, the security services, the courts and the media in Israel. One of their leading racist “rabbis” — Rabbi Elitzur of the super extremist “yeshivah” known as Od Yosef Chai, (“Joseph Still Lives”), near Nablus, has even recently been tried and lightly sentenced for his incitement, signaling that his incitement is tolerated, even by courts of justice in Israel.  Their political leaders spew hateful rhetoric every day in every way — in the Knesset, in the media, in the streets, in social media.  They are an embarrassment to Judaism and to the State of Israel.

In contrast, there is a group known as the Tag Meir (“Light Tag”) Forum, which represents over 50 groups in Israeli Jewish society–including Orthodox, Conservative, Reform, Secular, and Cultural Jewish-Zionist groups throughout Israel. This pluralistic Jewish coalition — with which I have been affiliated during the past 10 years — offers a much more normative presentation of Judaism — and Judaism’s approach to non-Jews — than the above-mentioned political parties and their followers. This group understands that we were strangers in the land of Egypt and therefore we, as Jews, must treat minorities fairly in the Jewish state.

These right-wing fringe political parties, which do not represent the majority of Jews in Israel, are also fervently anti-Zionist, despite their claim to represent “Religious Zionism”. The overwhelming majority of genuine religious Zionists in Israel reject their racist ideology and are embarrassed that they were elected to be in Israel’s parliament. These far-right political parties are, in fact, trying to turn mainstream Zionism (which seeks to have a Jewish and democratic state, based on the ideals of Israel’s foundational document, the Declaration of Independence of May 15, 1948) into a very weird distortion of the original values upon which Israel was founded — values of justice, equality, fairness, and the importance of seeking peace with our neighbors. Since these parties are anti-Arab, anti-justice, and anti-peace, they are in their policies and practices effectively anti-Zionist.

Let’s take the case of Itamar Ben Gvir, the leader of Jewish Power, who is now in the Knesset, Heaven help us. He is an extremely dangerous man, as he proved to everyone last week by his constant incitement and his “shtick” of moving his office to the Sheikh Jarrah neighborhood in Jerusalem, in a contentious move designed to fan the flames of hatred and violence. This was a provocative act in which he and his followers were very successful, with the help of Israel’s police and winks from right-wing government ministers.  He and  his supporters, including the leader of the anti–everything group known as Lahava, (“Flame”–what a name!)  were out there last week, doing their utmost to instigate violence and destroy any sense of possible peaceful coexistence in Jerusalem.  Their constant incitement — both in the streets and in the media –were alarming reminders of just how anti-religious, anti-Jewish and anti-Zionist they and their extremist political party actually are. Ben Gvir does it with a cynical smirk — similar to the one that we have all too often witnessed in recent years on the face of our Crime Minister — and with a wink, which now signals that since he has been elected to the parliament, and has parliamentary immunity, he can now get away with all of his antics. In the past, he could have been arrested. Thanks to Bibi, this fanatic is actually a member of our parliament!

Hopefully a new government can be formed very soon which will not include this political party called “Religious Zionism”, which is a misnomer and a distortion of the truth. In a new unity government — to be led by Yair Lapid of Yesh Atid (“There is a Future”),  and Naftali Bennett of Yemina (“The New Right”) who now has the mandate to form the government, and others, including the first Reform rabbi in the Knesset, who is a member of the renewed Labor party — voices of authentic Judaism and Zionism will be heard once again in Israel. And they will represent Israel to the world. Among other things, if indeed such a government is formed—perhaps by the end of this week, according to media reports– they will repudiate the distortions of Judaism represented by these extreme right-wing parties, who should be beyond the pale in Israeli politics and certainly in our government. Instead, a government of change — without Netanyahu, without the ultra-orthodox political parties, and without these aforementioned extremist parties — will likely represent a relatively sane, sensible and sensitive version of both Judaism and Zionism.  But remember, everything is relative these days in Israeli political life.