After  warning  French Jewish organizations about anti-Semitic and anti-Zionist threats, they remained silent. The Police accepted a complaint for “materialized threat of crime against person committed because of race, ethnicity, nation or religion”.

Unfortunately, we are seeing more and more anti-Semitic and anti-Zionist publications on social networks. These publications are written by radical Islamists, the extreme left and right or by simple individuals who often follow the pack.

In October 2019, I wrote an article “The very dangerous drifts of the Yellow Vests” https://frblogs.timesofisrael.com/les-tres-dangereuses-derives-de-pseudo-gilets-jaunes/ in which I warned against Christophe Chalençon and his anti-Semitic and anti-Zionist remarks.

Since then, Mr. Chalençon has been much talked about, notably by the fact that he is under investigation after threatening Mr. Jacques Attali with death.

This same Chalençon, who has a grudge against all Zionists, attacked me several times in a few days on the VK network which is the Russian Facebook: https://vk.com/id662460118. 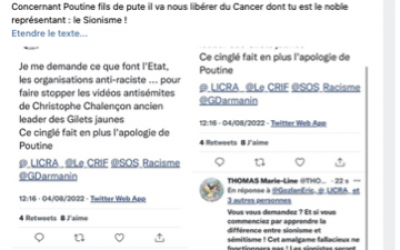 We can read: “The son of Zionist dog Eric Gozlan, certainly active element of Mossad

About Putin, son of a bitch, he will free us from the cancer of which you are the noblest representative: Zionism!

In this video you can hear :

Minute 26: “Zionists, get your tickets ready … Zionists have piloted the terrorist attacks. You will be put on a pitchfork; the people will dismember you in public. 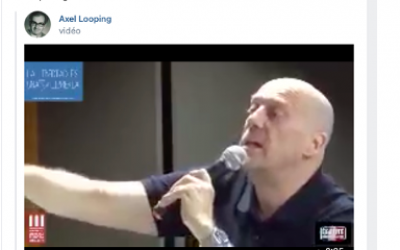 we can read: So that the big Gozlan succeeds in having an erection before falling asleep”.

(He presents a video of Soral, an already convicted anti-Semitism) 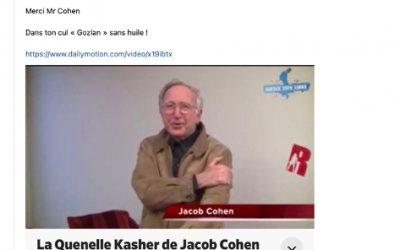 We can read: “in your ass Gozlan and without oil “

You can hear in this video :

From minute 28: “ Big Zionist pig ….When I said he should take a ticket to Israel…. Hurry up”

From 1.00: “I propose to be the executioner of these nice Zionists”.

From 1.09: “Death penalty for these felons ….. These individuals must be executed and put in a mass grave”.

The non-reaction of Jewish organizations

If many politicians, journalists, lawyers, friends, Christian, Muslim  and Jews have given me their support after Christophe Chalençon’s threats, I am astonished by the abyssal silence of French Jewish organizations. Thus, the CRIF (Representative Council of Jewish Institutions of France ), the Consistory, the Liberals, the Service for the Protection of the Jewish Community (to whom I sent 3 reports and they called me after 6 days) remained silent.

Why such silence from these organizations that claim to fight against anti-Semitism?

The respondent is not a Muslim so they say nothing?

I am known as a left-wing person?

They are on vacation? (I sent more than 150 messages, including to many leaders of those organizations)

Fortunately, the Police understood the danger of Chalençon and accepted to receive a complaint for: “Threatening a person with a crime committed because of his race, ethnicity, nation or religion” and “Public insult against a person because of his race, religion or origin by word, image, writing or means of communication by electronic means”