The Blogs
Shlomo Alegra
Apply for a Blog
Please note that the posts on The Blogs are contributed by third parties. The opinions, facts and any media content in them are presented solely by the authors, and neither The Times of Israel nor its partners assume any responsibility for them. Please contact us in case of abuse. In case of abuse,
Report this post. 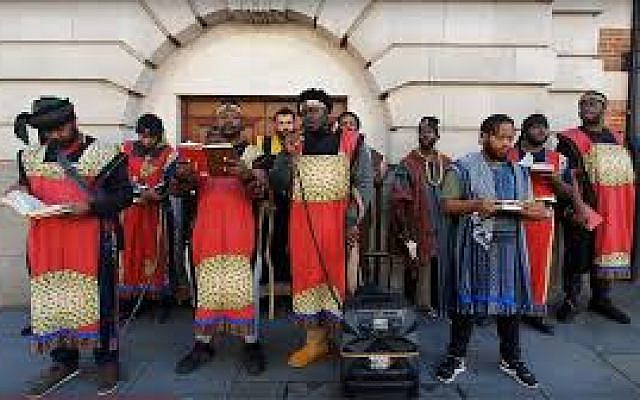 Jewish Immigrants arriving in the United States in the beginning of the twentieth century faced discrimination.

Jews were not allowed to apply to certain universities, were not respected when they asked not to work on Saturdays, forbidden from patronizing certain businesses, forbidden from living in certain areas and assaulted by Anti-Semitic gangs.

Jews were considered another race of people instead of white as they are seen today.

1913 Leo Frank a Jew living in Georgia was wrongly accused of rape and murder of Mary Phagan.

1915 An angry mob of Anti-Semites broke into the prison Leo Frank was being held and lynched him.

Discrimination against Jews in the United States forced many Jews to sympathize with African Americans.

During the Civil Rights movements many White Americans who were involved in civil disobedience like the Freedom Rides were Jews.

Many Jewish attorneys worked with the NAACP to defend African Americans in court and helped push forward with lawsuits in the Supreme Court to reverse discrimination laws.

Jack Greenberg was a prominent Jewish Attorney who was involved with Thurgood Marshall to help argue Brown V. Board of Education.

As Jews became more accepted in American Society after the Holocaust and started to pass off as white and the social economic status of Jews changed.

Religious Jews left behind in neighborhoods like Brownsville, Brooklyn began to experience strife between Jews and their Black neighbors.

African Americans began to look at Jews as their tyrant land owners or the annoying shopkeepers.

Following the assassination of Martin Luther King; there was a rise of the Black Panthers and Nation of Islam which began to spread Anti-Semitism into the Black Community.

Farrakhan accused Jews of being money hungry people who used African Americans as slaves to profit their businesses.

After an African American child was accidently run over by a Jewish man there were false accusations that the Jewish ambulance refused to help the child because he was black.

African Americans were shouting Hail Hitler, attacking Jews on the street, and rioting that many Jewish residents of Crown Heights described it as a pogrom.

Reverend Al Sharpton only fueled the fire by calling Jews diamond dealers and years later admitted that he caused more harm than good.

Lemrick Nelson Jr. stabbing Yankel Rosenbaum only fueled the flames further after he was acquitted in a court of law for the stabbing.

Fellow African Americans were cheering outside of  the courtroom when Nelson was acquitted of the stabbing.

Years later Lemrick admitted to stabbing Rosenbaum and did not face any sort of justice.

Over the following decades there have been a consistent growth among Blacks with Anti-Semitics attitudes.

In the early-nineties many African American leaders started to accuse Jews of being involved in the slave trade and asked for reparations.

Albany speech of Leonard Jefferies on the six minutes into the video he begins to spout his Anti-Semitic theory of Jews controlling the media.

Black scholar Leonard Jefferies during a speech 1991 accused rich Jews of working with the Italian Mafia to bring in slaves from Africa and accused Jews of controlling the media to put African Americans in a bad light.

“In 1993, Nation of Islam spokesman Khalid Abdul Muhammad delivered a caustic speech to Black students at Kean College in New Jersey, accusing Jews of not only controlling the transatlantic slave trade, but also being its main “beneficiaries.” He also claimed that Jewish support for the struggle for civil rights could only be driven by Jewish self-interest, and that Jews controlled much of American society, including the media, the Federal Reserve, the presidency and Black political leaders. Concern mounted from the Anti-Defamation League (ADL) and other groups over whether college campuses were now becoming hotbeds of Black anti-Semitism.”

For almost 30 years well known Black leaders in high positions have been spouting hate and influencing their audience.

Impact of hate speech against Jews have influenced many African Americans beliefs which is why many polls have found Anti-Semitic attitudes prevalent among Black Americans.

Incidents of African Americans attacking Jews in broad daylight have been recorded by passersbies.

Videos such as the one above have gone viral when a Jewish man accuses a Black woman of Anti-Semitism for saying Jews get preferential treatment.

The Black woman in the video accuses Jews of treating Blacks terribly in their own community and refusing to rent to them.

Arrival of the Authorities minutes later shows the video of the African American woman still verbally assaulting the man and woman for being Jewish.

According to the Jewish Data Bank:

Black Hebrew Israelites have became popular among  African American population and their Anti-Semitic views have been influencing them.

Last two serious murders in the US directed against Jews were perpetrated by African Americans.

April 27, 2019 a Black couple affiliated with the Black Hebrew Israelites murdered a young Jewish couple in their own shop with a plan to massacre the Jewish school next door.

There were Black residents who were interviewed after the shooting blaming the victims for what happened.

Following the day of the shooting the Wall Street Journal reported:

“Two shooters who killed four people in an hours long rampage here supported anti-Semitic groups online and are the lead suspects in the recent murder of an Uber driver, officials said, adding new twists to a crime that shook a city that publicly heralds welcoming immigrants and diversity. The assailants, David Anderson and Francine Graham, were killed during a shootout with police Tuesday after storming a Jewish grocery store located in the heart of a budding Hasidic community, according to New Jersey Attorney General Gurbir Grewal.”

According to the NJ.com, ” I do this because my creator makes me do this and I hate who he hates,” law enforcement sources told the New York Post, and later confirmed by others close to the investigation.”

Perpetrators were deeply steeped in Black Hebrew Israelite ideology and it shows in the letter one of them left how they view the Jews as white devils who control the world.

Another incident occurred on December 29th, 2019 in Monsey, New York during a Chanukah party in the home of a rabbi were an African American man full of hate against Jews drove over two hours to stab Jews.

Perpetrator of the stabbing managed to stab one person to death and injure three others.

“According to the FBI, the suspect, Grafton E. Thomas, 37, appears to have been driven by anti-Semitism. The FBI cited journals written by Thomas and his Internet search history, which allegedly reveal a pattern of hateful, anti-Semitic leanings.”

Once seen only in New York City, today Black Hebrew Israelites have expanded across the country.

Comedian Nick Canon was fired from hosting a television show after he expressed Anti-Semitic views on his podcast.

“Throughout the interview, Cannon engages in anti-Semitic conspiracy theories, asking why “we give so much power to the ‘theys,’ and ‘theys’ turn into illuminati, the Zionists, the Rothschilds,” — referring to the wealthy Jewish family often used as a dog whistle for anti-Semitism.”

Cannon’s views are no different than many Nazi and Klan members who also believe the Jews run the world with an iron fist.

Popular rapper and actor Ice Cube posted on his Twitter, ” The Honorable Louis Farrakhan continues to warn America to this very second and he’s labeled one of your “evil names” and you turn your ears off. Why is the truth so offensive that you can’t stand to hear it?”

Louis Farrakhan who has a long history of spouting Anti-Semitism.

Being supported by Ice Cube after he was banned from Twitter for his Anti-Semitic rants.

Rapper Snoop Dogg also supported Louis Farrakhan and showed his support on social media for the preacher of hate.

“Farrakhan was booted from the social media site, along with other controversial figures including InfoWars pundit Alex Jones, Laura Loomer, Milo Yiannopoulos and Paul Joseph Watson. Farrakhan has a history of making anti-Semitic comments, having called Hitler a “great man” in the 1980s and, more recently, accusing Jewish people of being involved in the September 11th terrorist attacks. ” If you’re down with it like I’m down with it, post your favorite Mr. Farrakhan videos on your Instagram and Facebook page,” Snoop Dogg said in an Instagram video on Thursday evening.”

Calling Hitler a great man and saying Jews were behind the September eleventh attacks are examples of the kind of hate African Americans are being taught.

Snoop Dogg, Nick Canon and Ice Cube have millions of fans across America who have been indoctrinated by their views.

The Video above filmed in 2014 shows how African Americans living in Crown Heights speak about how they believe in the book of the Protocols of the Elders of Zion and how Jews get preferential treatment over them.

Attitudes such as these will only continue to grow in the African American population in the future and more Anti-Semitic attacks will be perpetuated by African Americans.

Before World War Two many non-Jewish neighbors in Europe held the same sort of views before the Holocaust.

Experts studying the issue of Anti-Semitism in the African American population have equated Black Hebrew Israelites as the black version of the Ku Klux Klan.

“A white supremacist leader, Tom Metzger, once said of extremist Hebrew Israelites, “They’re the black counterparts of us,” according to the Southern Poverty Law Center.”

Organizations like the Southern Poverty Law Center and the Anti-Defamation League have reported that the Black Hebrew Israelites are becoming more militant.
The Southern Poverty Law Center reported:
“Zacharyah ben Ya’aqov, a former racist Hebrew Israelite who was active in the movement in the 1990s, calls the activities of camps “evangelical terrorizing.” Ya’aqov, who now heads the Israelite group, The Truth After Knowledge, denounces his former community’s racist doctrines. He describes on his group’s website his experiences as a rank-and-file member, explaining that his superiors brainwashed new recruits, using “fear tactics to break you down,” and instructed followers to join camps and verbally assault pedestrians.”
Hate groups becoming more militant usually lead to more hate crimes being committed by their own members or people inspired by their message.
It is not beyond the imagination to see in the future that many Anti-Semitic attacks will come from the Black Hebrew Israelites.
About the Author
Shlomo was born in Miami, Florida in 1989 and moved to Israel in 2012. He holds a degree from Florida Atlantic University in Political Science and served in the IDF as a combat soldier in the Netzach Yehuda Battalion. After serving in the military Shlomo studied in Yeshivat Shavie Hevron where he lived in Hebron. He now lives in Kiryat Arba, is a proud reservist in the Golani Brigade, and is a blogger for the Times of Israel.
Comments