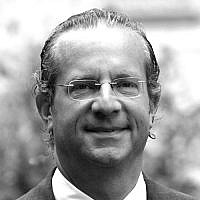 The Blogs
Mitchell Feierstein
Fund Manager and Author
Apply for a Blog
Advertisement
Please note that the posts on The Blogs are contributed by third parties. The opinions, facts and any media content in them are presented solely by the authors, and neither The Times of Israel nor its partners assume any responsibility for them. Please contact us in case of abuse. In case of abuse,
Report this post.

Another of Omar’s anti-Semitic tropes from a few weeks ago instructs people to “follow the Benjamin’s” and implies that Jews and Jewish money control global finance, foreign governments, the media and U.S. Congress. Omar’s repugnant stereotype revisits the age-old false narrative of Jewish people being Shylocks—a stereotype that dates to Shakespearian times. Clearly, Omar’s comments seek to delegitimize Jewish participation in the American political  process by implying Jewish sympathies are sold to the highest bidder. Omar’s tropes imply that friends of Israel are agenda driven and that their loyalties are purchased and funded by Jewish money.

Omar’s hateful rhetoric is troubling and establishes a long-standing pattern of behavior on her part:

“Israel has hypnotized the world, may Allah awaken the people and help them see the evil doings of Israel. #Gaza #Palestine #Israel — Ilhan Omar November 16, 2012.

Members of the Democratic leadership have denounced Omar’s comments, calling her comments  “hateful, hurtful, vile, and anti-Semitic.” Omar’s consistent pattern of behavior expressing anti-Semitic sentiments should raise red flags on many levels, yet during a press conference, Speaker Pelosi mollycoddled this member by giggling while stating “When you cross that threshold into Congress, your words weigh much more than when you are shouting at somebody outside.” This is not funny.

Progressive Democratic presidential candidates all weighed in to flaunt their extreme liberal-left “bona fides.” Accordingly, Kamala Harris, Bernie Sanders, Elizabeth Warren, and Kristen Gillibrand all jumped on the justification/rationalization bandwagon by springing to defend Omar’s pattern of  spreading anti-Semitic tropes—tropes that demonstrate Omar’s attitude and viewpoints towards Israel and Judaism rather than just her “making a simple mistake.”

As bipartisan outrage towards Omar spreads, pandering politicians such as Kamala Harris and Alexandria Ocasio-Cortez “AOC” attempt to revise history by painting the anti-Semitic Omar as a “victim” of a vicious smear campaign funded by Jews and spread by Trump supporters and the GOP.

“I am told every day that I am anti-American if I am not pro-Israel. I find that to be problematic and I am not alone. I just happen to be willing to speak up on it and open myself to attacks” – Ilhan Omar March 3, 2019

Has Speaker Pelosi’s fear of the off-the-rail Democratic “progressives” such as Rashida Tlaib or the self-proclaimed “boss” of the Democratic Party, Representative Alexandria Ocasio-Cortez, influenced and prevented the speaker from condemning Omar’s repeated anti-Semitic comments?

Speaker Pelosi’s actions muddied the waters and diluted the original issue of anti-Semitism by broadening the resolution to include all forms of discrimination. Specifically, refusing to sanction Omar’s anti-Semitic comments serves to enable and embolden anti-Semitism and anti-Semitic behaviors.

Most importantly, Omar’s hateful rhetoric and Jewish bigotry have no place in America and these comments are especially dangerous when uttered by a sitting member of the Foreign Affairs Committee in the US House Of Representatives. To be clear, the Foreign Affairs Committee is the Congressional committee that has jurisdiction over the American-Israel relationship. Israel is one of the United States strongest allies and its only democratic ally in the Middle East. This relationship has been and must be protected without fail—now and forever.

Ms. Pelosi’s attempts to cover up Omar’s multitude of anti-Semitic tropes lack all credibility. One may ask: Speaker Pelosi, if Omar lacks experience, why would you choose to seat Omar on the Foreign Affairs Committee? How can serious rational discussions regarding foreign policy be possible when a sitting committee member spews bigoted stereotypes demeaning the Jewish faith? The Speaker’s dismissive comments minimize anti-Semitism, diffuse the issue at question, are extremely concerning, and allow anti-Semitism to have a place in the progressive wing of the “New Democratic Party.”

If the Democratic Party were serious about condemning anti-Semitism, not only would the party condemn Ilhan Omar, but they would also condemn members supportive of the Nation of Islam’s Louis Farrakhan and Linda Sarsour for their hateful, offensive Jewish bigotry.

To be clear, delegitimizing Jewish people as inhuman has been commonly used against Jews for centuries, and Omar’s comments are no different. They are offensive and dangerous. When Omar was forced to apologize, Omar simply issued a non-apology apology by rewording the same slur a different way.

If you are Jewish and a member of today’s Democratic Party, be aware of how the new wave of radical, far-left, extremist “Progressives” denounce Israel and support Omar’s anti-Jewish bigotry in the form of dangerous stereotypes and rhetoric supportive of an era we all hoped had long passed. Just realize that both you and Israel are now the targets of this progressive “New Democratic Party.”

Mitch Feierstein is CEO of Glacier Environmental Fund and author of Planet Ponzi: How Politicians and Bankers Stole Your Future.

About the Author
Mitch Feierstein knows the financial industry inside out. For the past 38 years, he consistently created opportunity and value where others have failed to look. He is a successful hedge-fund manager and CEO of the Glacier Environmental Fund Limited. Prior to Glacier he was Senior Portfolio Manager of the Cheyne Carbon Fund, part of one of the largest and best-respected hedge-fund groups operating in Europe. He has acted as a consultant for a number of governments in their disaster and contingency planning. He is the author of Planet Ponzi the only insiders account of the credit crisis detailing; How we got into the mess, what happens next, and what you need to do to protect yourself. He divides his time between London and New York.
Related Topics
Related Posts
Comments