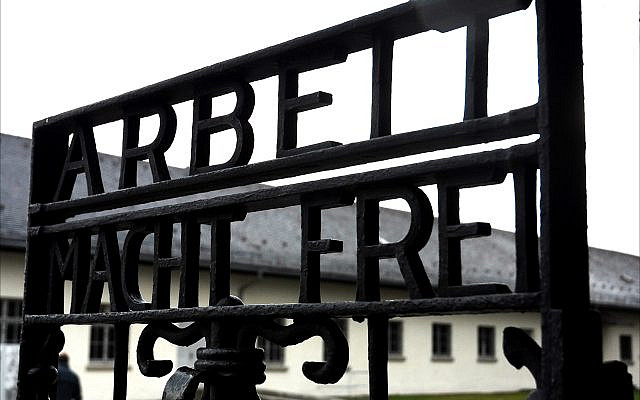 "Work sets you free," reads this sign at the entrance to Germany's Dachau concentration camp, where an estimated 41,500 Jews and others were killed between 1933 and 1945. (Larry Luxner)

Anti-Jewish hate and violence—long a scourge of Europe—is once again on the increase, as the coronavirus pandemic continues to take a bruising toll on economies from Belgium to Bulgaria.

Yet in the wake of neo-Nazi conspiracy theories and online Holocaust denial, the land that nurtured and gave rise to Adolf Hitler has a special responsibility to stem this rising tide of hatred, argues Emily Haber, Germany’s ambassador to the United States.

Haber, who assumed her post in June 2018, spoke during an April 12 webinar hosted by Michael Brenner, director of American University’s Center for Israel Studies. Among other things, Brenner is a professor of Jewish history at Munich’s Ludwig-Maximilians University and international president of the Leo Baeck Institute for the Study of German-Jewish History.

Haber warned that, despite her government’s efforts, anti-Semitism is increasing in Germany— where authorities logged at least 2,275 hate crimes against the country’s estimated 120,000 Jews last year (including 55 acts of violence). That’s up from 1,799 such crimes recorded in 2018 and 2,032 in 2019. Nevertheless, authorities detained only five suspects last year, and no arrest warrants were issued. 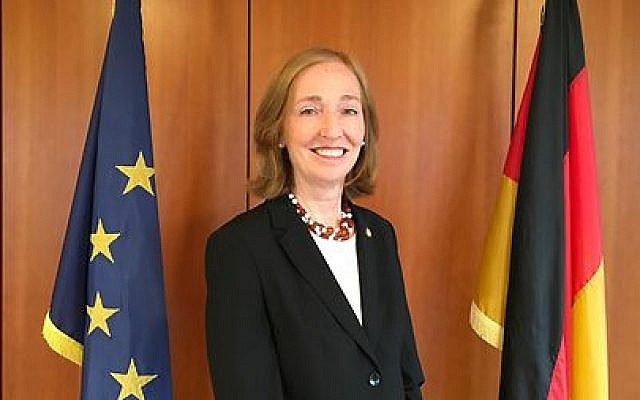 “Obviously, if anti-Semitic discourse is inching toward the mainstream, then we will have to have a very big toolbox in order to confront it,” Haber said. “And if you want to confront it, we must work together internationally.”

In the first two months of 2020 alone, the president of the Jewish community of Graz, Austria, was attacked with a wooden club; in France, anti-Semitic graffiti reading “Heil Hitler” and “Juden” was painted on a Jewish home in Lyon; a Jewish man was called a “dirty Jew” and beaten unconscious in a Paris elevator; a visibly Jewish man was stabbed in London; a Jewish cemetery in the city of Hamina, Finland, was vandalized, as was a kosher restaurant in Amsterdam, and the Jewish community center in the Ukrainian city of Kherson was firebombed.

Haber said she’s “not very comfortable” when scholars hold her country up as an example of how to come to terms with an evil past.

“There’s a general sense that Germany has done a lot to confront its Nazi past and crimes against humanity, to atone to the extent that is even possible,” the ambassador said in reference to Hitler’s extermination of six million Jews between 1933 and 1945. “But there is no template for confronting one’s history. And I would be wary of recommending any template.” 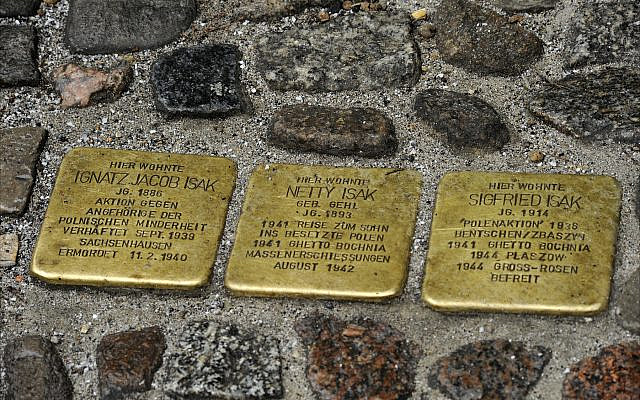 Anti-Jewish attacks on rise here, too

Furthermore, a national recognition of Nazi Germany’s crimes came about gradually and unevenly, she said.

“Even in comparing eastern and western Germany, both countries had very different cultures. In eastern Germany, for example, it felt that it had no link, no direct responsibility for Nazi crimes outside of traditional anti-fascism,” she said. “Confronting that history began only after 1989 [with the fall of the Berlin Wall and Germany’s subsequent reunification]. This is something that takes place over a long time, and it constantly changes.”

The online event at which Haber spoke is part of an ongoing lecture series by AU’s Center for Israel Studies titled “Anti-Semitism Since the Holocaust: America, Israel and Europe.” Other speakers in the series have included French Rabbi Delphine Horvilleur, author of Anti-Semitism Revisited: How the Rabbis Made Sense of Hatred; University of Chicago history professor David Nirenberg, author of Anti-Judaism: The Western Tradition, and Annie Polland, executive director of the American Jewish Historical Society.

It came only four days after Yom HaShoah—Israel’s annual Holocaust Memorial Day—and in the midst of a dramatic uptick in violent attacks against Jews not only in Europe but in the United States as well. According to a March 2021 pollby the Anti-Defamation League, 63% of respondents had either experienced or heard anti-Semitic comments, slurs or threats in the previous five years, a 54% increase from the 2020 survey. 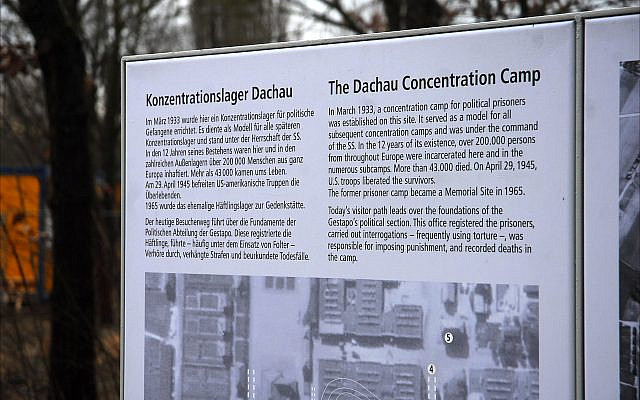 More alarmingly, 9% of Jewish Americans indicated in the survey that they had been physically attacked in the last five years because they are Jews, up slightly from the previous poll.

“In the aftermath of major antisemitic attacks in Pittsburgh, Poway, Jersey City and Monsey, American Jews are reporting that they feel less safe in the US today than they were just a decade earlier,” said the organization’s CEO, Jonathan Greenblatt. “Looking back on the past five years, which were bookended by the anti-Semitism in Charlottesville in 2017 and the hateful symbols on display during the breach of the US Capitol on Jan. 6, it is understandable that the level of anxiety is rising and concerns about communal safety are on everyone’s minds.”

Before coming to Washington, Haber—the first woman ever to represent Germany as ambassador to the United States—held a number of high-level positions. From 2014 to 2018, she was state secretary in charge of homeland security and migration policy during the height of Europe’s immigration crisis.

Haber also served in various posts at the German Embassy in Moscow. She headed both the German Federal Foreign Office’s OSCE division and was its deputy director-general for the Western Balkans. 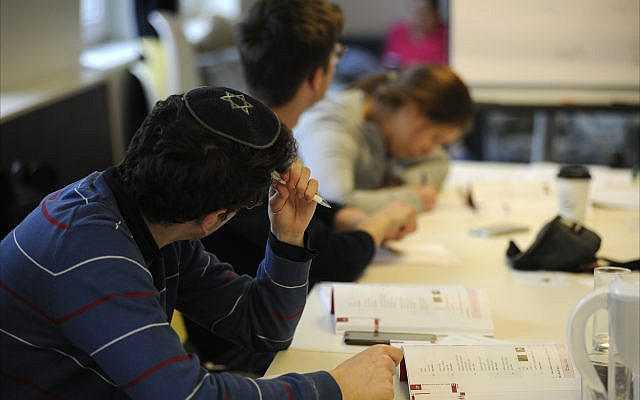 Brenner, in asking Haber to explain the anti-Semitism currently sweeping Europe, noted that “having grown up within the Jewish community in Germany and lived there for many decades, I myself did not expect that we would sit here in 2021 and discuss attacks on synagogues, attacks on people or Jewish symbols in the streets.”

The answer, she suggested, is the “globalization and hyper-connectedness of our time, which to some extent makes states and countries and governments less capable of delivering on issues or expectations.” Haber said saw that personally during the migration crisis, which led to grievances and resentment—an ideal breeding ground for extremist views and hate speech. 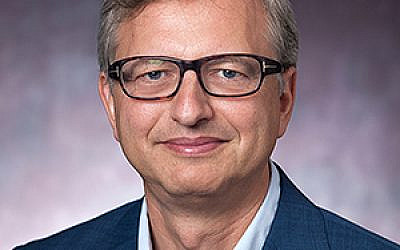 Twenty years ago, she noted, the world’s media outlets were supervised by experienced journalists and editors who knew the difference between news and propaganda.

“Today, we live in a world where everyone can be a producer of information. And we see in our social media the tendency of attention spans which are economically defined. That’s dangerous, because it’s happening in democratic societies,” Haber said. “So the Internet—the very system that held the promise of democratic empowerment—actually leads to fragmentation, pushing people to more extreme views. will push people ever, nudge them to ever more extreme views.”

The rapid spread of COVID-19—which has killed more than a million Europeans—has only fueled anti-Jewish conspiracies. These range from blaming Jews for the virus itself, to accusing them of harvesting the organs of Christian victims, and profiting from the development of vaccines to prevent the disease. Frequent targets of their vicious campaigns include Hungarian-American billionaire George Soros, the Rothschild family and ultra-Orthodox Jews in general. 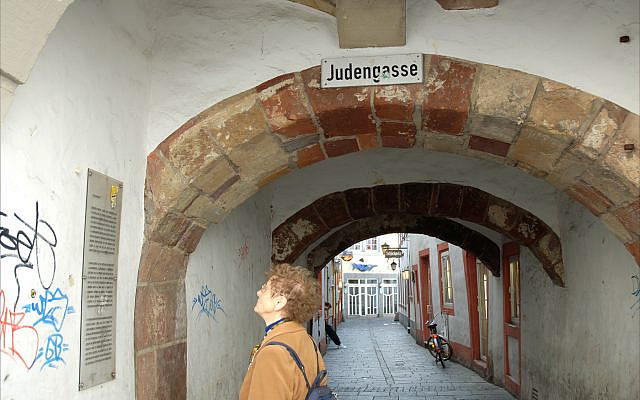 “Anti-Jewish hatred online never stays online,” Moshe Kantor, president of the European Jewish Congress, told the Associated Press last week. “We have to be prepared that anti-Semitic conspiracy theories could lead to physical attacks on Jews when lockdowns end.”

Haber said that during its six-month rotating presidency of the EU, which ended in December 2020, her country attempted but failed to make Holocaust denial a crime throughout the bloc, punishable by a prison term of one to three years. Since 1985, denying the Holocaust or even making the “Heil Hitler” salute is a criminal offense in Germany. But Berlin’s efforts were blocked by various countries, as well as by 200 historians who argued that such an EU-wide law would infringe on free speech.

“At the end of our presidency, we established a consensus among all 27 member states on mainstreaming the fight against anti-Semitism. We also partnered with other international organizations, and set up a global force against Holocaust distortion,” Haber said, praising the 31-nation International Holocaust Remembrance Alliance, which has been fighting such false claims for more than 20 years.

“Whenever you see incidents occurring in one part of the world, it can instantly affect developments on other continents, and we have seen that during the pandemic,” she said, noting comparisons drawn by misguided protesters in Berlin, Stuttgart and elsewhere who wear yellow stars in an attempt to draw parallels between the Holocaust and their fears of forced vaccination against COVID-19.

The ambassador added: “Confronting the past is a long-term challenge, and it will never end.”