An eclectic crowd of people gathered outside Sydney Town Hall on Thursday evening to protest the visit to Australia of Israeli Prime Minister Benjamin Netanyahu.

As is usual at such events the crowd consisted of an assortment of people — bearded, angry-visaged men, women in hijabs, fair-haired twenty-somethings hawking ‘Socialist Alternative’ merchandise, and a small number of middle-aged matrons of European background.

The speakers included Greens state MP, David Shoebridge, state Labor MP Julia Finn, Randa Abdel-Fattah, among others. In the crowd were Greens Senator Lee Rhiannon and state Labor MP Shaoquett Moselmane. Shoebridge railed against “the State of Israel and the right-wing cabal of that state,” language that would have gladdened the hearts of antisemitic Jewish conspiracy theorists of all political hues.

The speeches were boring, repetitive and wholly predictable. “Israel must cease to exist. Israel is a racist occupier. The occupation must end. The Palestinian refugees must return to Israel. Israel must be eliminated. Support BDS.” Palestinian leaders and their uncritical supporters in the West have been stuck in this same old conceptual rut for 100 years, and their people have suffered the consequences.

One banner was large and had an image of Netanyahu with a Hitler moustache and the word “Fascist” written in both English and Hebrew. Another placard had Netanyahu in Nazi uniform giving the Nazi salute with a Nazi swastika flag as background. There were placards with “Stop the Gaza Holocaust”, “Stop the genocide”, and “This is not war. This is genocide”. There were several images of Netanyahu, one with “Child Killer” on his forehead, another with red devil horns protruding from his forehead, one with a devil’s tail and large red horns, and yet another “Netanyahu: modern-day Hitler”. A placard of an Israeli flag had the Jewish Star of David replaced with a Nazi swastika.

In their mindless hatred, the protesters compare the leader of a democracy which has had to defend its very existence from would-be genocidists for 70 years, with the perpetrator of history’s most infamous genocide, the murder of six million Jews. Oblivious to the repulsive way they appear to ordinary reasonable Australians, the protesters use images copied straight out of the pages of Der Sturmer to portray the State of the Jewish people and its democratically elected leader.

The antisemitism came right out into the open with one large placard bearing the words “Malcolm Turnbull is Jewish and a poodle for Bibi the war criminal. End the oppression!” referring to the Australian Prime Minister. Another placard said “End Zionism for Peace”. In the minds of these people every people in the world is entitled to the right of national self-determination – except the Jewish people.

The protesters marched around the city streets, under heavy police presence, much to the annoyance of city workers trying to get home at peak hour.

Back at the Town Hall, the evening ended with a young anti-Israel activist holding aloft a Hezbollah flag telling a TV journalist that one day the flag of Hezbollah will fly over the Knesset. Hezbollah is a Lebanese Shiíte organisation. It seems he forgot that the Palestinian Arabs are predominantly Sunni, not Shia. It might also come as a bit of a surprise to some that the Iranian-backed Shia army of Lebanon has its eye on taking over Jerusalem and Palestine and no doubt turning it into another armed base in the cause of Iranian hegemony in the Middle East – and beyond. 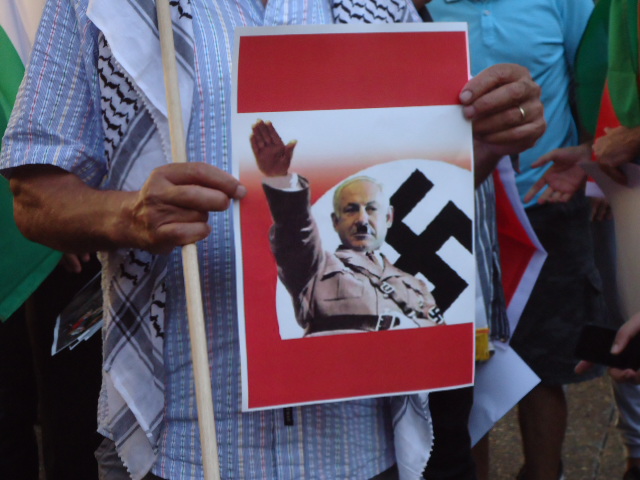 Placard at protest in Sydney on 23 February 2017