The Blogs
Paul Gross
Apply for a Blog
Please note that the posts on The Blogs are contributed by third parties. The opinions, facts and any media content in them are presented solely by the authors, and neither The Times of Israel nor its partners assume any responsibility for them. Please contact us in case of abuse. In case of abuse,
Report this post. 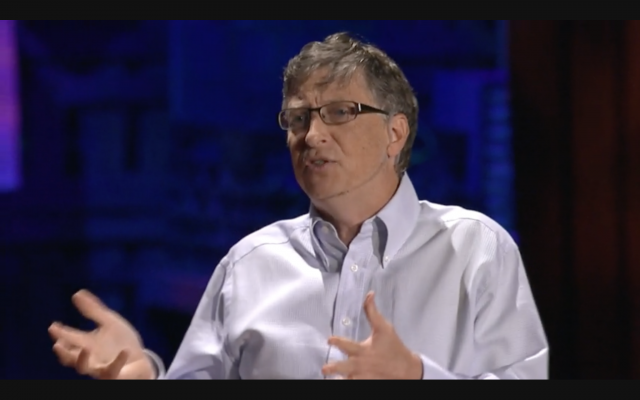 Bill Gates's 2010 TED Talk about his vision for the world's energy future became grist for conspiracy theorists. (Screenshot from video)

Today I got a fascinating and disturbing insight into how conspiracy theories work.

We had a handyman come over today to fix a few things in the house. A very friendly, amenable and reliable guy who I’d happily recommend for his professional skills – less so for his worldview, as it turns out. I walked in on a conversation he was having with my wife about what he was calling “a second Holocaust.” I naturally asked what he was talking about and he replied that the government would soon be making him wear a yellow star because he refuses to get a vaccine. I politely asked why he’s an anti-vaxxer.

In response, he recommended that I watch a short clip from a Bill Gates Ted Talk from a few years ago. Apparently in this clip, Gates uses the “excuse” of global warming to call for mass depopulation of the world… through (you guessed it) vaccines!

It’s possible I arched an eyebrow at this point.

“If Bill Gates was actually planning some kind of genocide, why would he announce it in a Ted Talk?” I asked. He shrugged. “Just watch it! It’ll change your mind I promise you!”

After he left, I decided I would search online and watch the incriminating video, mainly to satisfy my own curiosity. Turns out it was easy to find, as a number of conspiracy theory-types had posted a three-minute segment of this Ted Talk from 2010 entitled ‘Innovating to Zero’, in which he discussed ways the world could reduce carbon emissions. One way he suggested was by reducing population growth. Here’s what he said:

The world today has 6.8 billion people. That’s headed up to about nine billion. Now if we do a great job on new vaccines, health care, reproductive services, we lower that by perhaps 10 or 15 per cent.

Hmmm… that does sound odd, I thought. Reducing population growth through new vaccines and better healthcare? Still, my first thought was that there was something missing from my understanding, not that one of the world’s most famous philanthropists was using a public platform to advocate clinical mass murder.

So, I did some more research. It took me about two minutes on Google to solve the mystery. It turns out that one of the agendas of the Bill and Melinda Gates Foundation is paying for healthcare in African countries where child mortality is appallingly high. This healthcare naturally includes vaccines against diseases, which in the West we don’t even think about, but which kill millions of children in the developing world. And guess what? It turns out that one of the side effects of saving the lives of all these children is that African mothers have smaller families. Instead of the 10-15 children, they conceive because they assume half won’t make it to adolescence, they have four or five kids and then stop, secure in the knowledge that their immunized offspring will survive.

Mystery solved. But my handyman has not bothered to look for this simple (as it turns out) explanation. He’s deep in the morass of conspiracy theory. I just found his Facebook page and, guess what, the last few weeks of posts are either anti-vax or pro-Trump election fraud propaganda. I also found a 9/11 conspiracy video.

Invariably, it seems, conspiracy theorists buy into several at once. What all the theories have in common is that they blame powerful elites for perpetrating a terrible crime; these shadowy, unaccountable figures are singularly responsible for an unpleasant or undesirable event, which the lying media tells us has multiple and complex causes (a global pandemic say, or the Great Leader who has done wonders for the country somehow losing an election).

If Jews find this familiar it’s because it’s basically the history of antisemitism, which makes it all the more distressing that Jews should go along with it.

I saw today on this news site that the Israeli right-wing NGO Im Tirtzu is launching an initiative to “safeguard the integrity of the elections.” Using strikingly Trumpian language, the organization’s Facebook page declares: “This year, nobody will steal votes.” Also included is the demonization of the Central Elections Committee chairman and Supreme Court judge Uzi Vogelman by noting that he is an alumnus of the Wexner Foundation’s leadership program – absurdly a focus of Israeli right-wing conspiracy claims.

So no, Jews are not immune to this insanity, and neither is the Jewish state. And as with Trump in the US, we currently have a highly talented conspiracy king running the country. In this election campaign, we need to be on our guard. Anti-vaxxers could be the tip of the iceberg; we may get to see what an indigenous Israeli QAnon looks like, and who knows, if Bibi loses, maybe even our own ‘Capitol Hill’ insurrection.