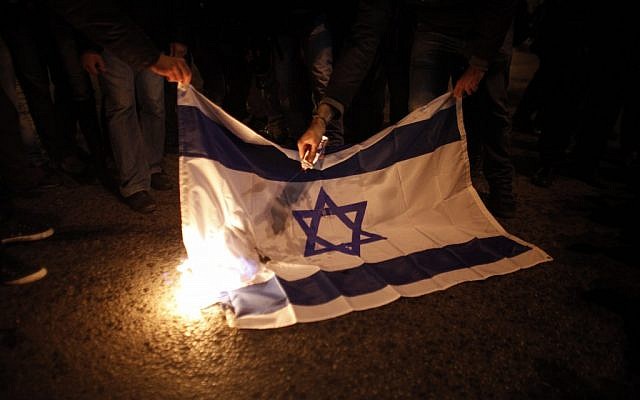 Illustrative: Protesters burn an Israeli flag during a protest against Israel's attacks of the Gaza Strip. (AP/Kostas Tsironis)

Recent years have seen a dramatic increase in anti-Semitism in Europe. In the United States, too, anti-Semitism is on the rise. In some cases, it comes in the familiar age-old guise of hatred of Jews, plain and simple; but in many others, it is cloaked in the form of the negation of Zionism, or in other words, the denial of Israel’s right to exist as a Jewish state.

In her recent New York Times article, “Anti-Zionism Isn’t the Same as Anti-Semitism,” Michelle Goldberg claims that the two are, in fact, very different stances. Using a convoluted argument, based on the historical opposition to Zionism among some Jews, and on the fact that Israel’s policies toward the Palestinians can make it hard for others to identify with the state, she tries to prove that it is possible to be anti-Zionist without necessarily being anti-Semitic. She argues that because Jews around the world have very different interests, which can sometimes clash with those of the State of Israel, then anti-Zionism is merely opposition to the Jewish state, and has nothing to do with one’s attitudes toward Jews per se. This argument is misleading, at best; a less generous analysis is that it willfully ignores the realities of anti-Zionism, and is prepared to leave it to the Jewish state to pay the price.

According to reports produced by various research institutes, the Israeli government, and Jewish organizations in Europe, the number of attacks on Jews is rising constantly, and the sense of personal security felt by Jews in major European countries is on the wane. In the United States, too, anti-Semitism is increasingly apparent. Contemporary European anti-Semitism includes both “traditional” European Jew hatred as well hatred directed at Zionism and the State of Israel, including calls for Israel’s destruction. Thus, at various demonstrations, events, and anti-Semitic incidents, “traditional” expressions of hatred against Jews can be heard alongside the vilification of Zionism and the Jewish state.

The conflation of anti-Zionism with anti-Semitism is also evident, in most cases, among those who are most vocally anti-Israel and anti-Jewish. In Europe, a great many of these are Muslim immigrants who fully identify Israel with the Jews in general, and for whom the goals of the destruction of Israel and the destruction of the Jewish people are indivisible. Others belong to the radical European left, which opposes Israel and Zionism almost as a matter of tradition. On the extreme right in Europe, as well, there are those who lump together the Jewish people and the State of Israel, and call for the Zionist project to be terminated.

But in truth, one needs nothing more than common sense and a basic familiarity with recent history to understand that anti-Zionism is a clear display of anti-Semitism. At the heart of the Zionist undertaking was the establishment of a Jewish state in the Land of Israel. Since this was achieved, the Jewish state has become the strongest and most visible expression of the existence of the Jewish people, and of Jewish existence in general.

Anti-Zionism, in turn, is the demand to erase the Jewish character of the State of Israel. The most immediate practical outcome of this would be that the State of Israel, in its current incarnation, would cease to exist. In the first stage, it would become, as the fiercest critics of Israel hope, “a state of all its citizens,” with no special Jewish component, and with no possibility of maintaining a Jewish majority. Such a state would, in effect, offer the right of return to Palestinian refugees. With the removal of the Jewish majority, one can safely assume, Jews would no longer be able to reside in such a state. The Jewish national home would be destroyed, and the only sure refuge for Jews in the world would be gone. While it is true that the interests of Jews around the world are not identical with those of Israel, it should be remembered that the existence of the Jewish state as a refuge for any Jews in need, wherever they may be, is very much in the interests of every Jew in every country.

Undeniably, everyone — Jew and non-Jew alike — has the right to criticize the State of Israel and its policies. Certainly, there is no reason why such criticism should not be fierce and even savage. But when it crosses the line into anti-Zionism — meaning, the denial of the right to exist for Zionism and the Jewish state — then it becomes nothing more than a dangerous form of anti-Semitism.