Anyone here like Yoga?  Me, too.  So, last Monday, I headed to a Yoga class, knowing it would be a bit risky.  Not the class, but Sharon was driving our 1999 Toyota.

You see our Camry had already broken down the previous week and I resurrected it (not always a word you expect to hear in shul!) with more oil.

I was told by the mechanic that we could probably squeeze another week or two out of the car.  This was day six.

I went to the class hoping all would be fine, but just in case I left my phone on.  Class proceeded smoothly until, just as I was getting into Warrior pose, my phone began vibrating.

The Camry had stopped – this time at the intersection of Bedford Street and Worthen Road, in the left-turn lane – not a good place.

Sharon waited a long time for AAA, finally, leaving to see her clients.

I anxiously anticipated a call from the garage that our car had arrived.  It never did.  Finally, five hours later, AAA reported that they had picked up the car and towed it to the garage.  (Thanks to Joe Nissenbaum and Nissenbaum’s Used Auto Parts the car is becoming a donation to the shul – something we can all do with cars that no longer run.)

This morning, I want to speak to the moment of uncertainty – it can be waiting for your car to stop working or to be towed.

It can be a more positive moment like counting down the days until your bar mitzvah or until the birth of a new child.

I remember the anticipation I would feel at this time of year as I would count down the days at the end of the school year, until summer vacation. 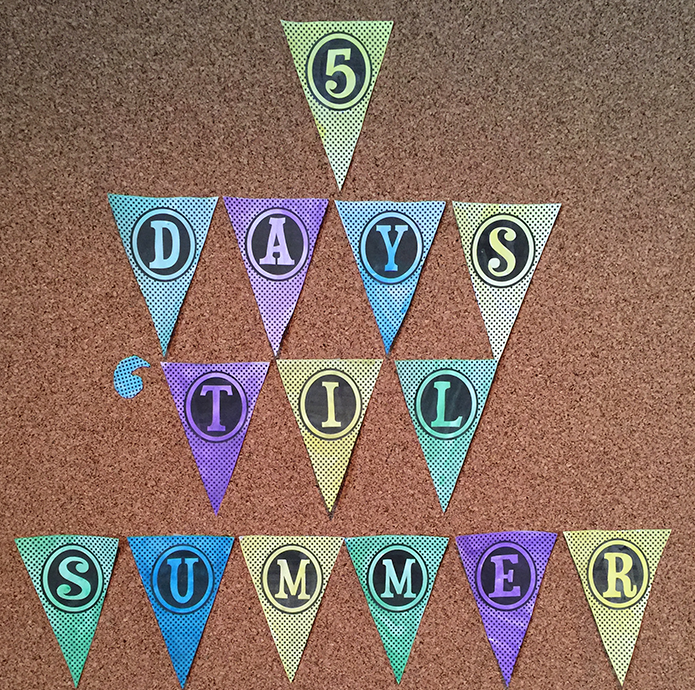 Anticipation is a major part of our tradition.  Our rabbis knew that not only are we able to sanctify moments in time like Shabbat and hagim – our holidays, but even the moments leading up to them can become more special.

For example, traditionally, each weekday has some action preparing for Shabbat – On Sunday, you might think about your Shabbat plans; on Monday, you might invite someone over for dinner; on Tuesday, make your shopping list and on Wednesday, buy the food, cooking on Thursday and cleaning on Friday – filling each day with excitement and anticipation building into Shabbat.

Usually, the bigger the moment, the greater the anticipation.  If it’s your Bar-Mitzvah, you have been practicing and learning for a year!  That’s real commitment… and real excitement!

Sometimes, people prepare for a wedding for an even longer time that can include an engagement, an engagement party, a bridal shower, an aufruf aliyah on a Shabbat before the wedding, going to the mikveh to immerse on the night before and then the actual wedding itself.

Some couples deliberately try not to see each other for a few days or a week before the wedding.  While this was logistically complicated for me and Sharon 20 years ago, I also remember how much it added to our sense of anticipation… and then our joy when we finally saw each other at the wedding. 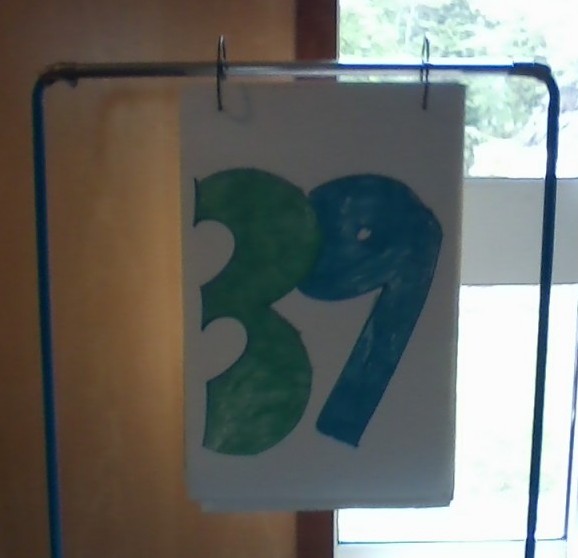 We are currently in an anticipatory count-down mode or to be more accurate, counting up mode as we count the days of the Omer.

Today is day 39 as you can see from our jumbo Omer-counter!

The Omer is a fascinating mitzvah, and a relatively obscure part of the tradition.  It goes back thousands of years to a time when most Israelites were farmers, commanded by the Torah to bring an omer (a unit of measure) of barley as a sacrifice in the Beit Hamikdash – the Holy Temple in Jerusalem.

Well, let’s get into the agricultural mindset of thousands of years ago.  Most food is grown and harvested.  There are no super-markets, canned goods, Costco, or convenience stores.  Each year, people rely upon the rain to fall and the crops to grow to survive.  That’s hard for us to appreciate in the modern U.S.

But this still occurs in many parts of the planet.  Many places in Africa are vulnerable to crop-failure and droughts.

Sadly, we know that the impact we are making on the planet will make this even more likely in the future.

I’m sure some of us remember the book The Long Winter from the Little House on the Prairie series. Think about how the Ingalls family barely survived that harsh winter with little fuel and little food. 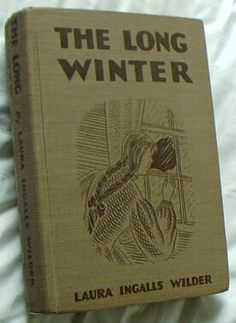 Similarly, the Israelites were dependent on nature.  Was there enough rain in the rainy season so the crops would grow and was there enough to drink?

As they approached the festival of Shavuot – when they would bring their first-fruits to the Temple in Jerusalem, they were unsure what they would have.

Would they have enough?

This ritual of bringing an omer-measure of barley may have served to assuage their fear – it gave them a measure of control in a situation that they did not control.

In many places in our lives, our tradition strives to help us cope with uncertainty, with anxiety to move us to a place of hopeful anticipation.

The rabbis gently reframed the Omer from revolving solely around nature to leading to Shavuot and receiving God’s revelation at Sinai, about learning Torah.

That subtle addition of Sinai to Shavuot meant that a season of worry was transformed into a season of hope.

Over the millennia, the Omer went through other transformations which I will leave for another sermon, but the core remains.

We take a time of anxiety and transform it into a time of eager anticipation.  That is about how we frame a moment, how we are open to a moment, how we do not let fear overwhelm us.  Our rituals help us manage those emotions, hopefully centering us and allowing us to be truly present.

We currently live in a world that contains measures of uncertainty that lead to anxiety.  The policies proposed by the current administration and the crises in Washington have left us unsure of what will happen.

We live on a planet that is rapidly warming.  And we live in a world that still suffers from hate and intolerance.

A couple of weeks ago there was an act of hate at Lexington High School during the performance of Rags – a play that some of our students were involved in – about the Jewish immigrant experience.  A swastika was drawn in a bathroom along with hateful words.

As Jews who live with the echoes of the Shoah, of the Holocaust, these incidents impact us.

They raise fears and anxiety.

We need to know how to respond to such incidents.  In Lexington, there is a Human Rights Committee, which, along with LlCA – the Lexington Interfaith Clergy Association, helped us respond appropriately when the Westboro Baptist Church – a hate group – came to visit back in 2005 and 2009.

Hopefully, in the coming weeks, we will hold a communal response that will help us heal.  But the most encouraging signs have come from my fellow non-Jewish clergy who have reached out with words of support.

Father Paul Garrity of the Catholic Communities of Lexington will present his thoughts to his community tomorrow and I want to share some of his words which he already shared with me:

“As Christians, it is very difficult for most of us to get inside of the Jewish experience of the holocaust and to know first-hand what it is like to be the object of another person’s religious prejudice and hatred. This is also made more difficult because of the complicity of Christians over many centuries in the persecution of our Jewish brothers and sisters. Through ignorance, for centuries many Christians misread the Bible and ignored the fact that Jesus was Jewish and that our Christian faith is rooted deeply in the Hebrew Scriptures.

“We should keep all this in mind when we reflect upon the predicaments of refugees and immigrants today. For the most part, Muslims of every nationality are God fearing, peace loving people. How awful must it be for Muslims in this country to hear talk about a Muslim ban! Even talking about keeping Muslims out of our country sets a tone and sends a message that it is okay to discriminate against certain people based on their religion….we should not put our heads in the sand when we realize that some of our current political dialogue is fomenting a rising tide of anti-Semitic, anti-Muslim, and anti-immigrant fervor.

“Whenever we even seem to condone prejudice, we should remember the advice of 20th century philosopher George Santayana: ‘Those who do not remember the past are condemned to repeat it.’  We are all God’s children. The sooner we all begin to act this way, the sooner will the world we live in become a welcoming world for all.”

Can you imagine what impact words like these coming from a Catholic leader on the eve of the Shoah might have had?

This reminds us of how far we have come in the world.  Of course, there is still hate, but let’s remember that there are also great love and connections.  We live in this most unusual moment in human history.  The Internet, technology and the media have brought the world much closer on many levels; however, at the same time, fear of the other remains and there are backlashes against this move towards tolerance.

Just as the Omer can help us move from anxiety to anticipation, we know that we can overcome acts of hate with words of kindness and interfaith cooperation.

Let us realize that being open to a moment, to approach it with a sense of opportunity and not dread, to bring our small amounts of barley even if we are not sure if our fruits will grow, bring us a sense of calm and well being.

May the coming days as we build towards Shavuot be filled with blessings for us, for the Jewish people and for all humanity and let us say, Amen.